By Jesse Thompson and Alicia Perera 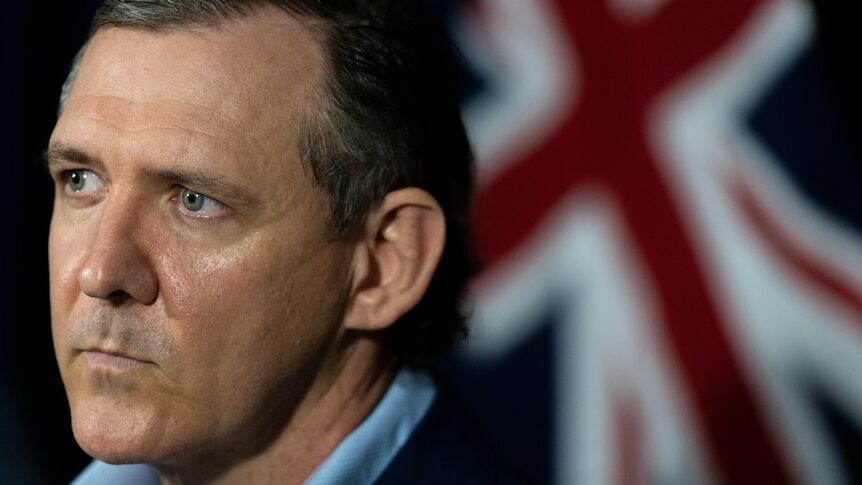 The Northern Territory government says no users of its COVID-19 check-in app have been notified if they attended a venue at the same time as a positive case over the past week, because of a significant reporting failure.

Chief Minister Michael Gunner made the admission today after reporting 546 new COVID-19 cases in the 24 hours to 8pm last night, and a slight rise in hospitalisations.

There are now 27 people with COVID-19 receiving hospital care — up from 24 yesterday — including 20 people receiving acute care and one in ICU.

Authorities say there are about 3,300 active cases across the NT and three quarters of those are in the Greater Darwin region.

The lockouts in the remote Central Australian communities of Yuendumu and Yuelamu have been extended by five days to next Thursday after the number of cases in those areas grew to 43.

Mr Gunner said the extension was needed to give authorities time to conduct more testing.

However, Mr Gunner said, the cases were largely confined to a few households, and Yuendumu's vaccination rate had risen to 78 per cent first dose and 58 per cent fully vaccinated.

"This is a solid jump over the last few days, which is encouraging, and I thank everyone in Yuendumu who said yes to the vaccine," he said.

There were no new cases in the community of Amoonguna, south-east of Alice Springs, which entered lockout after 16 cases were reported yesterday.

The lockout in the community is set to end on Tuesday.

Chief Health Officer Hugh Heggie said he felt "some comfort" that the Territory's COVID-19 case numbers had steadied in the past week.

"We have seen a degree of stabilisation of the total numbers, but [we are] expecting a surge on those numbers, when we have people coming back from holidays or workers [who] come here," Dr Heggie said.

"The hospital presentations ... and, particularly, the ICU admissions – currently, just one person – would suggest that we're not seeing a broad Delta outbreak."

Employee stood down after check-in bungle

Meanwhile, Mr Gunner said an employee in the emergency management centre had been stood down because of a "reporting failure" related to the government's check-in app.

The app is intended to send automatic messages to people who have visited venues at the same time as people with coronavirus and encourage them to monitor for symptoms.

But Mr Gunner said authorities yesterday learned no messages had been sent over the past week.

"It was a clear decision and a clear direction by the security and emergency management committee.

"The person responsible for tasking this decision has been stood down from the emergency operations centre and will return to regular duties."

Meanwhile, the government says the system will return to working as usual this afternoon.

Mr Gunner said the error had been detected after the Territory government had requested an update on the notification process.

He apologised for the error.

"Territorians have a right to be told when they have been to an exposure site," he said.

"It will happen now."

NT Police Acting Commissioner Michael Murphy said processes and governance at the emergency operations centre had been strengthened since.

"We can't afford to make mistakes," he said.

On-selling of RAT tests under investigation

Acting Commissioner Murphy also said police were investigating a case of RAT tests being on-sold for profit in Darwin, by people who were obtaining them from government-run testing centres for free then advertising them for sale on social media.

It comes a day after the Northern Territory government expanded the use of RAT testing in the Territory.

Acting Commissioner Murphy urged anyone who heard of tests being on-sold to contact police.

"The rapid antigen tests, obviously, we need to moderate the supply and demand, [for] priorities across community," he said.

"These, if you need them, are available at [the East Arm COVID-19 testing centre] and other sites across the Territory, for all people returning to the Northern Territory, or if you do have the need [because you] have symptoms."

Dr Heggie said there were enough rapid antigen tests in the NT to meet local demand, but that it was important those tests went to the people who needed them and not to people who were merely worried.