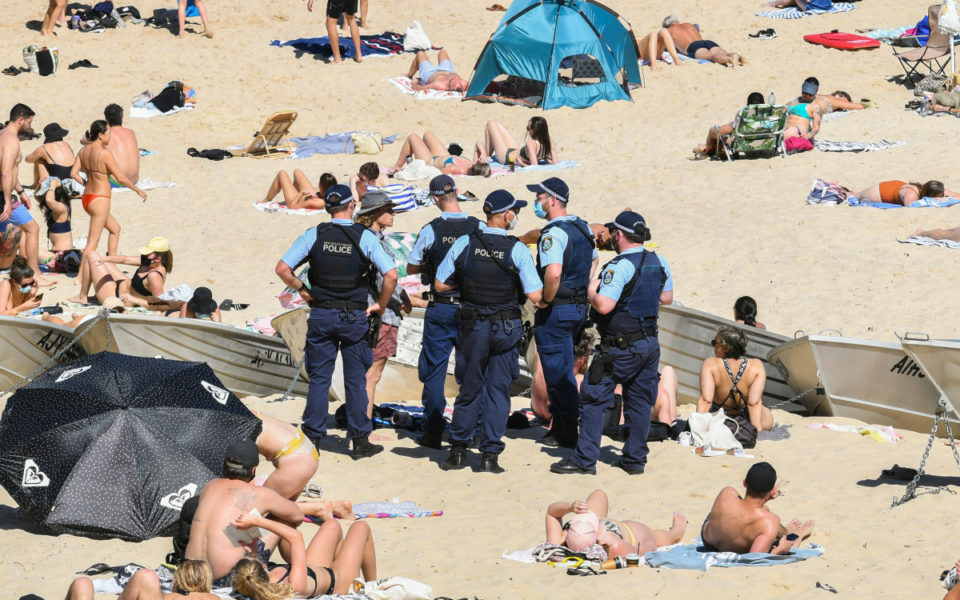 British Prime Minister Boris Johnson will abandon the introduction of domestic vaccine passports as his government says it is unlikely the country will ever return to lockdowns.

Mr Johnson, who in the coming days will announce Britain’s plan to deal with the pandemic during the colder months, is also expected to end some emergency powers granted during the pandemic, despite a rise in COVID cases.

The move comes as much of NSW wakes to relaxed restrictions, while residents in Victoria and the ACT are hoping for updates on when their lockdowns will ease.

The British decision comes as members of the ruling Conservative Party objected to vaccine passports as an unacceptable burden on businesses and an infringement on human rights.

British Health Secretary Sajid Javid said he did not anticipate more lockdowns and that vaccine passports would not be introduced in England, as the government relied instead on vaccines and testing to defend the public.

“Now that we’re entering autumn and winter .. the Prime Minister this week will be setting out our plans to manage COVID over the coming few months and in that we will be making it clear that our vaccine program is working,” Mr Javid told Britain’s Sky News.

NSW, meanwhile, has been warned of a “challenging” two months ahead with the state’s COVID-19 cases still yet to reach their peak.

It comes as Victorian health authorities are urgently investigating an “emerging significant outbreak” at the Fitzroy Community School in inner Melbourne.

Read on for more on that, and for all the other latest Australian lockdown news.

Victorians have, meanwhile, been told to expect a more detailed roadmap out of their lockdown soon, as much-anticipated modelling inches closer to completion.

Premier Daniel Andrews said the state government would receive detailed modelling from the Burnett Institute in coming days, before the “caveated” blueprint is laid out “in about a week’s time”.

The modelling will allow health authorities and ministers to formulate plans about what businesses can open and when, on the path to fully vaccinating 80 per cent of Victoria’s eligible population.

Victoria has previously announced a minor easing of restrictions when the state hits 70 per cent first dose coverage, which is likely within days. They include an extra hour of outdoor activity and the expansion of the five-kilometre travel radius to 10 kilometres.

Of the 392 cases reported on Sunday, 255 were from Melbourne’s north and another 89 from the western suburbs.

The federal government has responded to the surge of cases in those regions by sending an extra 417,000 Pfizer and Moderna doses to Victoria as part of a three-week blitz.

A plan to return students to classrooms, including upgrading ventilation in schools and staggered entry times, will form part of the more comprehensive roadmap.

From Monday, children aged from 12 to 15 years will be able to get a Pfizer vaccination in Victoria.

Premier Gladys Berejiklian said there had been some stabilisation of infection numbers in the local government areas of concern but the virus was “picking up pace” in certain suburbs.

“We can’t afford to let our guard down,” Ms Berejiklian said at the last press conference of its kind on Sunday.

From Monday, the daily 11am updates were to be replaced by a video from NSW Health to communicate case numbers and concerns of the day. However, Ms Berejiklian has since confirmed she will hold an 11am briefing on Monday.

There were 1262 local COVID-19 cases and seven deaths, including a man in his 20s, recorded in NSW on Sunday.

As of 12.01am on Monday, up to five fully vaccinated adults who live outside the councils of concern can gather outdoors within five kilometres of their home.

Vaccinated households that live in the 12 local government areas of concern will be able to gather outdoors for recreation for one hour outside curfew hours and within five kilometres of home.

The seven deaths reported in the 24 hours to 8pm on Saturday include a man in his 20s from western Sydney and six people from south-western Sydney in their 40s, 50s, 70s and 80s.

Asked to respond to images of people flocking to beaches in Sydney’s east at the weekend, chief health officer Kerry Chant said it caused her “some concern” but said the reality was outdoor environments were “probably the safest” if people were social distancing.

“I would like to see that people are really respectful and they are adhering to the public health orders as they move about,” she said.

By midnight on Friday 78.1 per cent of the over-16 population in NSW had received a first dose of a COVID-19 vaccine, and 45.6 per cent were fully vaccinated.

Canberrans could soon learn if the ACT’s COVID-19 restrictions will be eased as scheduled.

Stay-at-home orders have been in place across the national capital since August 12. A major announcement is due on Tuesday, ahead of the expected end of lockdown at midnight on Friday.

Asked about trends in the ACT’s case numbers, chief health officer Kerryn Coleman described them as “stable”, adding more information was on the way.

The ACT had 15 new cases on each of Saturday and Sunday. In the latest reporting period, nine patients were in the community when infectious and eight of the cases were linked to a known source.

There have been 493 cases in the latest outbreak and 239 remain active with 10 people in hospital and three in intensive care.

Canberra announced a one-week lockdown on August 12, which was extended by a week as cases kept coming. The stay-home orders were subsequently stretched to September 2 and then to Friday at midnight.