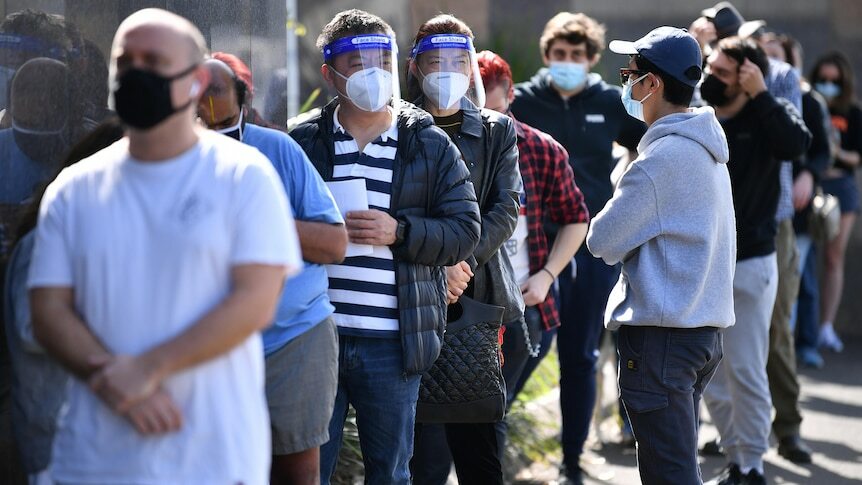 The NSW Health Minister says people who fear losing income are dying at home from COVID-19 without any medical care as the state breaks another daily case record.

NSW recorded 1,599 locally acquired COVID-19 cases in the 24 hours to 8:00pm on Friday — the highest ever recorded in any Australian jurisdiction.

Eight people with the virus died in the reporting period, all of whom were unvaccinated and had underlying health conditions.

Two people died at home without ever knowing they had COVID-19.

Health Minister Brad Hazzard said some people who became seriously ill were not coming to the attention of NSW Health or even a local GP as they were reluctant to come forward for care.

He said the virus was highlighting the inequalities that exist within some communities and some people feared testing positive and consequently losing work.

"The most important thing is to stay alive," he said.

"I say to those people, the federal government and the state government have put up economic packages, there is also lots of other support for you.

There are currently 1,164 COVID-19 cases admitted to hospital, with 221 people in intensive care, 94 of whom require ventilation.

A unit block in the suburb of Kingswood in Sydney's west has been locked down after five residents across three apartments tested positive to COVID-19.

The Nepean Blue Mountains Local Health District said there was a close-knit group of residents who had been moving between the units.

"The residents’ close and frequent interactions with each other are similar to those in a family household and as a result, all residents are considered close contacts," a spokesperson said.

On Friday, the Premier announced the daily 11:00am COVID-19 press conferences would cease from Monday and that she and the Health Minister would only address the public on a "needs basis".

The mayor of one of Sydney’s 12 hotspot LGAs labelled the decision as an "insult to the community" at a time when the state is in crisis.

Mr Hazzard said the press conferences were stripping the Premier, himself and the state's most senior health officials of around 70 hours a week which could be better used to manage the pandemic.

"You think it is just for one hour … but in fact, there is the preparation for the morning … there is a massive team of getting ready and drawing in all the information — we are here about three or four hours beforehand," he said.

"That time is taken out from the time we need to do the things you want us to do."

He said as the state enters the peak of the Delta outbreak in the coming weeks there will still be regular press conferences, just not every day.

In response to news that former Prime Minister Tony Abbott was fined yesterday for not wearing a mask in public, Mr Hazzard said the rules were for everyone, with no exceptions.

“It does not matter who you are, whatever station you have in life, there are orders. Nobody likes to have these orders but it is to keep everybody safe and I hope people will comply with the orders."

NSW Police said Mr Abbott was fined $500 for breaching the public health orders at the Manly Beach promenade after he was photographed by a bystander.

To date, just over 77 per cent of the over-16 population in NSW has received the first dose of a COVID-19 vaccine and 44.5 per cent are fully vaccinated.

Mr Hazzard acknowledged there was a supply problem with Pfizer that could delay the vaccination uptake for those under 18.

Last month, while announcing the back-to-school roadmap, Education Minister Sarah Mitchell said it was "strongly encouraged" that students aged over 12 get a jab before returning to the classroom in October.