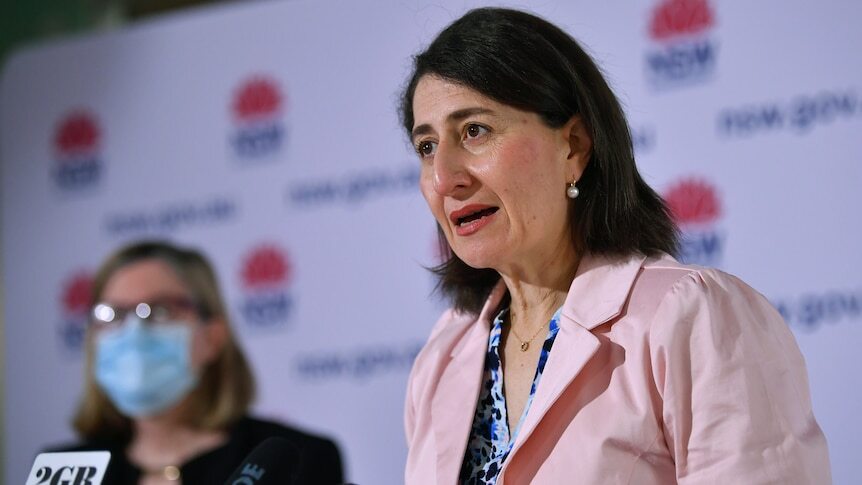 The daily briefings, which have become a fixture of the pandemic, will cease from Monday despite the state government's own projections showing climbing infection and hospitalisation rates.

Included in Sunday's fatalities were a Western Sydney man in his 20s and a south-western Sydney woman in her 40s.

On Friday, the Premier said that from now on NSW Health would be publishing daily videos outlining the latest information, and that she and the Health Minister would appear "intermittently" on a "needs basis".

During her final daily appearance on Sunday the Premier rejected suggestions she was going into hiding or avoiding public scrutiny.

She said the government would still be providing "ample information".

"I will not necessarily be the one providing the information on a daily basis, and that is because, as I have said, I need a clear head," Ms Berejiklian said.

"I will still be a regular feature at 11:00am but not every day, and I was very upfront about that.

"I need to make sure the government runs, gets back to its usual processes as quickly as possible … the government has to get used to not running in crisis."

When the Premier was asked if she was the target of or would be asked to give evidence to an Independent Commission Against Corruption (ICAC) investigation, she said it was "inappropriate to comment on any ongoing matters".

After more inquiries around the ICAC probe were raised, a press secretary for the Premier could be heard telling journalists "last questions, please".

Ms Berejiklian ended the press conference shortly after — about 20 to 30 minutes earlier than usual.

Dr Chant said she hoped to see a "sustained decline" in infections from next week.

"Those projects depend on how effectively we can control the spread outside the local government areas (LGAs) of concern," she said.

According to NSW Health's own modelling, infections are anticipated to peak this week, and hospitalisations will surge until mid-October.

From Monday, people across NSW who have received both doses of the COVID-19 vaccine and who don't live in an LGA of concern will be afforded more freedoms, including being able to have up to five people for a picnic.

In the 12 LGAs under enhanced lockdown orders, households of vaccinated adults will be able to have outdoor recreation for up to two hours outside curfew, but will have to stay within 5 kilometres of their home.

The first rollout of more substantial freedoms will occur on the Monday after 70 per cent of the NSW population is fully vaccinated.

The ABC projects that will happen in the week of October 11.

Dr Chant said there were "little signs of hope of stabilisation" of cases in the 12 LGAs of concern, but she was concerned about an increase of cases in Sydney's inner suburbs like Glebe, Camperdown, Redfern and Waterloo.

There were 161 recorded cases recorded overnight in the South Eastern Sydney Local Health District (LHD), and 135 in the Sydney LHD.

The Premier warned the community not to be complacent, after beaches in Sydney's east, where the Delta outbreak began on June 16, were crowded in recent warm weather.

"We know that people are tired after the enormous things we've been asking of them, [but] we must stay the course," Ms Berejiklian said.

"We know the weather adds to our positivity … we cannot let down our guard. And as much as we would love to think about things we can offer people between now and [October], we have to take a very safe and cautious approach."

There are currently 1,206 COVID-19 cases in hospital, with 220 people in intensive care, 92 of them on ventilators.