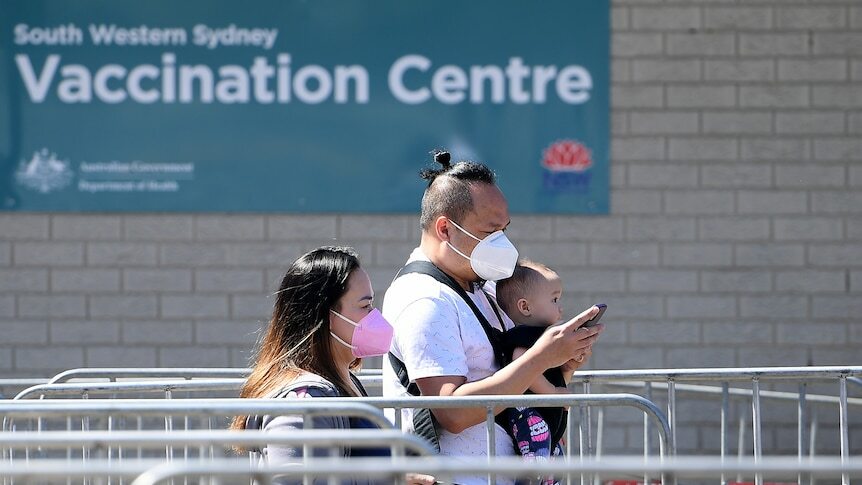 More than 90 per cent of people in NSW aged 16 and over have now had at least one shot of a COVID vaccine.

Data released by the federal government this afternoon confirms 121,514 doses were delivered across the state on Friday.

This means that 90.1 per cent of those aged 16 plus have at least some protection, with 72.8 per cent now fully vaccinated.

Nationally, 81.93 per cent of this cohort have had one jab and 61.22 per cent are fully vaccinated.

After earlier saying the state was "coming close" to reaching the target, Premier Dominic Perrottet posted a congratulatory message on social media.

"We've hit 90 per cent of first dose coverage, and close to 73 per cent double-dose in NSW," Mr Perrottet said.

"Eighty per cent is just around the corner. Let's go NSW!"

The news comes as the state prepares to reopen on Monday, October 11, after more than 100 days in lockdown.

People who have had two doses of a COVID-19 vaccination will be allowed a number of freedoms including going to the gym, restaurants and travel beyond 5 kilometres.

Mr Perrottet's post generated mixed reactions with some people expressing concern the state's reopening was happening too fast while others were looking for more changes to the next phase of the COVID exit plan.

At today's briefing, Mr Perrottet warned the state was heading into a "difficult time".

"We want to make sure that we open up well on Monday," he said.

"I want to make the point today, and I'll be making it again tomorrow, it's going to be a difficult time as we do open up."

He also said case numbers and hospitalisations were expected to increase.

"Naturally we will see as NSW opens up case numbers increase and hospitalisations increase. That is a natural part of opening up.

"We will learn to live alongside the virus but importantly we have to get that vaccination rate continuing to increase."

Eight of the COVID-19 deaths were from Western and south-west Sydney and three from south-eastern Sydney.