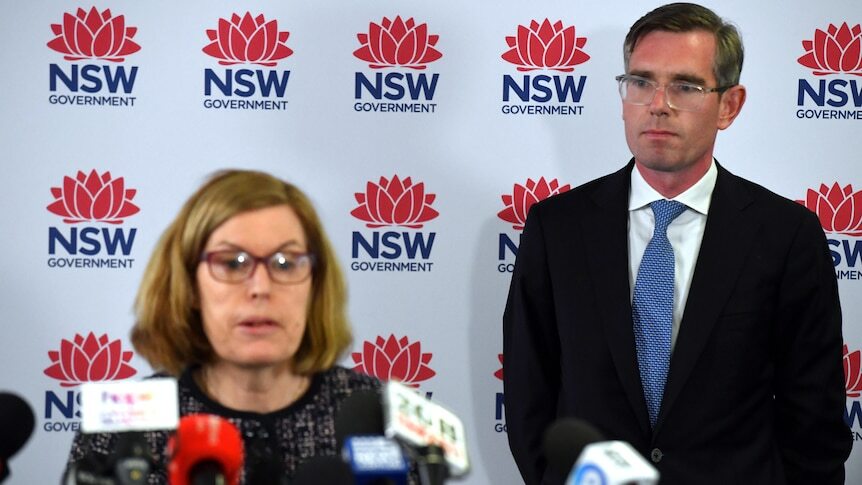 NSW Premier Dominic Perrottet has defended his government's decision to lock down Western Sydney, despite an email from the state's Chief Health Officer urging restrictions to be "consistent" across the city.

Labor has obtained an email sent from Kerry Chant to the Health Minister Brad Hazzard.

In it, Dr Chant recommends to "implement consistent measures across greater metropolitan Sydney with outdoor masks, consistent 5km rule and authorised workers only".

The email was sent on August 14, seven weeks into lockdown due to the Delta outbreak, when the 12 Local Government Areas (LGAs) in Western and south-west Sydney had already been identified as hotspots.

Those 12 LGAs were hit with harsher restrictions including a curfew.

The publication of the email has started a war of words between the two major parties, with NSW Labor leader Chris Minns saying the state government had been "caught red-handed" not following Dr Chant's advice.

But Mr Minns said the email revealed the government didn't follow the health advice as it previously claimed.

"The first bit of evidence we've got indicates that it's the opposite of what the government is claiming in the middle of the pandemic," Mr Minns said.

"If they've got further information to release, we're all ears, I suspect we will never see it."

The email also contained a recommendation from Dr Chant to "intensify the action of Western Sydney and Nepean Blue Mountains where case numbers are escalating".

The ABC understands all formal health advice was given through crisis cabinet, which is bound by Cabinet-in-Confidence.

Mr Perrottet was part of crisis cabinet as Treasurer.

"We've always sat there, critically considered the health advice, the economic advice and done everything we can to make the right decision for the people of our state," Mr Perrottet said.

He has also attacked the Opposition for politicising the situation.

"If Labor want to talk about a class divide, a two-tiered system, they can play that game every single day of the week," he said.

"The Liberals and Nationals, my team, will talk about a united New South Wales every single day."

"This whole victim mentality about Western Sydney has to stop," Mr Ayres said.

"This whole concept of two-tiered cities has got to stop.

"I think Labor want to project the concept of a victim mentality, that's not the Western Sydney I know."

Mr Ayres was also a member of crisis cabinet during lockdown.

"The health advice could not have been clearer to cabinet ministers," he said.

"It was 'focus your efforts where the virus was'."

The Opposition Leader has denied he's projecting a victim mentality.

"I'm not accusing the people of Western Sydney of being victims but they've got every right to feel they're being picked on by their own government," Mr Minns said.

"I suspect that Stuart Ayres would love everybody in Western Sydney to stand up and give the government a round of applause.

"But surely they've got every right to be outraged by the way they've been treated."