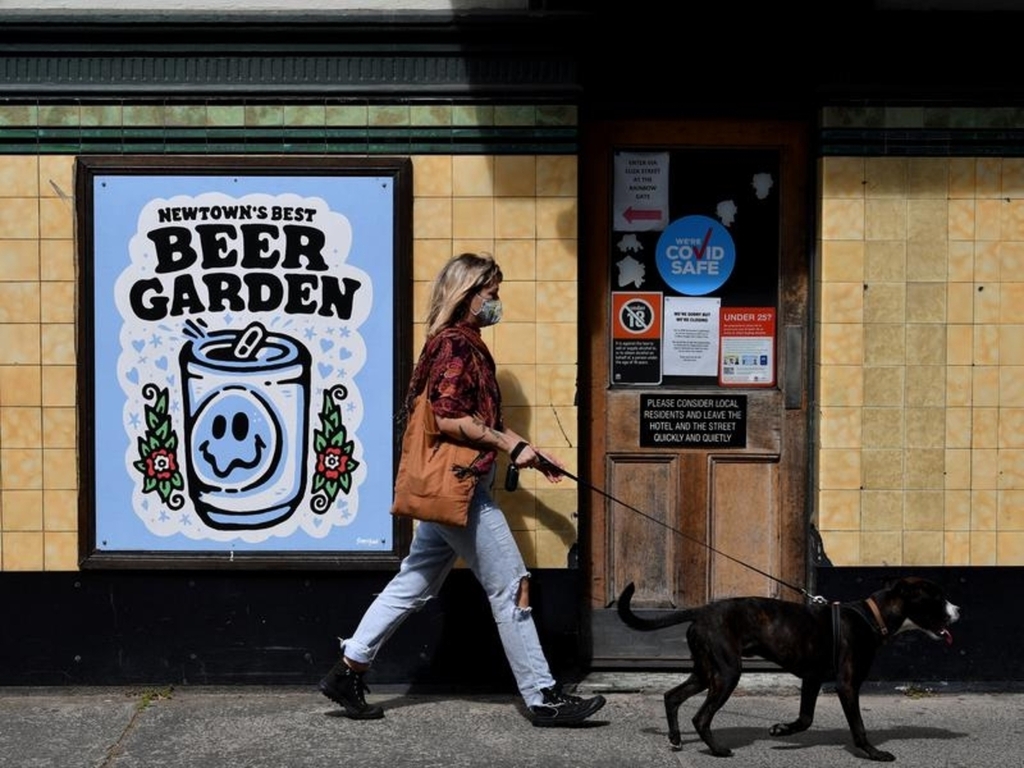 Fully vaccinated people in NSW will be able to visit family and friends who've been double jabbed, dine out, go to the hairdresser, gym or football as well as travel, once the state hits 70 per cent coverage next month.

But the government has emphasised some restrictions on movement may still apply in areas where COVID-19 case numbers are too high.

NSW recorded 1405 new local COVID-19 cases in the 24 hours to 8pm on Wednesday as the government flagged an end to lockdown in several regional areas, including the north coast and the NSW southwest.

The state also recorded five deaths - a woman in her 40s, two women in their 70s and two men in their 80s - all from Greater Sydney.

The deaths take the toll for the current outbreak to 153.

Premier Gladys Berejiklian on Thursday revealed the state's roadmap out of lockdown, which begins at 70 per cent double-dose vaccination coverage, with the milestone expected in mid-October.

Restrictions will ease on the Monday after the milestone is reached when five fully vaccinated adults plus children are allowed to visit a vaccinated person's home.

Up to 20 fully vaccinated people can also meet up outdoors.

Hospitality venues can reopen subject to the "four square metre" rule, as can shops, while the unvaccinated can only access "critical retail" like supermarkets.

Personal services such as hairdressers can reopen with the same four square metre rule, as can gyms and swimming pools.

Stadiums can again host events, capped at 5000 people with the four square metre rule, and up to 500 people can attend ticketed and seated outdoor events.

Cinemas, theatres, museums and galleries can also reopen and up to 50 vaccinated guests can attend religious services, weddings and funerals.

Visits to aged care homes will also be permitted again, with limits.

"You have been warned - come forward and get vaccinated or you won't be able to participate," Ms Berejiklian told reporters.

"If at the time we open there are high case numbers in a concentrated area, it may well be that vaccinated people will be able to undertake everything on the list but within their own local community rather than having the freedom to travel.

"We're not suggesting case numbers are going to go down at all during this period - when you reopen, you expect an increase in case numbers, but if it's in the vaccinated population our health system won't be troubled."

Ms Berejiklian reiterated these freedoms would be policed through adding a vaccination status feature to the state's QR code check-in system.

"If you want to go and buy something in what is regarded as a non-essential shop, you will put up the QR code and if it is not a green light saying you have been vaccinated, you won't be welcome inside," Ms Berejiklian said.

However, the government will continue to recommend work-from-home arrangements where feasible, and masks will remain mandatory indoors.

Travel to regional NSW for the fully vaccinated will also be permitted again.

From Saturday lockdowns will also be lifted for parts of regional NSW deemed low risk, such as the north coast, but not for large swathes of western NSW.

Deputy Premier John Barilaro said that snap lockdowns would be declared for regional areas where even one case was detected. This policy would remain in place until 70 per cent double-dose coverage.

There are 1175 COVID-19 patients in NSW hospitals with 202 in intensive care and 80 ventilated.

In a concession previously announced, outdoor gatherings of up to five fully immunised people will be allowed from Monday outside Sydney's 12 virus hotspot areas.