Penrith have reminded North Queensland of the distance between them and the rest of the competition while Brisbane pulled off a remarkable comeback against the Titans as Payne Haas copped it from the Lang Park crowd.

Check out all the scores, news and stats below.

The Titans led 18-0 and 24-4, but conceded 31-straight points thanks to some brainless decisions in a rollicking Friday night derby at Suncorp Stadium.

It came a day after prop Haas's extraordinary request for an immediate release from the club was denied, the 22-year-old and his management testing the waters after negotiations on a rich, new deal stalled.

He showed up to play but his move drew sustained boos from the 32,864 crowd as combatant and Gold Coast captain Tino Fa'asuamaleaui (228 run metres and 18 runs in the first half alone) powered the Titans' dominant start.

It all crumbled though for the visitors, the win Brisbane's sixth-straight — and second-straight without the injured Adam Reynolds.

The Titans fell to 3-9 and likely now three wins outside the top eight.

It followed a similar tale to last year's Suncorp Stadium clash, the Titans giving up a 22-point lead to lose — something they also did against Canberra earlier this year.

On-fire Gold Coast halfback Toby Sexton set up two of their three tries before Selwyn Cobbo's intercept stopped a fourth and his brave run that followed swung the tide.

In a mad two minutes, Sexton went off injured and Esan Marsters joined Sam McIntyre in the sin-bin for professional fouls.

Cobbo scored in the corner but Tom Flegler's knock-on from the restart let the 11-man Titans off the hook.

Back from injury, Fifita stormed from dummy half to score a crucial try and stunt Brisbane's surge.

Tanah Boyd then did enough in a desperate tackle to dislodge the ball as Kurt Capewell looked for a pass to Corey Oates for a certain try to end a wild and wacky first half.

Just when the Titans looked settled more madness set in with three tries in six minutes.

Te Maire Martin sliced through to score before the Titans, despite being up 24-10, opted for a short restart that backfired badly.

Cory Paix beat the Titans to it, breaking straight through to gift Jordan Riki a runaway try.

Herbie Farnworth, after Jamayne Isaako spilt a simple bomb, then muscled over to make it a two-point game with 22 minutes still to play.

Gold Coast settled briefly again when Sexton returned but an Ezra Mam cut-out pass and neat kick back infield from Corey Oates allowed Capewell to score the go-ahead try with 10 minutes to play.

Farnworth then busted a ninth tackle for the evening, flicking an inside ball to Mam for the match-sealer and Tyson Gamble iced it with a field goal.

Penrith's long run of dominance has rolled on as they halted North Queensland's NRL streak of six straight wins with a 22-0 defeat of the Cowboys at Bluebet Stadium.

In another clinical night for the Panthers, the hosts dominated ball, territory and the scoreboard to ensure a four-point lead at the top of the table entering the representative period.

Dally M leader Isaah Yeo was again Penrith's best, while Jarome Luai impressed and Nathan Cleary ran the game with ease in their last match before State of Origin.

The only concern for NSW coach Brad Fittler could be a potential late shoulder charge from five-eighth Luai on Scott Drinkwater.

And while their heavy Origin contingent means Penrith will be hit hard in the next two months, the question remains: can anyone challenge the Panthers in 2022?

Only Parramatta have beaten Penrith in the opening 12 rounds, but the Eels have otherwise struggled for consistency.

In comparison, Penrith have easily dispatched of second-placed Melbourne, seventh-placed Sydney Roosters and third-placed North Queensland in the three weeks since that loss.

Their first try on Friday night came through Yeo when Apisai Koroisau darted out of dummy-half and put the lock through to score.

The next came when Izack Tago broke down the left edge after some nice work from Viliame Kikau and Jarome Luai, before a speculator pick-up helped Dylan Edwards cross.

Another try came when they stripped the Cowboys for numbers and Brian To'o crossed before halftime.

Five-eighth Luai put Taylan May over for Penrith's only try in the second half.

Luai aside, the other worry for Penrith will be whether Kikau is charged over a late shot and dangerous throw.

North Queensland were not as bad the scoreboard suggested.

They completed at just 60 per cent but were barely given a chance to get on the attack as the Panthers controlled almost all the ball on the Cowboys' line.

And to North Queensland's credit, they were able to continually hold on.

At one stage in the first half the Cowboys held out 28 straight plays before Izack Tago crossed only to put his arm on the line while planting the ball down.

Penrith usually average a try every 8.5 plays in an opposition's 20-metre zone according to Fox Sports Stats.

But on Friday night that figure ballooned out to one in every 17 plays in a statistic that defined North Queensland's resilience.

But still, the Cowboys would have been disappointed they were wasteful with their opportunities.

Valentine Holmes bombed their best chance, dropping the ball just short of the line early in the second half when they could have launched a fightback.

Griffin Neame also lost the ball under the posts midway through the second half. 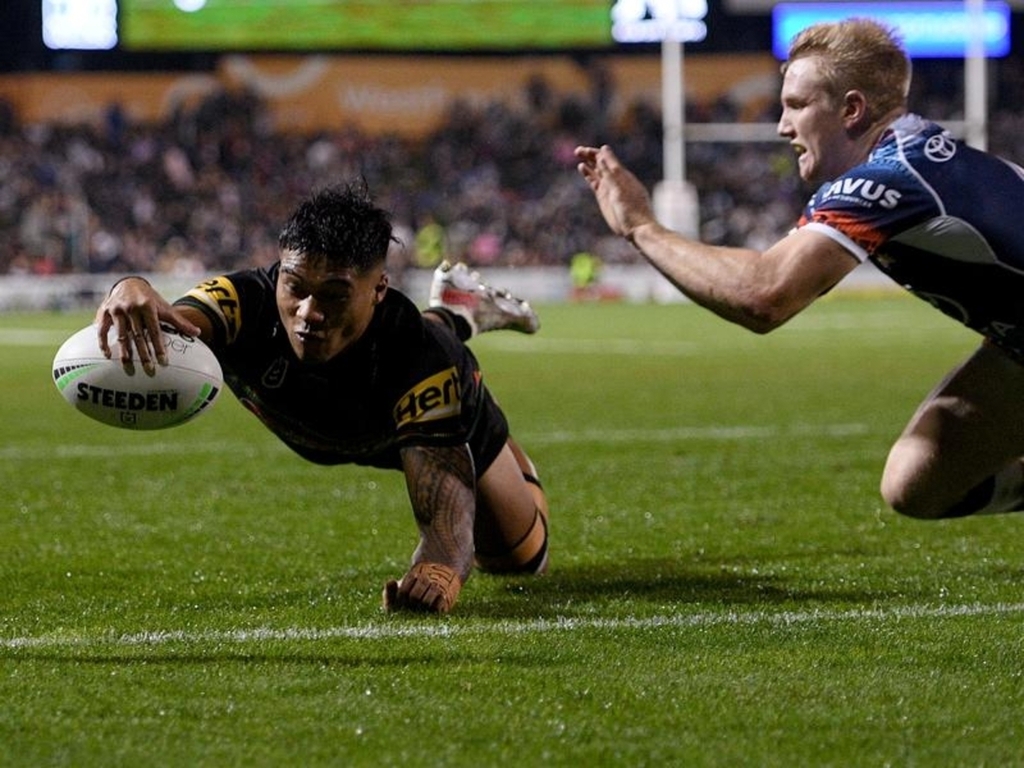