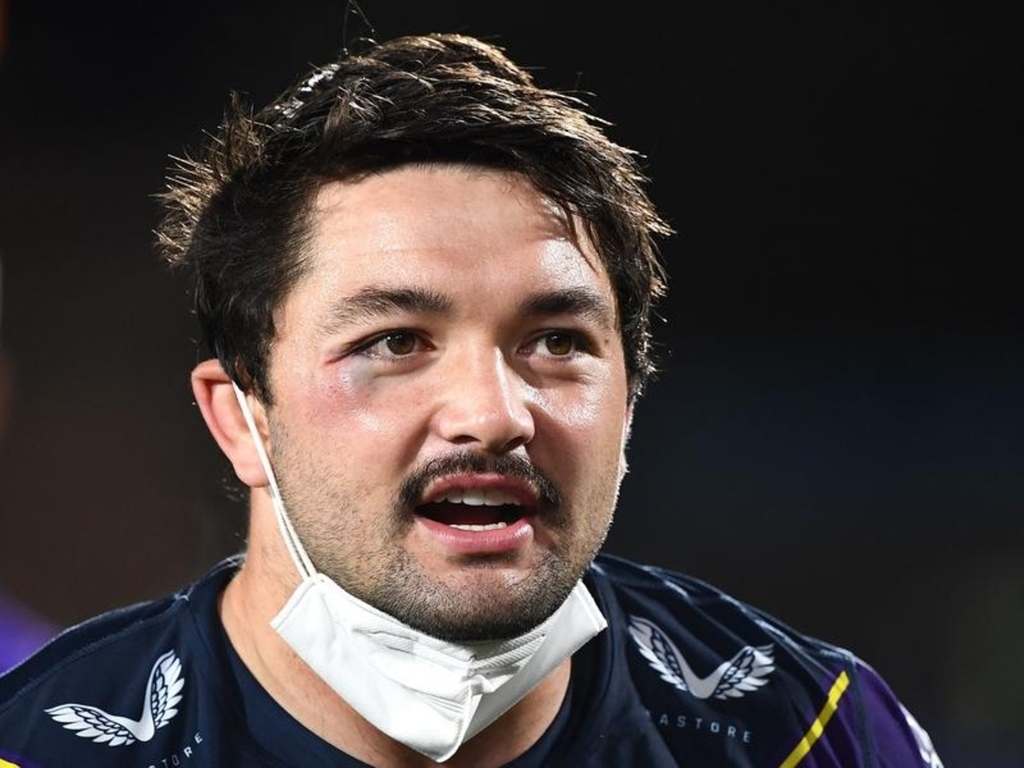 While Christian Welch can see the funny side, Brandon Smith's suspected facial fracture is no laughing matter for Melbourne as they prepare for yet another NRL preliminary final.

Smith lasted just 18 minutes before being forced off the field in Friday night's 40-12 qualifying final rout of Manly at Sunshine Coast Stadium.

But he did enough in his cameo to show why he is such an important cog in the seemingly unstoppable Storm machine that has now rumbled to their seventh straight preliminary final.

The nuggety No.9 set up two tries as Melbourne romped to a point a minute 16-0 lead before coming off second best in a head clash with Josh Aloiai.

There are real concerns for Smith, who suffered two facial fractures last year - not that you could tell speaking to Storm prop Welch.

"He is starting to swell up but he's got chubby cheeks to start with so it's hard to work out where the swelling is," Welch said.

"But he is such an important guy for us.

"I am not sure what the (recovery) timeline is but it is a huge benefit having a full two weeks to get back up for a prelim."

The Storm earned a week off with the six tries to two thumping, and coach Craig Bellamy was keeping his fingers crossed Smith could bounce back for their grand final qualifier.

"They think he might have a facial fracture," he said.

"It doesn't look like it's displaced. His face has not blown up too bad. But we'll just have to get the scan (on Monday) and see what's happening from there.

"But knowing Brandon, he'll be doing everything he can to play again."

But there are no fitness concerns for two of their biggest stars - five-eighth Cameron Munster and fullback Ryan Papenhuyzen.

Munster was in doubt ahead of kick-off after being hospitalised last week with an infected knee - not that onlookers could tell on Friday night.

The playmaker celebrated his 150th game by setting up two tries and putting on a kicking masterclass to help Melbourne keep a tight leash on Manly No.1 Tom Trbojevic.

"Him just playing even if he is not 100 per cent, it really gives a lot of confidence to the group having him in the starting group," Welch said of Munster.

Papenhuyzen has also bounced back to his best after recovering from concussion issues, scoring either side of halftime to take his try tally in the past fortnight to five.

"I have had my fair share of head knocks and it's tough (coming back)," Welch said.

"It is not easy getting your confidence back but I would like to think that he's turned the corner."