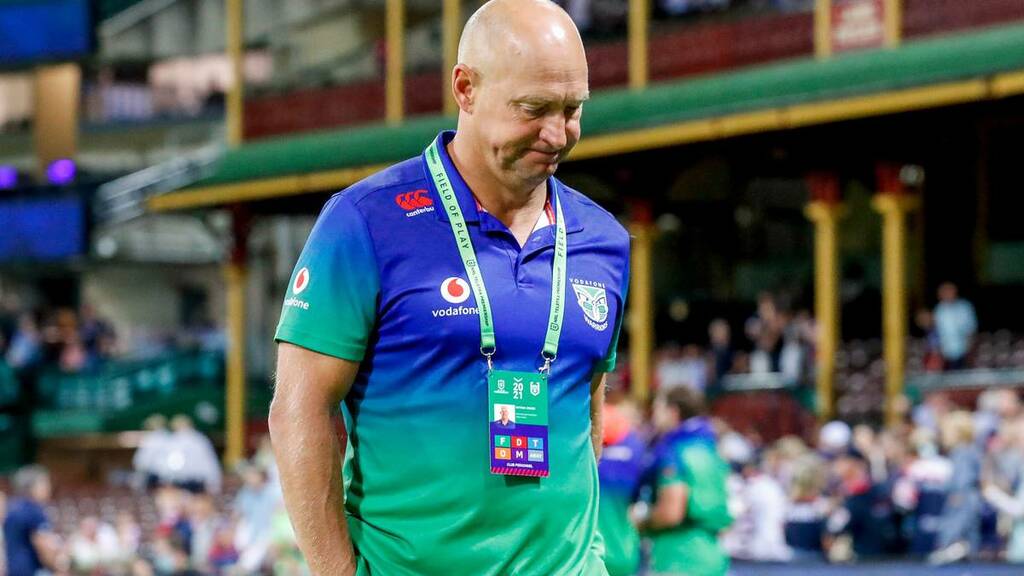 Warriors coach Nathan Brown has expressed regret about the way his side ended their season, but he refuses to hang his players out to dry over the ugly scenes during the 44-0 defeat to the Titans.

A brawl broke out in the second half of the game last weekend, which saw three Warriors players – Jazz Tevaga, Matt Lodge and Kane Evans – sin-binned within a minute of each other.

Warriors CEO Cameron George later spoke out against the actions of the players, saying there was "no excuse for it" and the club will "make sure it doesn't happen again".

The NRL announced on Tuesday that Evans will be suspended for five games, while Lodge and Reece Walsh both received one-game bans.

In a review of the Warriors' disappointing season, Brown said the team got it wrong in terms of their performance and their actions in their loss to the Titans.

"We got the performance wrong, I don't believe we prepped very well that week and then we played poorly," Brown told Newstalk ZB's D'Arcy Waldegrave on Tuesday. "And obviously we had some things unfold aren't what we want to be about as a football club or football team. I'm certainly not going to throw away the year as a whole because of that performance but we certainly need to make sure those types of behaviours don't happen again too."

Asked about the ill-discipline of Kane Evans, who threw punches in Sunday's melee and was also previously banned for attempting to punch Cronulla centre Will Chambers, Brown was quick to come to the defence of his player.

"He's had some great impacts on the club. Kane obviously has been, one or two times, to the bin and that, but when you see Kane around the group, his contribution to the younger part of the squad in particular has been outstanding," Brown said.

"Sometimes good people get some things wrong and it doesn't make anyone a bad person because they get a little thing wrong. If you actually look at Kane's situation in both occasions, he was in essence coming in to defend a mate. His loyalty is obviously very strong towards his teammates and that's stuff's priceless. It's just the game has changed and you need to be a little smarter in how we I suppose control our emotions.

"But he certainly wasn't going out of his way to do the wrong thing, his thing was more based on loyalty and protection. As I said the game's changed and now those sorts of incidents certainly get your foot in the sin bin and suspended as opposed to back in the day many years ago, you would've got a pat on the back for it.

"Sometimes the emotions can get a little bit better of people at different times but we just need to be supporting people and working through it. That's the best way to go but we certainly don't want to hang people out to dry for it that's for sure, publicly."

When it came to the Warriors' underwhelming season, Brown said the team will rue losing several close games, but added that bad luck and injuries played a part.

"We paid the price for losing a lot of close games. But I felt we certainly made some progress as a club and a squad. We're developing some younger players and during the year we managed to bring in some recruits, so it's certainly going to help our team move forward longer term. But also what we witnessed in the last game, we can't ignore that and we've got a lot of work to do.

"We had a lot of injuries. We only put the same thing on the field once now. It was only one occasion and that was not mainly down to selection but generally due to injuries and suspensions. We sort of had our team change a lot and changes in key positions. That certainly had an impact on us building combinations. We've got a review tomorrow with the players and the staff and I'm sure there's going to be some really good stuff that comes out of that."

Brown also admitted the Warriors' injuries may not have all to do with bad luck.

"When you have the number of injuries we had, there's going to be an element I'm sure where fate does play a part. [But] when you have so many, you've got to have a look at what you're doing as well. And that's not any one department, that's all departments from the coaching department to the high performance department to your medical team.

"We've all got to sit down and have a look there at where we can do things better. Certainly obviously bad luck does play some sort of part but we can't be fools and just think we were so unlucky with the amount of injuries we had."

Ultimately, Brown was confident that the Warriors can improve next season, especially if the team manages to get fewer interruptions during the pre-season.

"We'll get through our process over the next week and obviously we'll sit down and have to have a really good pre-season. As a staff we need to make sure we've got to get that right. And obviously as head coach you've got to play your part in that.

"If we can have a really good pre-season, which last year we were split in two different countries, so I thought we managed that part of the pre-season reasonably well. But coming together and being together wherever that may well be as a group for the pre-season will certainly help us.

"I'm very comfortable with the squad we've got. And if we manage the squad well and if we get some things right as a staff, I'd be disappointed if we don't make some nice improvement."