Novak Djokovic's calendar Grand Slam tilt is over, but his greatness continues to shine through 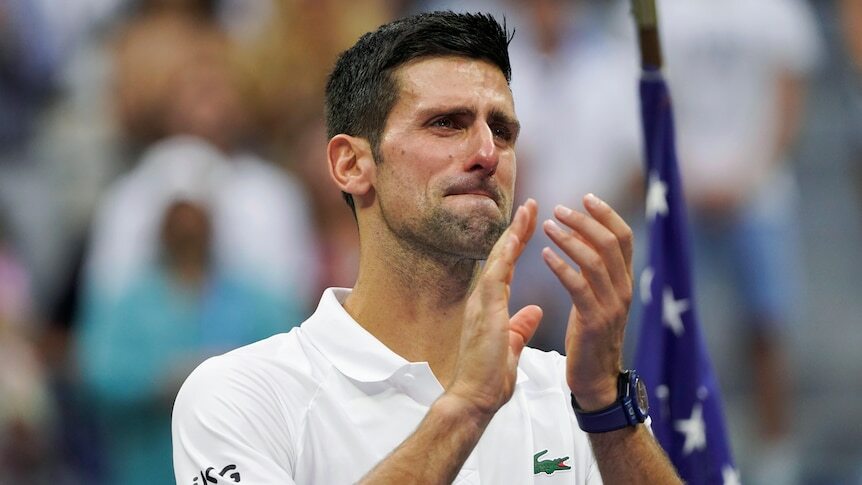 On paper, the Serbian great can look back on a dominant 2021 as owner of a 27-1 win-loss record in slams — however that one stinging defeat came at the worst time, right at the end of his glorious run.

On court though, he was miles away in the US Open final, blown apart by Daniil Medvedev — a mirror image of himself, just nine years younger and a full 10cm taller.

The difference between the pair's previous grand slam final meeting could not have been more stark.

In Melbourne in February, Djokovic bossed Medvedev all over the court, dictating play at every opportunity in a 7-5, 6-2, 6-2 victory that took less than two hours.

In New York, with an expectant crowd packed with movie stars, the roles were flipped.

Djokovic knew it, too.

At the final change of ends, he sobbed uncontrollably into his towel as his historic bid unravelled before his eyes, the emotional strain of attempting to emulate the great Rod Laver and a punishing calendar in which he was the standout favourite, finally taking its toll.

"I was below par with everything, to be honest," he said.

Djokovic said he was trying, that he did his best but, tellingly added, "my legs were not there", and that his overriding emotion was of "relief".

"I was glad it was over because the build-up for this tournament and everything that mentally, emotionally I had to deal with throughout the tournament in the last couple of weeks was just a lot. It was a lot to handle," he said.

That's true, so much so that he might never find himself in that position again, because a Grand Slam is the holy grail.

Grand Slams are rare. There's a reason for that

Despite falling at the final hurdle, it has been a 2021 to remember for Djokovic.

Most players end their careers without achieving what Djokovic has managed in just under 12 months.

With two Golden Slams confirmed on the final day of action at Flushing Meadows (by Dylan Alcott in the quad singles and Diede de Groot in the women's wheelchair singles), one can be forgiven for thinking that Grand Slams — winning all four majors in a calendar year — are relatively common.

To understand the scale of what Djokovic was attempting to achieve, you just have to look at the list of names of late that have not managed it.

Not since Graf, 33 years ago, has a player won all four majors in a single season.

The Swiss great came close three times in his career, coming unstuck on the clay of Roland Garros on each occasion; in 2004 to Gastón Gaudio and twice to long-term adversary Rafael Nadal in 2006 and 2007.

Nadal hasn't managed it either.

The closest he came was in 2010, when he won the last three slams of the year after retiring hurt in the Australian Open quarter-finals.

Neither has Serena Williams — the undisputed queen of women's tennis over the same two-decade time period that Federer, Nadal and Djokovic have reined supreme.

She had her best chance in 2015 — the last time any player went to Flushing Meadows with a Grand Slam at stake.

However, she lost out in the semi-finals to beaten finalist, Roberta Vinci.

Three of tennis's modern legends, none of whom can match Djokovic.

Djokovic is one of three players to have fallen at the final hurdle, having won the first three slams of the year: Martina Navratilova in 1984 and Williams in 2015 being the other two.

However, Djokovic has, in fact, held all four majors at once before — in 2015/16 his winning streak extended from Wimbledon in 2015 to the French Open in 2016 — something even his contemporary male companions have not managed in their careers, although Williams has done so twice in singles (and once in doubles).

Djokovic is a modern great

Djokovic's sporting immortality may be begrudged in some quarters, but it cannot be denied.

Much has been made of tennis's big three and how the inevitable march of time is reluctantly bringing their astonishingly dominant epoch to a close.

Djokovic, Roger Federer and Rafael Nadal have dominated tennis for close to 20 years.

Since Federer's first grand slam singles title at Wimbledon in 2003, one of the big three has claimed 60 of the 73 titles on offer.

Yet, despite the adoration and awe that Federer and Nadal's colossal 20-slam careers have garnered, Djokovic still seems like the odd one out, despite also having 20.

And, despite the emphatic nature of his defeat in New York, not many would bet against the 34-year-old adding an unprecedented 10th Australian Open title Down Under this summer.

With time marching on and both his greatest rivals recovering from surgery, there is no guarantee that 40-year-old Federer or 35-year-old Nadal will ever return to play at the very highest level again.

So, while acting arguably as the third wheel to Federer and Nadal's bilateral quest for greatness, Djokovic still has a chance to surpass them.

With the young crop of stars finally filling the vacuum left by their absence, their chances of overtaking Djokovic's tally appears distant, simultaneously bringing the curtain down on the highest quality era of tennis the world has ever seen and crowning the greatest of all time.

Djokovic has had to fight to earn the respect his achievements command, even if he has not done so to universal acclaim.

A calendar Grand Slam for any of those three men would have been an emphatic exclamation point at the end of an extraordinary era.

In failing to do so, Djokovic has not dulled his brilliance.