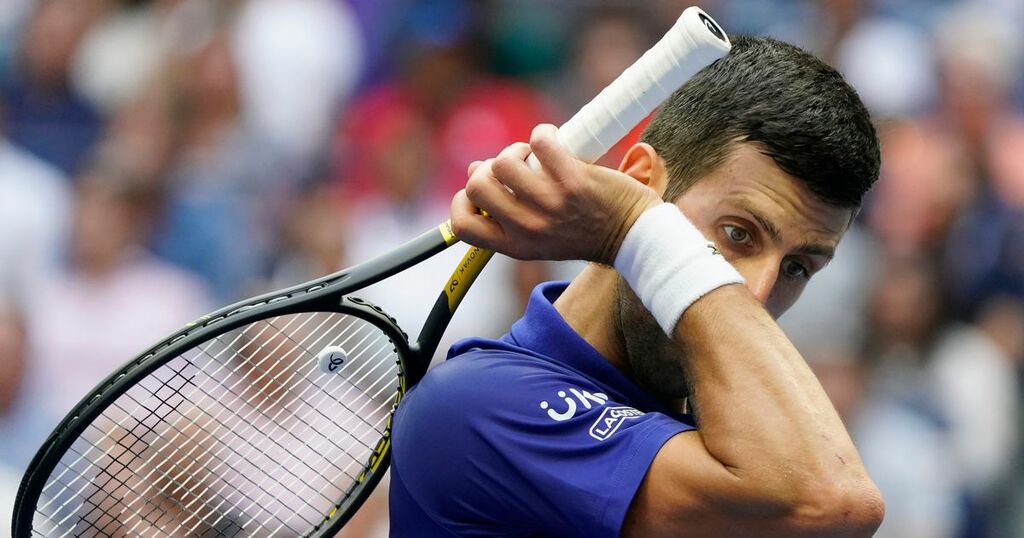 Novak Djokovic fell at the final hurdle in his bid to win the calendar Grand Slam as Daniil Medvedev claimed his first major title at the US Open.

By winning the Australian Open, French Open and Wimbledon titles, the world number one gave himself the chance to do what only Don Budge and Rod Laver have ever managed in the men’s game by claiming all four titles in the same year.

To add to the weight of history on his shoulders, victory would also have seen him move clear of his great rivals Roger Federer and Rafael Nadal and become the first man ever to win a 21st slam singles title.

He had tried to keep his mind in the present, refusing to answer questions about the Grand Slam after his quarter-final victory over Matteo Berrettini, but it was clear from the first moments of the final that he was battling himself as much as Medvedev.

Crucially, the Russian was good enough to take advantage, securing a 6-4 6-4 6-4 victory in his third slam final to at least strike a real blow for the younger generation against the old guard.

He wobbled in sight of the line, serving consecutive double faults from match point up at 5-2 after being heckled by the pro-Djokovic crowd, but the 25-year-old, who lost to Nadal in five sets in his first final in New York two years ago, composed himself to serve it out at the second time of asking.

The second match point brought another double fault but on the third Djokovic netted, with Medvedev falling to the court in celebration of a deserved victory.

He is just the second man born in the 1990s to win a slam singles title after last year’s champion Dominic Thiem and only the third along with Andy Murray and Stan Wawrinka to beat one of the big three in a slam final since Juan Martin Del Potro defeated Federer in New York 12 years ago.

Tennis and Hollywood royalty were in attendance in Arthur Ashe Stadium in anticipation of watching history being made but the tension flowing through Djokovic’s body was all too clear as he dropped serve from 40-15 in the first game.

Medvedev was well beaten by Djokovic in the Australian Open final in February but he showed in the opening set that he was not going to make the same mistakes, throwing in huge second serves and losing just three points on his own delivery.

The crunch moments came early in the second set. Djokovic had Medvedev at 0-40 in the second game but, unusually for a man who has a sixth sense for striking at moments of weakness, he could not take advantage.

The world number one then saved a break point but it was clear his internal pressure gauge was hitting the red zone and in the fourth game he could contain his emotions no longer.

Djokovic was extremely unfortunate to see a break point have to be replayed after the sound system burst into life mid-rally. Medvedev saved it, and then a second and, after missing a return at deuce, Djokovic pounded his racket repeatedly on the court.

Now it was Medvedev sensing blood and he fist-pumped excitedly to the crowd when he broke serve for 3-2.

Djokovic had spent five and a half hours longer on court than his significantly younger opponent in reaching the final, dropping six sets, including the opener in his previous four matches.

Tennis has been used to the Serbian always finding a way to win, including when he backed up a gruelling semi-final victory over Nadal at the French Open by coming from two sets down to defeat Stefanos Tsitsipas.

But, whether it was tension, fatigue or a combination of both, Djokovic simply could not get his legs moving or find his usual groove, losing the majority of the long rallies and making simple errors on important points.

Djokovic had gone off court after two sets against Tsitsipas in Paris and come back a different player but here Medvedev keep his foot on the throttle to move into a 4-0 lead in the third and looked calm until the finish line was right in front of him.

The crowd cheered wildly and Djokovic become emotional sitting at the change of ends after pulling back to 4-5, but this time he could not find a way.