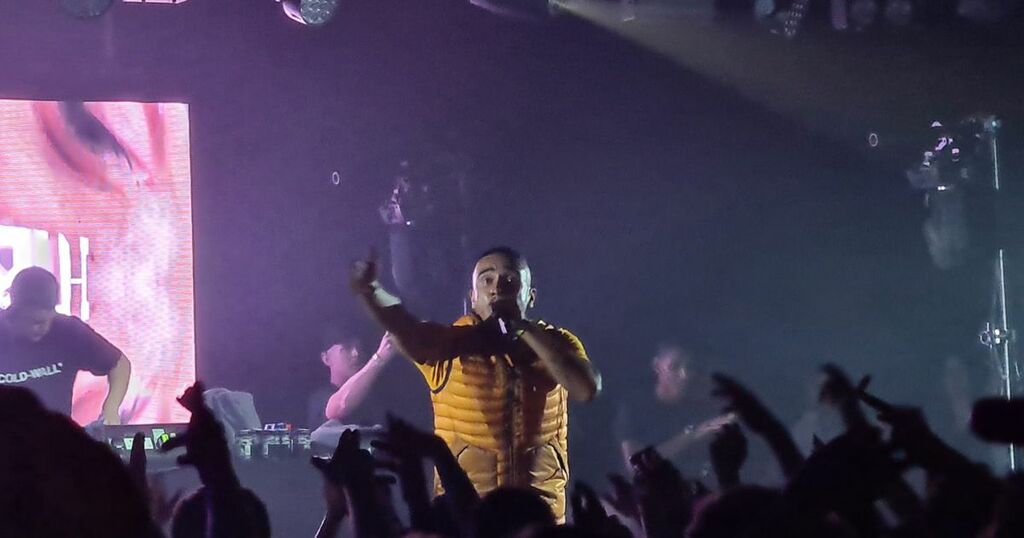 Nottingham rapper Bru-C took to Rock City's main stage last night for the first time and delivered an exhilarating show that was one to remember.

Mosh pits, baseline, and even some acapella performances from the hometown hero meant the show had a bit of everything as Bru-C became the first Nottingham rapper to sell out the famous venue.

Throughout the show last night (September 8), Bru-C represented Notts to the full. Shouting out Long Eaton and the city where he's based on multiple occasions to the crowd's joy.

I even managed to lose a pair of sunglasses while enjoying myself last night. I'm taking that as a sign of a good night.

I stood in the midst of a largely young crowd, barely able to see Bru-C at times with a sea of arms waving in the air in front of me.

On what was one of the hottest days for a while, it was 25C degrees inside the venue when Bru-C took the stage at about 9pm.

By that time many lads in the crowd and decided it was time to go shirtless, and it didn't take Bru-C long to make the same decision.

The stifling atmosphere added to the feeling of being at a summer rave and you almost wanted to keep your hands in the air to let parts of your body breathe.

The show's lighting and pyrotechnics were also impressive and added to the event being seen as a post-lockdown celebration.

Bru-C has been making local headlines in Nottingham since he was arrested in Old Market Square back in July when the nation was caught in World Cup fever.

It was a night to remember for the Nottingham up-and-coming star who told Nottinghamshire Live that he was "speechless" about selling out the venue beforehand.

With support from another local act, Window Kid, there were limbs in the air all night and Bru-C even performed his latest single 'Mesmerised' ahead of its official release.

Some of Bru-C's school friends and family members were also in the house to witness his energy as the MC controlled the crowd to his will.

A big theme of Bru-C's music is positivity and self-belief. He carried that through the show sharing positive messages and echoed that after his performance.

Bru-C said: "After that amazing show I feel like I've accomplished a lot of things I set out to do. It's proof of what the underdog can achieve.

"Looking back on lockdown, I see how it was good for me. I was able to find myself and accepted low points to get to somewhere where I'm able to achieve.

"In crisis there's opportunity and that's what I've always shown."

Back to the show itself, Bru-C performed all his biggest hits barring none for a special and brilliant night at Rock City.

He has stated he plans to return to the venue soon and also has his sights set on a show at Motorpoint Arena one day.

The exhilarating night even saw Bru-C take time out for a meet and greet with fans at the end of the show to cap off an extremely memorable night.

To read all the biggest and best stories first sign up to our newsletter here.