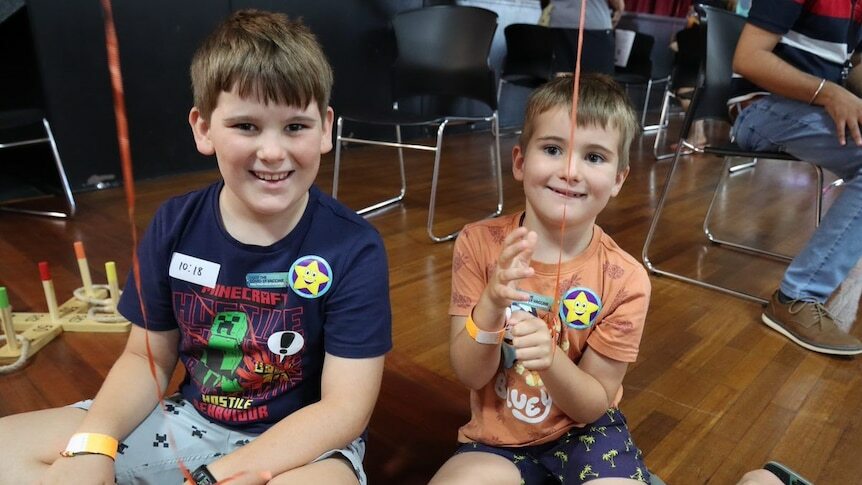 With Northern Territory students set to return to school at the end of the month, Darwin mother Nicole Ryan is keen to ensure her children are vaccinated against COVID-19.

"The vaccine has been proven — it's safe, it's effective," Ms Ryan said.

"I want my kids to be protected … I just think it's the best thing that we can do for them."

Ms Ryan's children — Lincoln, 6, and Max, 9 — were among the first Territory children aged between five and 11 years to receive their initial dose of the COVID-19 vaccine today.

"The vaccine gives me a little army that helps fight the virus," Max said.

It comes after the Therapeutic Goods Administration (TGA) provisionally approved the Pfizer vaccine for the age group last December.

Northern Territory Chief Minister Michael Gunner said the rollout to this age group was "a big step for the Territory and for Australia".

"Vaccinating our kids means we are adding an extra layer of protection to some of our most vulnerable," Mr Gunner said.

"If you're a mum, dad or carer, now is the time to book your little one in."

The Northern Territory government says more than 4,000 children are already booked in to be vaccinated this month.

And while other jurisdictions across Australia are facing major supply issues, NT Health said it was confident there were enough vaccine doses available to inoculate all Territory children aged between five and 11 years.

NT Health's vaccine lead, Bhavini Patel, said the Territory had "around 24,500 children within that age group".

Children aged between five and 11 years will receive a third of the dose that is given to adults and will be eligible for their second shot eight weeks after their first.

"So, instead of being 30 micrograms, it's only 10 [micrograms]," said Professor Robert Booy, an infectious diseases paediatrician at the University of Sydney.

"It's actually very immunogenic in children. They respond very strongly to the vaccine."

Professor Booy said Australian parents who were hesitant could be reassured by the "real-world evidence" emerging globally.

Students in the Northern Territory are due to return to the classroom at the end of January, but the spread of the Omicron variant has seen the return to school delayed by a fortnight in Queensland.

The NT government said that, while it did not foresee the same happening in the Territory, it had not ruled it out, with the issue to be discussed by national cabinet this week.

"With three weeks ahead of us, every student in the Northern Territory will have a chance to get vaccinated before school starts, so we don't need the extra two weeks," Mr Gunner said.

"As we always know with COVID, never say never. Things can change."