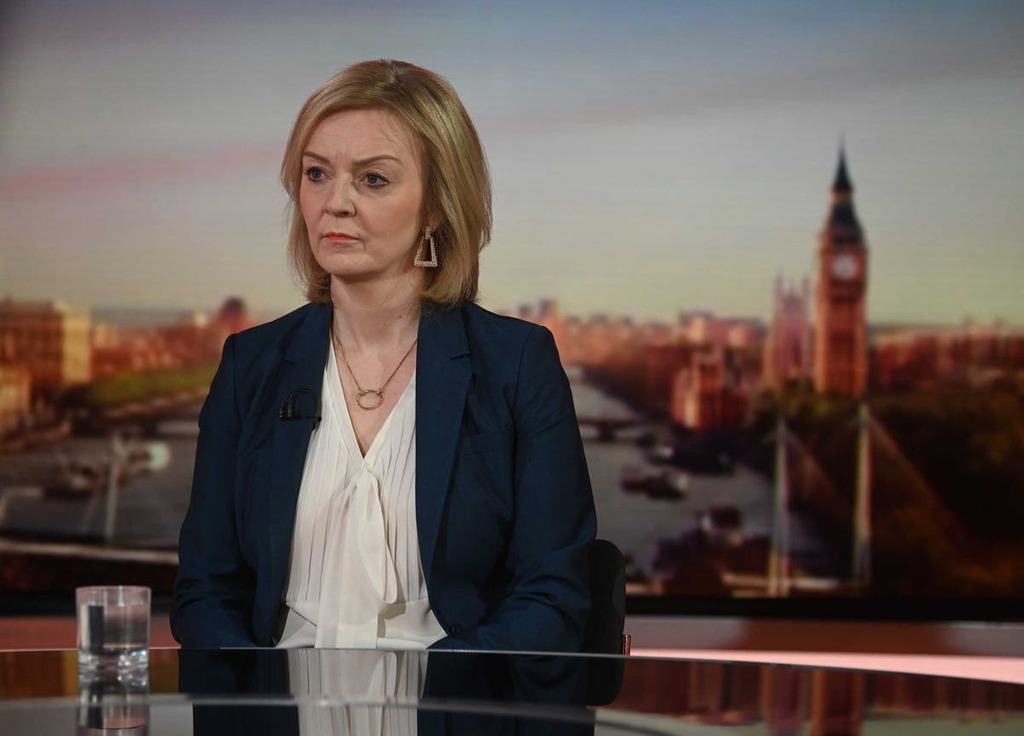 UK and EU to hold crunch talks on Northern Ireland as deal hangs in the balance
Attorney General Suella Braverman is said to have approved the scrapping of swathes of the Northern Ireland Protocol.

‘Renegotiation is not an option,’ European Commission warns

Daily Mirror
One subscription that gives you access to news from hundreds of sites
UK’s threat to Northern Ireland protocol is boost to Putin, say EU insiders

Newcastle Herald
Read news from The Economist, FT, Bloomberg and more, with one subscription
Learn More
Albanese’s First Change As PM Was To Add The Aboriginal Torres Strait Islander Flags To Podium

And why wasn't this done earlier????

Northern Ireland protocol: UK and EU to hold crunch talks as deal hangs in the balance

Foreign Secretary Liz Truss will hold crunch talks with the vice president of the European Commission in the coming hours as ministers consider whether to override parts of the post-Brexit deal on Northern Ireland.

Attorney General Suella Braverman is said to have approved the scrapping of swathes of the agreement, giving Boris Johnson legal cover to make the move, despite warnings from Joe Biden's White House and European leaders not to single-handedly meddle with the terms.

On Wednesday, the Prime Minister said the Good Friday Agreement was more important than the Northern Ireland Protocol as he dismissed suggestions of any possible escalatory response from the European Union as "crazy".

He said there was no need for "drama" as he doubled down on hints he could override elements of the deal.

Ms Truss is expected to tell EC vice president Maros Sefcovic in a call on Thursday morning that the dispute over Northern Ireland cannot drag on.

She had warned she would "not shy away" from taking action as she accused the EU of proposing solutions that would "take us backwards".

According to The Times, Ms Braverman had advised that legislation to override the protocol would be legally sound because of the "disproportionate and unreasonable" way it has been implemented by the EU.

She has submitted evidence accusing the EU of undermining the Good Friday Agreement by creating a trade barrier in the Irish Sea, and warned of "societal unrest" in Northern Ireland, the newspaper said.

There is said to be a rift in the Cabinet over the move, with Ms Truss, Ms Braverman and Brexit opportunities minister Jacob Rees-Mogg reportedly in favour, while Chancellor Rishi Sunak is concerned about the impact on the economy.

There have been suggestions that unilateral action by the UK could spark a trade war against the backdrop of the invasion of Ukraine.

But Mr Johnson told BBC News on Wednesday: "Let's face it, we're talking about really, in the scheme of things, a very, very small part of the whole European economy, and I think 0.4% of the value of the whole of the EU economy in Northern Ireland.

"It is crazy. I didn't think there's any need for drama. This is something that just needs to be fixed."

Speaking to ITV's Peston programme, Mr Rees-Mogg said the UK would not involve itself in any trade war with the EU.

"Tit-for-tat retaliation of that kind is the economics of the school ground and it would damage British consumers at a time of rising (prices)," he said.

Northern Ireland minister Conor Burns said on Wednesday evening that the UK Government would have to take unilateral action over the protocol if it could not resolve issues with the EU.

Speaking to LBC's Tonight With Andrew Marr programme, he said: "If the EU are saying to us that, and they're not, I don't think, yet at the position of saying there's nothing more to talk about, then we will have to take actions to prioritise stability in Northern Ireland, powersharing in Northern Ireland, to protect the institutions of the Good Friday Agreement, and that will mean intervention unilaterally, yes."

German Chancellor Olaf Scholz has said: "No-one should unilaterally cancel, break or in any way attack the settlement."

The White House stressed the need for talks to continue to resolve the issues, with a spokesman saying: "The best path forward is a pragmatic one that requires courage, co-operation and leadership.

"We urge the parties to continue engaging in dialogue to resolve differences and bring negotiations to a successful conclusion."

He told Sky News show The Take With Sophy Ridge: "The protocol is harming Northern Ireland, it's harming our economy, it is undermining political stability here, so I think in those circumstances, and in order to safeguard the Belfast or Good Friday Agreement and political institutions, the UK Government is well within its rights to act in these circumstances."

Cabinet minister Michael Gove insisted on Wednesday that Mr Sefcovic and the Foreign Secretary had a "good relationship", adding: "They will try to make progress tomorrow."

He told BBC Breakfast: "I know that both of them are fully committed to making sure we resolve some very difficult issues that have arisen.

"You would expect a UK Government, when it is thinking about the security of the entire United Kingdom, to say that there is no option that is off the table, and that is absolutely right."

The PA news agency was told that Ms Truss is poised to take further action in coming weeks if negotiations with the EU continue to stall.

But it has been argued that the protocol will not be completely overridden, with measures being considered to ease the issues on the ground in Northern Ireland.

Read more: Sir Jeffrey to stay in Westminster despite winning seat at Assembly

UK and EU to hold crunch talks on Northern Ireland as deal hangs in the balance
Attorney General Suella Braverman is said to have approved the scrapping of swathes of the Northern Ireland Protocol.

‘Renegotiation is not an option,’ European Commission warns

Daily Mirror
One subscription that gives you access to news from hundreds of sites
UK’s threat to Northern Ireland protocol is boost to Putin, say EU insiders