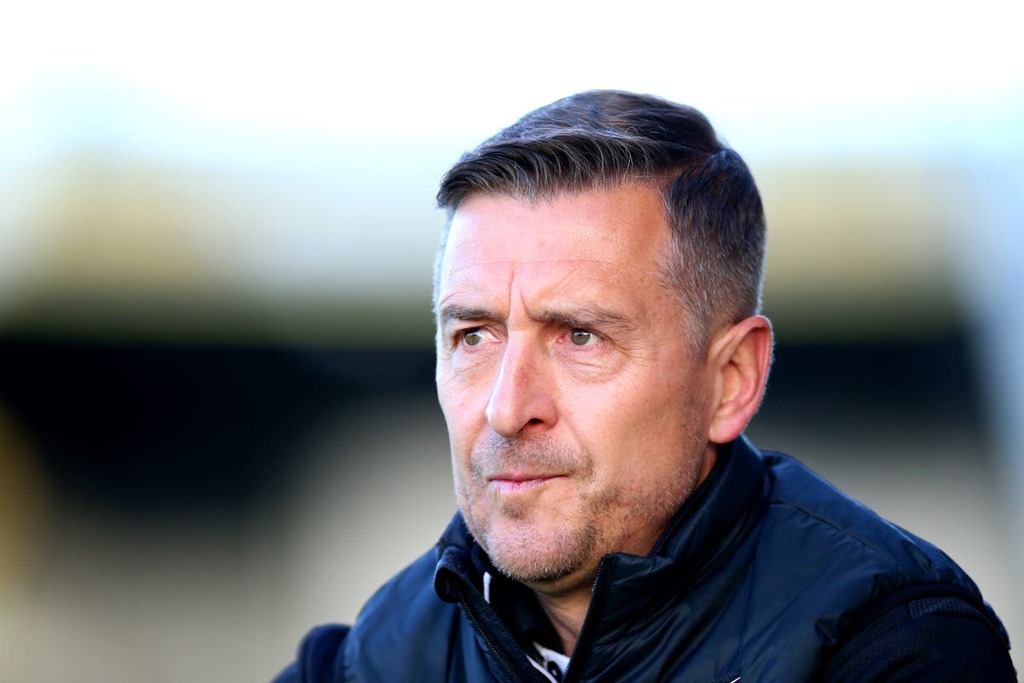 Jon Brady believes momentum is with Northampton as they look to home comforts
Mansfield lead 2-1 from the first leg of their play-off semi-finals.

WHEN Brian Clough was a manager he had a penchant for signing players that he knew well.

Fair dinkum Cobbler Jon Brady was once reeled in as an extra at net practice when England's cricketers were playing a Ashes tour match in his home town.

In truth, Mike Gatting's visiting attaches of bat and ball had made a strong impression. Venerable scribe Martin Johnson had famously concluded: “There are only three things wrong with this England team: They can't bat, they can't bowl and they can't field.”

And when 11-year-old Brady, playing football with his mates on a neighbouring sports ground, peered over the fence to judge for himself, our gallant cricketers lived down to the hype magnificently. Bowled out for 82 and thrashed by eight wickets against New South Wales, they had reverted to type after winning the first Test the previous week.

“I was having a kickabout with my mates on the pitch next door when the England coach, Micky Stewart, was giving a tall bloke with lots of curly blond hair some technical advice,” said the Northampton Town manager. “I think it was (fast bowler) Graham Dilley. We just stayed and watched for a bit, retrieving the ball, did a bit of fetching and carrying.”

For a schoolboy from Newcastle, a surfing resort and the largest coal port on the Pacific, it was cool to get a close look at the Poms. Little did Brady know that, 35 years later, he would be on the brink of becoming the first Aussie manager to win promotion in English football's top four divisions.

The privilege was cruelly snatched from the Cobblers last weekend, when they began the day with a five-goal advantage over Bristol Rovers for the remaining automatic promotion slot from League Two. Racing into a three-goal lead at Barrow, and eventually winning 3-1 at Holker Street, should have sealed the deal. But Rovers' 7-0 thrashing of relegated Scunthorpe's desperately young side sent the Gas through the loft hatch on goals scored.

For Brady, now 47, it was hard to process the gut-wrenching disappointment and swallow the prospect of a play-off semi-final against Mansfield instead of a party. “We addressed the players first thing on Monday morning and I asked them to get anything and everything off their chests – how they felt, any grievances – which they did," he said. “Then I told them, 'There are 7,250 minutes until kick-off at Mansfield – let's not waste a single minute.'

“This group has dealt with so many setbacks over the season, from a 'goal' that didn't cross the line against Forest Green Rovers to a 21-day break because of Covid, but they have never lost their spirit, their fight, their endeavour. We won promotion through the play-offs at Wembley two years ago when the only fans allowed were cardboard cut-outs behind the goal.

“This time our motivation is to go back and celebrate in front of real people. What happened last weekend was cruel, but it's gone – and we're at our best with our backs to the wall. We have a second chance to go up and we can't waste a minute dwelling on the past.”

Brady has never hung around waiting for fortune to set the agenda. He came to England as a 16-year-old, persuading his parents to let him fly 10,500 miles around the world to join Brentford, the first of his 14 clubs as a journeyman winger. Picked in a representative Australian side to provide warm-up opposition for Tottenham and in Denmark, he caught the eye of Bees scouts.

“My parents wanted me to finish the final year of what you would call A levels here,” said Brady. “But Brentford said it was now or never – sign now, or you miss the opportunity. It was quite intimidating to catch a plane here by myself, but my parents were brave enough to let me follow my dreams.

“Now, on the few occasions I go back to Australia, I get ripped to pieces about my accent. What happens over the next few days is not about me personally – it's about restoring Northampton to League One. I'm fully invested in this club, the group of players, the people who work behind the scenes and the fans.

“We fully respect Mansfield and fully expect two close games, but it would be nice to go back to Wembley and see those cardboard cut-outs come to life.”

Jon Brady believes momentum is with Northampton as they look to home comforts
Mansfield lead 2-1 from the first leg of their play-off semi-finals.

WHEN Brian Clough was a manager he had a penchant for signing players that he knew well.