No political gathering, rally in Karnataka till COVID-19 guidelines are in force: HC 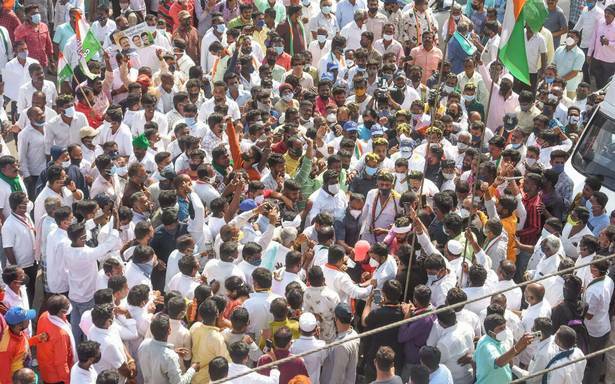 The High Court of Karnataka directed the State Government to ensure that no rally, dharna, demonstration or political gathering is allowed in any district across Karnataka in view of the ban on such events imposed in the guidelines issued on January 4 due to a rise in the number of COVID-19 cases.

The court directed the government to execute the mandate of the guidelines issued on January 4, till they are in operation, for preventing the spread of COVID-19.

A division bench comprising Chief Justice Ritu Raj Awasthi and Justice Suraj Govindaraj issued the directions on January 14 while disposing of PIL petitions, which had questioned political rallies and gatherings, particularly the padayatra by Karnataka Pradesh Congress Committee (KPCC) on the Mekedatu project despite prohibition on holding such events.

Earlier, Additional Advocate General R. Subramanya told the bench that the government had on January 12 issued a separate order banning KPCC’s padayatra and had instructed deputy commissioners and superintendents of police of all districts to ensure that the padayatra is not allowed, and no individual or vehicle is allowed to be used for the padayatra in any part of Karnataka.

The order was issued after the bench on January 12 questioned whether the State Government was ‘helpless and totally incompetent’ to stop the padayatra, which began on January 9 despite the January 4 guidelines prohibiting such an event.

Senior Advocate Uday Holla, appearing for the KPCC, clarified that the padayatra has been temporarily suspended taking note of the observations made by the bench during the hearing on January 12, and the prevailing situation of Covid-19 pandemic. He, however, pointed out that other political parties are carrying out rallies in different parts of Karnataka.

Taking note of the Government Order issued on January 12 and the submission made on behalf of KPCC that it has suspended the padayatra, tiled ‘Namma Neeru Namma Hakku’ (our water, our right), the bench disposed of the petitions.