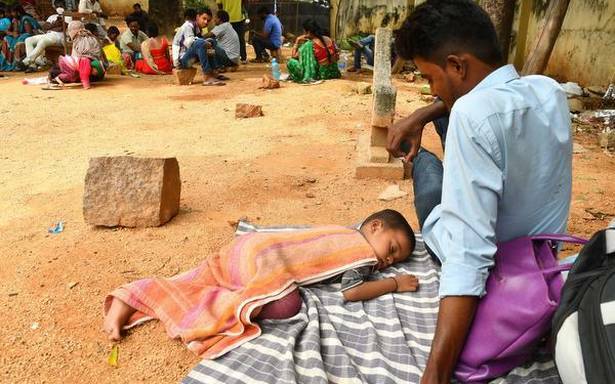 The 1400-bed Niloufer Hospital here is almost 90% full with children suffering from viral fevers, bronchitis, pneumonia, dengue, and other illnesses or diseases getting admitted at the State-run tertiary care facility.

Doctors said every monsoon, the hospital sees almost 100% bed occupancy. They, however, point out that many who do not have severe infections or diseases are also referred to the hospital dedicated for children.

“Children from faraway districts are also referred to our hospital. We admit everyone who comes here even after reaching full capacity. But some private hospitals refer children even if they do not have a serious form of infection. Besides, anxious parents rush their child to hospital when the platelets count drop below 1 lakh, suspecting dengue,” says a paediatrician at the hospital.

Some of the little patients admitted for high fever are discharged in a day or two after their temperature comes down. A senior doctor says, apart from seasonal diseases including dengue, the incidence of bronchitis and pneumonia in children increases during monsoon.

Given the apprehension regarding children being the worst hit in an impending third wave of COVID-19 pandemic, a separate 400-bed facility was recently added to the hospital. “Only one floor of the new facility is used for COVID patients. The remaining three are filled with children suffering from respiratory issues, and almost all the beds are occupied,” adds the senior doctor.

The doctors specialists opine that if private hospitals refer the non-severe patients to a nearby District or Area Hospital, only critical cases can be attended at Niloufer Hospital.

“When someone travels from Nizamabad or other districts to our hospital in Hyderabad with their child, we cannot send them away even though the patient’s condition is not so severe. We admit them and treat them. But if only severe cases are admitted, we can allot more time to each patient,” the senior doctor avers.

As part of the preparations for the possible third wave, paediatric wards were established in some of District and Area Hospitals. In Hyderabad, apart from Niloufer Hospital, paediatricians are posted in District Hospital in King Koti, and a few of the Area Hospitals.