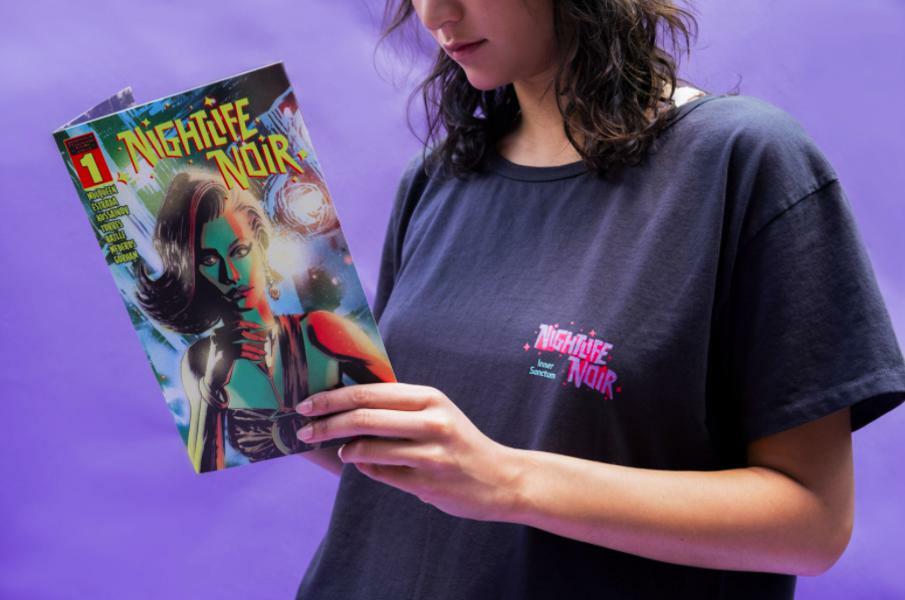 “Nightlife Noir was one of those divine pandemic projects born in the moment of personal reckoning we all experienced in April of 2019 — the ‘What Now?’ moment,” Mulqueen explains. “In many respects, it was also an act of closure for one of my clubs, The Black Lodge, which we shuttered at the height of its popularity. Eagle-eyed observers will notice quite a few visual similarities in the recurring locale of the comics.”

If anyone understand this world well, it’s Mulqueen. After finding out he wasn’t “cut out for a desk job” in 2015, Mulqueen converted a broom closet at the Gansevoort Hotel into a charming little club called Nighty Night. A year later, grander aspirations pushed him to open The Black Lodge, a thumping, subterranean sweatbox set clandestinely in the heart of Nolita. And in 2018, he joined forces with Thatcher Shultz to open Make Believe at the Sixty LES Hotel. It remains one of New York City’s most recognizable and photo-worthy rooftop bars today.

So when COVID-19 forced nightlife blackout, Mulqueen looked to Twitter to seek out his collaborators, including the six artists as well as colorist Alex Battle, designer Manny Mederos, and cover artist Adam Gorham. With his newly formed publishing label Prodigious Digits, Mulqueen launched a successful Kickstarter campaign for Nightlife Noir to fund its production — and plans to release more issues down the line. We sat down with Mulqueen to learn more about the Nightlife Noir comics.

Discuss your creative process — how did you create the characters? Are they based on real people?

I always knew this project was anthology because of the breadth of characters you experience in a night out in New York City. From the cabbies to the coat-check, everyone has a tale.

Four of the stories are about the people who work in nightclubs—the lifeblood of our industry. There is a cautionary tale of a bus-boy who becomes embroiled with sinister forces beyond his comprehension. There is a story about a larger-than-life operator whose ego brings forth her club’s demise. There are two stories about bartenders, but they couldn’t be more distinct: one follows a clubgoer who turns the club into her own personal playground at closing time, and another examines the casual racism and classism ingrained within the patron-bartender relationship at any trendy Manhattan spot.

There are millions and millions of stories unfurling on a nightly basis in this city, I merely became a proxy to communicate them with the authenticity and nuance they require.

From a thematic perspective, why noir?

I find there is an air of intrigue that accompanies you when you step out into the city at night. It’s as if any night we could chase the whim of a new acquaintance, find ourselves in an unmarked bar, fall victim and be swallowed up whole. Every night in New York has the trappings of a noir; it’s just our better judgement that prevents us from becoming Jane Greer.

How did you find your collaborators?

Twitter! It’s an amazing resource for discovering portfolios. I was entirely new to the field, so the length of the stories (eight pages each) made the project palatable. For me, it was very important that each story be given a unique visual identity. Ultimately, my artist-collaborators elevated my scripts beyond my wildest dreams.

For the cover art, I was fortunate enough to have the eminent Adam Gorham lend his skill to the project. Cover art has a distinct impact on the monetary success of a comic book. It must pop on the shelf and demand your curiosity. Adam’s cover and interior work for Marvel and Indie Comics alike speaks for itself, and to have a rising star on the book is a huge win.

I feel like there's been a loss of cultural nuance when talking about parties. Everything is corporate and manufactured. What is missing from coverage of nightlife in mainstream media?

Nightlife is still that “dirty word” that nobody cares to talk about, but I hope on the heels of COVID, I hope people realize how integral we are to the city’s cultural life-force. I find even the biggest-budget films fail to replicate the energy of a nightclub — the only party depicted on the silver screen I’d want to attend would be the Blood Rave from Blade, maybe the one in Gaspar Noe’s Climax.

What is your hope for nightlife post-COVID? What do you say to those who think “NYC is dead”?

New York City is far from dead. She is leaner — she has an indestructible quality about her. My humble request for people in nightlife is: Go forth and create unique offerings. We have the most deserving audience in the world.

Anything else to add?

Your last two questions struck a chord, and I am compelled to double down. New York City is inexorable. Dispel any notion of our demise from your mind, it will never happen. Likewise, I hope that city and state legislation remove some of the archaic, arbitrary red tape that stymies our industry’s growth. Nightlife should be exalted. It is where we forge life-long friendships, make mistakes, fall in love, revel, act foolishly, discover ourselves, discover what it means to be human, what it means to be alive.

Learn more about Nightlife Noir and shop the books here.