There’s a moment early in Prime Video’s new sci-fi series Night Sky that wrecked me. Irene and Franklin York – played by Oscar winners Sissy Spacek and JK Simmons – are sitting at their dining room table quietly talking about fear and death. An ageing couple discussing the end is intrinsically sad, but what’s more staggering is how, after 40 years or so of marriage, the Yorks live for each other. When Irene asks Franklin what he’d do if she died, he answers nakedly: “I’d die, too.”

The Yorks’ friends are passing away, or they live in care homes. Irene took a bad fall and now gets around mostly by wheelchair. In place of a social life, Irene and Franklin keep a secret as extravagant as it is romantic. Under the small shed behind their modest house in their one-traffic-light Illinois town lies a portal to a vast and deserted planet. The couple like to sit on their intergalactic viewing deck and stare out at the alien landscape through a window connecting our world to another. They can see a dry, craggy plain with snow-capped mountains. A cotton candy sky that swirls like the Milky Way bathes the Yorks’ faces in a fuzzy spectral glow, and they talk all evening. Crucially, they have never breached the barrier.

It’s tricky to describe the plot of Night Sky without giving too much away. The list of spoilers Amazon would prefer critics not to mention is a pretty thorough description of everything that happens. The series is distinctly talky for a sci-fi drama, but still traffics in that genre’s tropes. There’s the mysterious arrival of a visitor called Jude (played by Thai-Australian actor Chai Hansen), who threatens to drive a wedge between Irene and Franklin. And there’s a nosy neighbour (Adam Bartley) asking around town about the crotchety couple that takes nocturnal strolls to their shed.

But sci-fi beats are far from what’s most exciting about Night Sky anyway. Franklin and Irene are actively reckoning with how to get older. The paternalism they resent from their granddaughter, Denise (Kiah McKirnan), they routinely inflict on each other. There’s the occasional groaner – Franklin dismisses Denise’s concerns about Jude with an egregious grandpa joke: “What’s he gonna do – steal our Metamucil?” – but overwhelmingly the show considers the trials of ageing carefully and tenderly.

At its worst, though, Night Sky plods when it should race. The intergalactic menace never feels that menacing. For various reasons – age and circumstances among them – most of the central characters feel like they’ve been living in the direction of death for a while. The space vistas are gorgeous, but whole episodes go by without featuring them. The first series from writer Holden Miller, Night Sky’s top-secret plot often feels like it’s crowding out the show’s real pleasure: Spacek and Simmons giving exquisitely measured performances that capture the patience needed to make a long marriage work.

Perhaps the series works most powerfully as a metaphor. In episode one, the Yorks hit an undeniable fork in the road. Irene wants to spend more and more time in the secret chamber, awed by the possibility of the abyss. Franklin is afraid of it. For much of the series, they’re on separate tracks trying to grapple with the unknown. Night Sky isn’t explicitly religious, but the twinned themes of death and new frontiers can hardly avoid a religion-inflected optimism: even towards the end, there is more time. 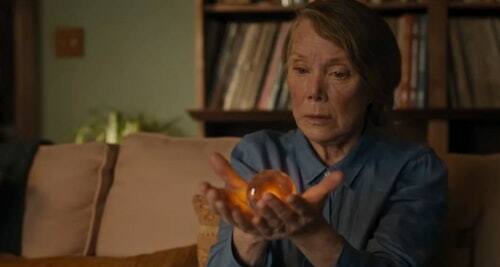 SOME actors could make an advert for toothpaste into compelling viewing. Their mere presence can elevate the most mundane material.

J.K. Simmons and Sissy Spacek star as a small-town Illinois couple with a mysterious portal in the tool shed.