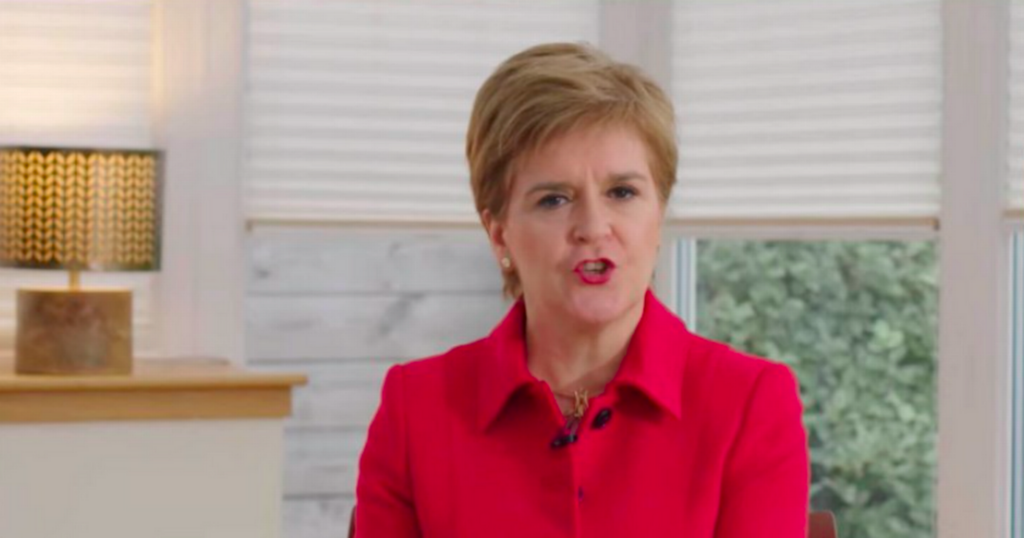 Nicola Sturgeon has admitted there will be “challenges to overcome” if Scotland becomes an independent country.

In her keynote address to the SNP conference, the First Minister said she would lay out her revised case “openly and honestly” and repeated her call for indyref2.

She said: “Nothing will fall into our laps. But, like all countries, we face challenges whatever path we take.”

However, Prime Minister Boris Johnson's official spokesman rejected the First Minister’s call even before she had finished speaking.

SNP Government policy is for a referendum to take place before the end of 2023, covid permitting.

Sturgeon favours a joint agreement with Westminster, as was the case in 2014, but the UK Government is refusing to agree to another vote.

In an online speech that backed her party’s power-sharing deal with the Greens, Sturgeon said leading the country through the covid crisis is the “most important job” she has ever had.

However, she said she was hopeful Scotland could “soon” look ahead with “greater confidence” to “better days ahead”.

On indyref2, she repeated her belief that the SNP Government had secured the right to hold a referendum: “Judged by any standard of democracy, our victory in May represents an unarguable mandate to implement the manifesto we put before the country. And that is what we intend to do.

“It is called democracy.”

In a reference to the difficulties posed for the independence case by Brexit and covid, Sturgeon said work is being done to refresh the case for her flagship policy.

She added: “The Scottish Government is now re-starting work to make sure that the choice about our country’s future is a fully informed one.

“No-one is saying there won’t be challenges to overcome.

“We will set those out openly and honestly.”

“That is the choice we intend to offer the Scottish people in a legal referendum within this term of Parliament - Covid permitting, by the end of 2023.”

She also called for the Tory Government to work with her on a legal referendum.

“I said earlier that my approach to government and to politics will be, as far as possible, co-operation not confrontation," Sturgeon added.

“The experience of the pandemic and the challenges we face as a result reinforces my view that this is the right approach.”

"Our neighbours in north-west Europe are wealthier than the UK. All of them. They are more equal than the UK. They have lower levels of poverty.

"They have higher productivity, which drives better living standards. All of them recovered better from the financial crash of 2008. They have stronger public finances."

However, Sturgeon’s critics in the independence movement believe her approach is naive as they argue Boris Johnson will never agree to indyref2.

If Holyrood introduces its own referendum bill, without an agreement with Westminster, legal observers believe it will end up in the courts.

Her predecessor Alex Salmond, who leads the Alba party, accused Sturgeon over the weekend of presiding over an independence “groundhog day” of rehashed announcements.

Johnson's spokesman dismissed the call for indyref2: “We’ve said this many times before, Ministers and officials across the UK Government departments are focusing on tackling COVID 19 pandemic and supporting the economic recovery.”

“Scottish people have been clear they want to see the UK Government and devolved governments working together to defeat pandemic, that’s our priority.”

“Last week we announced further investment in health and social care across the UK, including £1.1 billion to Scotland by 2025, and we’ll continue to work closely with our Scottish counterparts.”

“As I said, we are very much focused with them on recovering from this pandemic.”

She said: "The loss of more than £1,000 a year will be utterly devastating. It will quite literally take food out of children’s mouths.

"It will drive people into debt and, in some cases, to destitution and despair. And the Tories know all of this."

She also criticised anti-vaxxers who are trying to persuade people not to get the covid vaccine: "To the small but noisy minority who knowingly spread fear and misinformation about vaccines, I say this - stop being selfish and irresponsible.

"Stop putting the health and well-being of the country at risk. It’s time to cease and
desist."

Scottish Labour leader Anas Sarwar said: “We are up against a global pandemic, a growing healthcare crisis, a jobs crisis and a climate emergency – there is no time to waste.

“There were no new ideas for to help Scots, just the same old rhetoric, slogans, and platitudes.

“Scotland deserves so much better than that.”