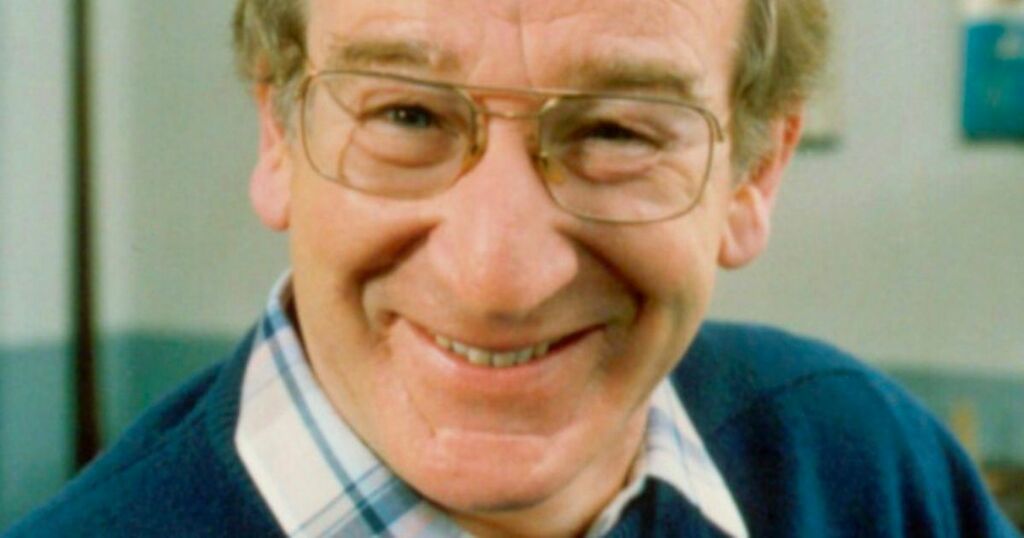 The actor - famed for playing Mr MacKenzie in the children's drama series - was 84.

A statement from his family said: "He was a gracious, kind and lovely man, a wonderful father and grandfather.

"He was also very funny and brilliant at telling stories, acting out all the characters, marvellous company and a privilege to know.
"He loved nothing more than offering hospitality and making people feel welcome."

The news was also shared by a fan account for the BBC1 programme, which tweeted: "It is my very sad duty to inform you that Nicholas Donnelly who played Mr MacKenzie sadly passed away this morning. RIP xxxx"

Fans of the long-running show, which ran from 1978 to 2008, shared their devastation as they paid tribute to Nicholas.

One tweeted: "Very sad news to hear. He was definitely one of my favourite teachers on Grange Hill. Very fair but firm when he needed to be. Nicholas’ Scottish accent was so convincing too. Just proves what a versatile actor he was. My condolences to his family and friends. RIP Nicholas."

Another posted: "Sad to hear this, remember him well, he was in the show from my favourite time, around 87-89. He seemed like the more normal teacher in between Mr Robson being too nice and Mr Bronson's too tough approach. RIP."

Actress Karen Lewis penned: "This is so sad. I worked with him during my time on Grange Hill. He was the most delightful man. A gentleman and a true professional. My thoughts are with his family and friends. RIP Nicholas."

Ricky Simmonds posted: "Nicholas was a true pro and a lovely man to work with. RIP."

During his acting career, Nicholas also starred in TV shows The Bill, Angels and Dixon of Dock Green, as well as a string of movies.

He had made his acting debut in 1958 flick Carry On Sergeant alongide Kenneth Williams and William Hartnell, although he wasn't credited.

Nicholas also had roles in movies A Nightingale Sang in Berkeley Square and Lifeforce.

The star was born in Kensington, London in 1938.

He shared four children with his wife Alrun.

Speaking once about how he became an actor, Nicholas said: "I was a 10-year-old-boy playing in the street with my friends in Notting Hill, when we got spotted by a documentary film company who asked if they could include us in their project. From there I was hooked on becoming an actor.

"After school, I did amateur theatre, rep tours and had a wonderful time acting, rehearsing or reading for plays. Then, in the late 50s , I got called up for The Royal Inniskilling Fusiliers based in Northern Ireland and Germany.

"I started TV in 1961, playing various police officers in Dixon Of Dock Green. I did bits and pieces in the station, answering the telephone and saying, 'It’s for you, sergeant.'

"I didn’t think it was furthering my career, so I asked the producer if I might have a reasonable scene occasionally. Nothing happened until the following year when they offered me PC Johnny Wills."

Speaking about landing his role in Grange Hill, he said according to Express : "I played Mr MacKenzie in Grange Hill from 1985, which was great because, again, it was regular work and they agreed for me to play him with a Scottish accent.

"It was a big teatime show, but after nine years the accountants came in, I had fewer scenes and I left by mutual agreement feeling that I’d had a good run.

"After my agent died, I stopped acting because I relied on him for everything. Since then, I’ve focused on writing plays and a musical, which I hope to stage in the future. That takes up my time now as well as golf and gardening. I met Alrun when I was stationed in Berlin and we’ve been married 56 years; we have two sons, two daughters and five grandchildren."

He added: "I still get recognised from Dixon and Grange Hill and I always receive a hello and a nice smile. Dixon Of Dock Green was such a big part of my life that whenever anyone asked my children what their dad did, they always replied, 'He’s a policeman!"

Donnelly met his wife Alrun during his National Service in Germany in the late 1950s, and the couple were married for more than 60 years.


They had two sons, twin daughters and five grandchildren.


The actor, who was a Queens Park Rangers fan, grew up in Kensington, and his other TV credits included appearances in The Saint, which starred Roger Moore.


His acting credits extended to the big screen where he starred in films like 1982 horror film Venom and comedy film Carry On Sergeant.
In 1993 he retired to Hastings with his wife, where he was a lay minister at his Catholic Church, St Mary Star of the Sea.