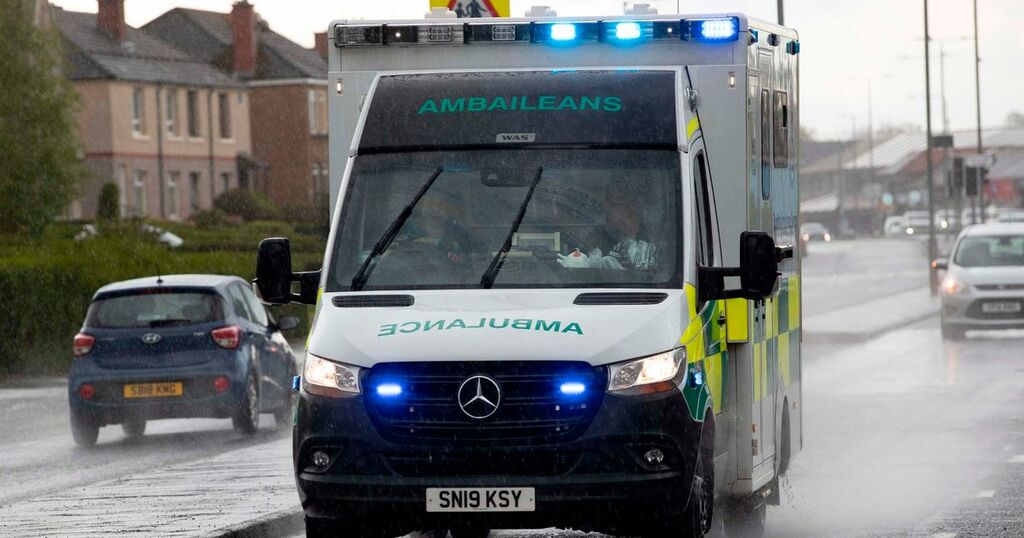 A cancer patient was rushed to hospital in agony after being told to sip water and call her doctor in the morning by NHS24.

Theresa Toward ended up having emergency treatment for a serious condition after a call-handler failed to let her see a doctor.

The 56-year-old was in so much pain her husband Patrick called an ambulance after the call and paramedics were advised by a medic to rush her to Paisley's Royal Alexandra Hospital, the Lennox Herald reports.

The frightening drama unfolded when Theresa - who had surgery for colon cancer two hears ago - suffered crippling stomach pains shortly before Christmas at her home in Dumbarton.

She explained: "I had quite a big incisional hernia, and I went to the surgeon who examined it and said it felt quite lumpy.

"He told me I had multiple holes in my abdomen from the surgery.

"I went to him on December 21 to see how the hernia was going as it was causing me a lot of bother and pain.

"He had a look and told me not to worry about it, and that I could come back and see him in six months.

"That night however I started to get excruciating pains in my stomach that wouldn't go away."

Theresa felt she needed to be seen by a doctor and phoned NHS24 - as per the current advice.

However she was left shocked when a call-handler advised her to phone back the following morning.

She continued: "I phoned up NHS24 and the woman kept me on the phone for about 25 minutes, questioning me.

"I told her about the cancer, the hernia, the surgery. I was in agony and constantly vomiting.

"At the end of that she said to me that they wouldn't give me an appointment as they didn't need to see me.

"I was told to take sips of water and should contact my own doctor in the morning.

"I've never had pain like it in my life and it felt like I had just been fobbed off. Especially when I have a history of cancer, hernias and lots of gastrointestinal issues."

Theresa's husband, Patrick, phoned an ambulance after the call - whilst an out-of-hours doctor called the couple and advised paramedics to rush her to Paisley's Royal Alexandra Hospital.

Theresa continued: "I was given a scan and the hernia that was the incisional one had strangulated and caused a bowel obstruction. I was seriously unwell.

"They had to put in a nasogastric tube for a few days to see if that could resolve it.

"Toxins were being released into my body because the bowel was damaged. The doctor said they might've needed to send me for emergency surgery to cut the bowel and join it again.

"I'm just lucky that the tonnes of antibiotics and the disgusting experience of having the nasogastric tube in for days helped.

"If I had waited until the next day then the outcome probably wouldn't have been so good."

And Theresa, who was released on Christmas Eve and is now recovering at home, admits the experience put her off calling NHS24 before an ambulance.

She said: "I would never phone NHS24 again. I would just phone an ambulance. I'd never in my life phoned an ambulance, and I wouldn't have phoned one if I hadn't had pain like that.

"I think it's disgusting, with the history I've got which is obviously quite bad, to be told that they don't need to see me.

"It was a waste of time. I could've had an ambulance a lot sooner if I hadn't gone through the proper channel."

Dumbarton MSP Jackie Baillie said: "Theresa's experience must have been really frightening for her and I am glad that she is now home and on the mend.

"It is disappointing to hear about the handling of her case by NHS24 as, if her husband had not called an ambulance, she might have been in very serious trouble. If she wishes to make a formal complaint, I am happy to help her with that.

"I know that NHS24 is currently overwhelmed and NHS Greater Glasgow and Clyde is telling people not to come to A&E. But that is not in the least bit helpful given that constituents have told me of the hours they have had to wait to get a call answered.

"The Scottish Government has simply not planned or resourced the NHS properly to cope with all the winter and covid pressures and they must do so urgently."

Dr Laura Ryan, medical director at NHS 24, said: "We are very sorry to hear Ms Toward has been unwell and wish her a speedy recovery. Feedback about our services and the care we provide to patients is very important to NHS24.

"We would welcome contact from Ms Toward to explore the matter further and identify any learning and improvements that could be made as a result. To progress we would invite Ms Toward to contact our Patient Experience team at patient.experience@nhs24.scot.nhs.uk."