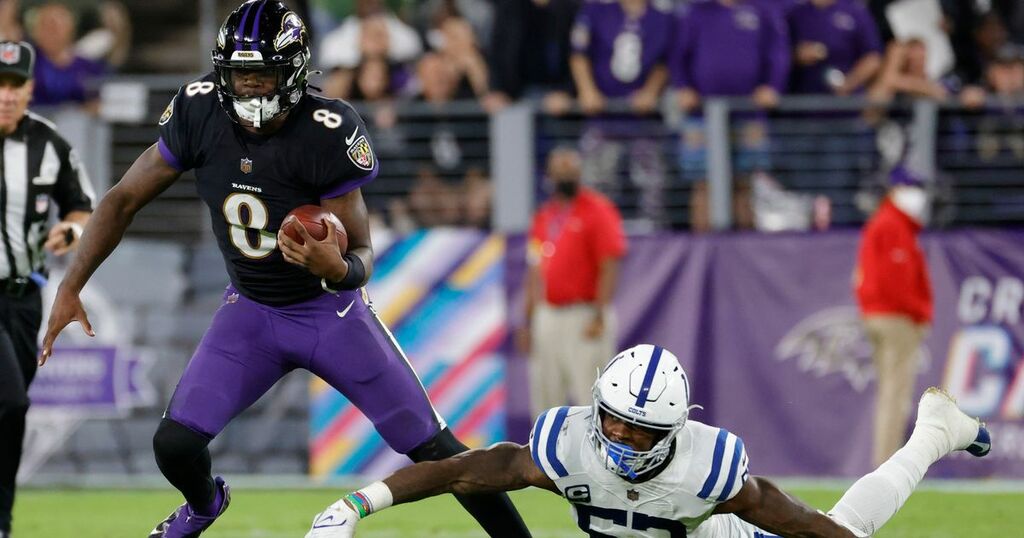 We’re a third of the way into the 2021 NFL campaign - and the drama continues to resemble the heart-stopping and pulsating action of a season finale. What happened this week? Josh Allen and Lamar Jackson strengthened their respective MVP cases, Patrick Mahomes and the Chiefs’ struggles continued, and there was an early contender for match of the year. Oh, and there was arguably the craziest kicking sequence in NFL history.

There was a reason the NFL scheduled the Buffalo Bills’ trip to Arrowhead to face the Kansas City Chiefs on Sunday Night Football. With the Chiefs defence struggling, it looked like this could be the night when the Bills claim a big scalp and finally announce themselves as genuine Super Bowl contenders.

Their announcement - a crushing 38-20 victory - was loud, emphatic and could prove to be significant. The Bills have clearly overcome their week one loss to the Pittsburgh Steelers, which looks like a mere hiccup with every week. Like Lamar Jackson and the Baltimore Ravens recently, Josh Allen led his Bills to their first win over the Chiefs in the Patrick Mahomes era.

Allen lost to Mahomes twice last season, including a crushing defeat in the AFC Championship Game, but the 25-year-old quarterback finally overcame the 2018 MVP to the tune of 315 passing yards and three touchdowns with no interceptions. Allen was genuinely almost perfect on prime time, putting up video game numbers in the rain and on the road. For all the talk of the Chiefs offence coming into this match, the Bills are the highest-scoring offence in the NFL - 172 points, or 34.4 per game.

Halloween is just around the corner, but the scariest part about the Bills offence? They’ve outscored their opponents by 108 points; nine of the NFL’s 32 teams have yet to score 100 points in 2021.

Sticking to the blueprint of the modern quarterback, Allen rushed for 59 yards and a touchdown, averaging 5.4 yards per carry, but his biggest highlight came in the fourth quarter when the 6’4” quarterback incredibly hurdled Chiefs corner L’Jarius Sneed to earn a first down. Allen clearly saw his receivers were enjoying themselves against Sneed, and simply wanted in on the action.

It is unfair to single Sneed out when really the entire Chiefs defence is not up to scratch. It’s a telling sign that even the electrifying Kansas City offence cannot bail out their defensive teammates. Buffalo were able to move the sticks at will, and they made several huge gains including a 53-yard touchdown from tight end Dawson Knox. Chiefs safety Tyrann Mathieu was visibly frustrated watching Daniel Sorensen get consistently beaten and often struggle to stay in the same post code as the receiver.

Ultimately, the difference between the Bills and the Chiefs right now lies in their defences. While Kansas City have the dishonour of being the worst defensive team in the NFL after conceding 163 points through five games, the Bills are at the other end of the standings - their opponents have scored 64 points, just 12.8 per game.

Before Super Bowl LV against the Buccaneers, the Chiefs hadn’t lost by more than a touchdown with Mahomes as their starting quarterback. For the first time since he became the starter, the Chiefs lost a regular-season game by more than a touchdown. Entering Sunday night, Mahomes was undefeated when facing the best defense in the NFL - and the Bills ensured that is no longer the case.

Micah Hyde and rookie Gregory Rousseau came up with clutch interceptions, while the defence tallied 11 pressures and two sacks without blitzing a single down. Buffalo head coach Sean McDermott nailed it, ruining Mahomes’ reads by dropping as many bodies as they could afford into coverage. It worked perfectly - Mahomes averaged 5.0 yards per attempt, the lowest of his career. Suddenly, the Chiefs feel alarmingly vincible.

The Bills feel like the NFL’s latest fad, while the Chiefs feel so last year. Mahomes and his team could get the chance to make amends against Allen and co. later this season - but the match will be in Buffalo on current form (and the fact that the Bills have the second-easiest remaining strength of schedules judging from opponent win percentage).

It’s impossible to anoint Buffalo as the new kings of the AFC until they emerge from the playoffs on top, but the sentiment does not feel as foolish as it did a month ago.

The 2021 season has already seen the art of kicking reach a new high when Ravens star Justin Tucker nailed an NFL-record 66-yard field goal to defeat the Lions back in week three. Barely 14 days passed before we saw a new low.

The climax to the Green Bay Packers’ game against the Cleveland Browns became a kickers’ worst nightmare. At the Paul Brown Stadium on Sunday, 64,195 fans watched in equal parts amazement and horror as Packers kicker Mason Crosby and Bengals opposite number Evan McPherson combined to miss five go-ahead or game-winning field goals in the final 2:12 minutes of the fourth quarter as well as overtime.

According to ESPN, it was the first match in NFL history where five consecutive potential go-ahead field goals were missed in the fourth quarter or overtime.

The game was tied at 22 apiece when the carnage began. Crosby, Green Bay’s kicker since 2007, entered the game having made 24 field goals in a row - a franchise record. He subsequently missed a go-ahead field goal - 36 yards out - with two minutes left, a would-be game-winner as the clock hit zeros, and another potential game-winner in OT. His third miss signalled just the second time since 1970 that four potential go-ahead kicks were missed in the fourth quarter or overtime.

Rookie kicker McPherson had found form to kickstart his NFL career with two successful winning field goals in his first four NFL games. He had two opportunities to add to that impressive start on Sunday, and he twice came up short - or rather, left of the posts. To add insult to injury, McPherson actually celebrated the second kick as he thought it had gone in.

If the kickers stole the headlines, the receivers on display stole the show. Of the Packers’ 466 offensive yards, Davante Adams hauled in 206 with 11 catches from 16 targets while averaging 18.7 yards per reception. He scored a touchdown too, helping quarterback Aaron Rodgers surpass Philip Rivers for the fifth-most touchdowns in NFL history with 422.

While the Adams-Rodgers connection may be the most potent in the NFL, Joe Burrow and Ja’Marr Chase’s relationship is quickly putting the league on notice. Burrow launched a sensational 70-yard pass that Chase pulled in and scored to put the Bengals within two points at halftime. Chase continued to dominate the opposition thanks to his speed, size and impressive hands. Chase finished with 159 yards and a TD on six catches, and no other Bengals receiving target had more than 32 yards. The 21-year-old is the fifth rookie in NFL history with at least 50 receiving yards in each of his first five career games, and he is the third rookie since 1990 with at least five touchdown receptions in his team’s first five games of a season. His company? Randy Moss and Calvin Johnson. Not bad at all.

Chargers and Browns put on offensive masterclass in Los Angeles

When the Cleveland Browns travelled to Los Angeles to face the Chargers, excitement was building. These are two playoff-calibre teams experiencing fine starts to their respective seasons, and a good match was expected. I don’t think anyone expected an early candidate for game of the year.

The Chargers came out on top in a match where 89 points were scored, finishing 47-42 in favour of the home side. The fourth quarter was frankly ridiculous, with both teams combined to score 41 points in a match where fans of defensive football would develop crippling anxiety.

It felt like a classic world heavyweight bout akin to Tyson Fury ’s victory over Deontay Wilder last Saturday. The Browns sent the Chargers to the canvas in the early rounds, opening up a 14-point lead before LA came back. Justin Herbert landed several decisive strikes of his own to take a 28-27 lead, while Cleveland responded with body blows in the form of their effective ground game led by Nick Chubb and Kareem Hunt.

Los Angeles and Cleveland combined to produce 1,025 yards of offence, 52 first downs, 12 touchdowns and just one turnover. It was an offensive smorgasbord, and each of the 70,240 fans in attendance left well nourished. This was largely down to Chargers rookie head coach Brandon Staley’s insane appetite for fourth down conversions. LA quarterback Justin Herbert was immense once again, but it was Staley who won the Chargers the game.

The Chargers scored 47 points against the Browns because Staley went for touchdowns on every possession. It was insane to watch: no field goals, no punts. On fourth-and-two at their own 24, the Chargers went for it instead of punting. Last year, there were only two examples of a team going for it on fourth down from inside their own 25-yard line when not losing late. On fourth-and-7 and fourth-and-8 in field goal range, the Chargers went for it. Again, this is not supposed to happen: nobody went for it from inside the opposing 25-yard line on fourth-and-7 or more unless they were losing by more than a touchdown or running a two-minute drill last season. The Chargers did it twice against the Browns, and converted on each occasion.

Sophomore signal-caller Herbert deserves credit in fairness. The 2020 Offensive Rookie of the Year threw for 398 yards and four touchdowns in the win, and made every throw asked of him. It was his 11th game of his career with over 300 passing yards, the most by any player in his first two seasons in the Super Bowl era - beating out Mahomes and the legendary Dan Marino. He is a stunning player quickly getting labelled as, dare I say, a generational star. Paired with running back Austin Ekeler - who scored three touchdowns - and the Chargers offence is a fierce opponent.

A quick word on Baltimore Ravens quarterback Lamar Jackson: he threw for 442 yards during his team’s overtime win over the Indianapolis Colts. The Ravens had a 4% win probability when the Colts took a 22-3 lead with 3:11 left in the third quarter, but Jackson is proving to be a different beast. He registered an insane 504 yards of total offence as the Ravens scored 22 unanswered points. Not bad for a quarterback consistently likened to a running back.