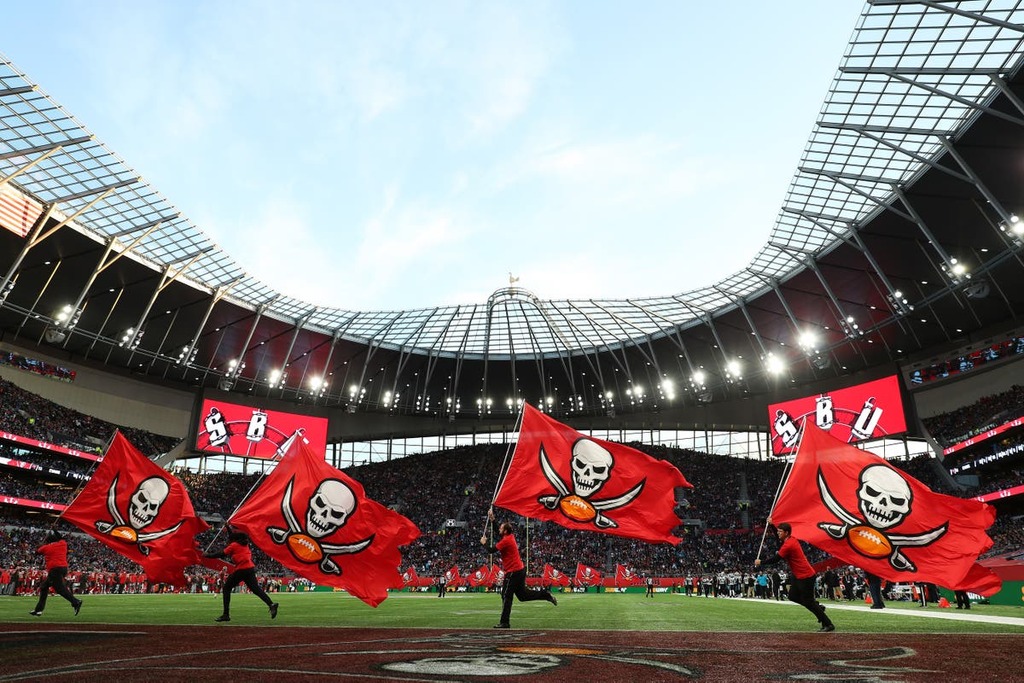 The NFL season has begun with the Super Bowl champion Tampa Bay Buccaneers outlasting the Dallas Cowboys on Thursday night in a thrilling opener. That is exciting enough but it also means the return of top-class American football to London is just around the corner. Two games will take place at the Tottenham Hotspur Stadium after a year’s hiatus because of the pandemic.

Actually, “top class” is stretching the truth a bit. None of the four teams involved made the playoffs and three of last season’s four worst teams will visit Tottenham High Road in October. The Atlanta Falcons, New York Jets and Jacksonville Jaguars managed a paltry seven wins between them. The Miami Dolphins were a little unlucky to miss out on post-season action with a 10-6 record but they are still some way off the NFL’s elite teams.

The first London game on 10 October pits the Jets against the Falcons, the nominal home side. It has been a decade since New York reached the playoffs and one of the sport’s worst underachieving franchises slumped to 2-14 in 2020. That was the cue for a clearout, a regular feature of life for the Jets.

Robert Saleh replaced Adam Gase as head coach and the quarterback Sam Darnold, the third pick in the 2018 draft, was shipped out to the Carolina Panthers – against whom the Jets open the season on Sunday. With the second pick in April’s draft New York chose Zach Wilson from Brigham Young University to replace Darnold. There was some scepticism about Wilson across the league – he comes from a school with a soft schedule and suffered injury problems in college. The media scrutiny in the Big Apple is fierce, too, and extra pressure is heaped on any playcaller in the quarterback’s graveyard that the Jets have become.

Wilson has talent but is raw. The coaches have kept the offense simple for him during a pre-season where he showed positive signs but he will need a better receiver corps to truly shine. No one inside the club is expecting the new quarterback to turn them into contenders overnight.

The same can be said about Saleh. The former San Francisco 49ers defensive coordinator has a fine reputation and has built an impressive staff. The previous regime promised to outthink their rivals. Saleh is more interested in outmuscling them. The 42-year-old has charisma and is demanding a more physical approach. This first season is a free pass for Saleh and there will be a positive feeling in New York if the team wins five or six games.

They will expect one of those victories to be in London. The Falcons underwent even more turmoil than the Jets last season. They lost six games from winning position, including two gruesome fourth-quarter collapses in back-to-back weeks in September where they blew leads of more than 15 points. The head coach Dan Quinn was sacked after a 0-5 start and Raheem Morris saw them through for the rest of the campaign.

Arthur Smith, a former offensive coordinator for the Tennessee Titans, took the helm in January and his priority is to rebuild a defense that could not cope with the passing game. Atlanta addressed some of the problems in free agency and should be much better.

There were a number of quarterbacks with the potential to anchor a franchise for the foreseeable future still on the table when the Falcons’ fourth-round draft pick came around but they chose Kyle Pitts, a tight end. That meant they stuck with Matt Ryan, the 36-year-old playcaller who led the team to the Super Bowl four years ago (when Atlanta’s most celebrated collapse occurred, losing 34-28 to the New England Patriots after leading 28-3). Ryan was one of the Falcons’ better performers last season and the veteran might suit Smith’s offense, which relies on a lot of play-action passes.

The margins were tight for Atlanta in 2020: they lost eight of nine games that were decided by seven points or less. If they can turn that around, a winning season could be on the cards but reaching the playoffs from a division with Tampa Bay and the New Orleans Saints may be beyond them. Smith would be appalled if they failed to overcome the Jets in north London. A good start at home to the Philadelphia Eagles on Sunday is essential for Atlanta.

Jacksonville, the team who would be London’s, are the home side against Miami on 17 October. The Jags are owned by Shad Khan, whose sports portfolio includes Fulham, and the Pakistan-born billionaire has long dreamt of relocating from one of the NFL’s smaller markets to England’s capital. Jacksonville have been playing games in the UK for eight years and they were earmarked to conduct two home games last season before coronavirus intervened.

Why would London want a team that has had a winning record in only eight years of their 26-season history? Despite their struggles, the Jags were just one quarter away from the Super Bowl four years ago. And with their top pick in the draft this year, they took Trevor Lawrence, the Clemson quarterback who many believe will be the sport’s next superstar. Jacksonville have upgraded in a number of positions and while Lawrence cannot work miracles, he seems a safe bet. The riskier move for Khan was engaging Urban Meyer as head coach.

The 57-year-old has a chequered past. He won three college national titles, twice with the University of Florida and once with Ohio State, but there were problems with discipline at both programmes. He had been retired for two years when he answered Jacksonville’s call and Meyer has already made some bizarre decisions and caused murmuring in the locker room about his behaviour.

Very few college coaches make an easy transition to the NFL. The rah-rah approach that works with students does not play well with seasoned, cynical pros. Some of Meyer’s early antics have caused consternation.

In May he signed Tim Tebow, a former quarterback who had been out of the league for six years, as a tight end. Tebow was released at the first round of roster cuts after some embarrassingly poor performances. Meyer also let slip that the Jags were taking Covid vaccinations into account when considering which players to release. Doing this is one thing – a number of teams have a similar policy – but admitting it in public is quite another. The NFL Players’ Association immediately launched an investigation.

Jacksonville start the season at the Houston Texans on Sunday. The Texans are in a mess and the Jags should equal last season’s win total in their first game. If they do not, then chaos looms. Lawrence’s long-term future looks assured and he could well be the quarterback who leads the Jaguars into a more formal relationship with London but, if that ever happens, it is likely Meyer will be long gone.

The Dolphins cannot afford to drop games to teams like Jacksonville. The next step for Miami is the playoffs but they are unlikely to win a competitive division. The Buffalo Bills and New England Patriots inhabit the AFC East so a wild card seems the only route to post-season action. There have been signs of progression in head coach Brian Flores’s first two years but the team has little margin for error in a competitive conference.

This is another team with a young quarterback but the Dolphins are a year further along the line than the Jags. Miami took Tua Tagovailoa with the fifth pick of the 2020 draft and despite an up-and-down introduction to life in the NFL in his first season, Flores has committed to the 23-year-old.

The team changed the offensive structure to suit Tagovailoa, even taking the unusual step of appointing joint co-offensive coordinators, which is similar to the situation the quarterback experienced in college. They also engaged a positional coach whose relationship with Tagovailoa stretches back to high school. In this year’s draft they selected Jaylen Waddle in the first round, a wide receiver who was a teammate of the quarterback at Alabama.

In simple terms, if Tagovailoa is a success, Miami will take a step forward. If he fails, the Dolphins will backslide and risk being overtaken by teams like Jacksonville. Miami travel to New England on Sunday. Their performance there will give a hint as to what sort of shape they will be in when they arrive at the Tottenham Hotspur Stadium.

None of the teams visiting the UK next month are likely to be anywhere near the Super Bowl in February but the sub-plots make both London games essential viewing. All four franchises are entering a new era and the NFL has a habit of producing surprises.