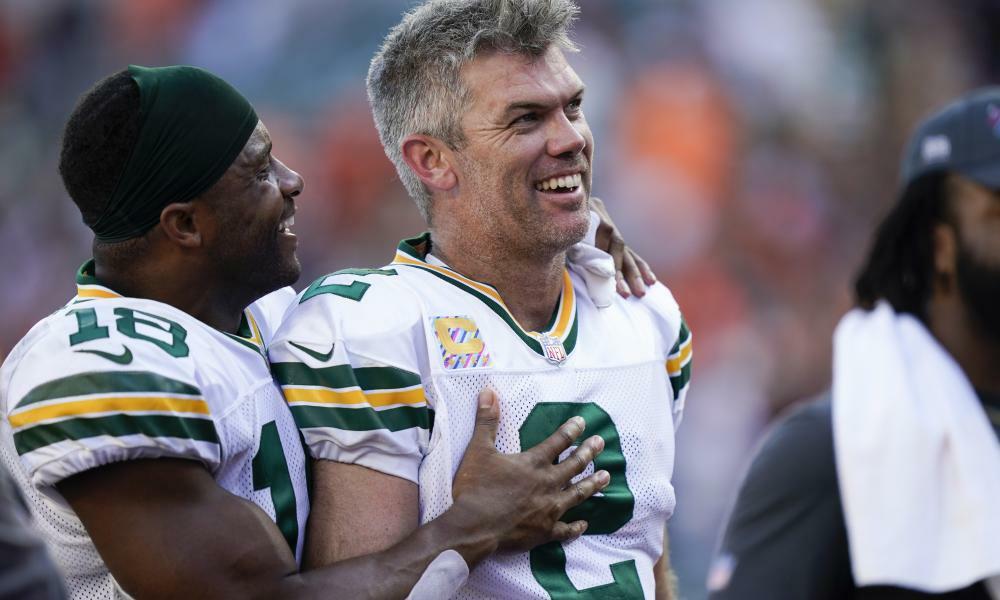 Mason Crosby kicked a 49-yard field goal with 1:55 left in overtime to give the Green Bay Packers a 25-22 win over the Cincinnati Bengals on Sunday.

Crosby atoned for missing three field goals in the final 2:12 of regulation and overtime, including a 51-yarder at the end of regulation and a 40-yarder that would have won the game with 8:08 left in overtime.

After that miss, Cincinnati drove the field and had a chance to win the game, but Evan McPherson missed a 49-yard field goal. Green Bay then took the ball to the Bengals’ 31-yard line to set up Crosby’s game-winner.

Austin Ekeler scored three touchdowns, including a 3-yard score with 1:31 remaining, as the Los Angeles Chargers defeated the Cleveland Browns 47-42 in a wild shootout.

Justin Herbert had his record 11th 300-yard game with 398 yards passing and tied a career-high with four touchdowns. Mike Williams had 165 receiving yards and caught two TD passes for the Chargers, off to their first 4-1 start since 2014. The game saw one tie and eight lead changes, including four lead changes in the final 15 minutes when the teams combined for 41 points.

The Arizona Cardinals improved to 5-0 for the first time since 1974, riding a stellar defensive performance to a 17-10 win over the San Francisco 49ers.

DeAndre Hopkins hauled in a difficult nine-yard touchdown catch with 5:13 remaining, hanging onto the football despite tight defense from San Francisco’s Josh Norman. That gave the Cardinals a 17-7 lead, enough of a cushion to close out the win.
Kyler Murray completed 22 of 31 passes for 239 yards. Hopkins caught six passes for 87 yards.

Dak Prescott threw for three touchdowns the day before the one-year anniversary of his severe ankle injury in the same stadium against the same opponent, and the Dallas Cowboys beat the New York Giants. he already injury-plagued Giants lost running back Saquon Barkley to an apparent ankle sprain in the first quarter and quarterback Daniel Jones to a concussion in the second quarter.

Tom Brady passed for 411 yards and matched his season high of five touchdowns to lead the Tampa Bay Buccaneers to a 45-17 victory over the visiting Miami Dolphins.

Antonio Brown caught seven passes for 124 yards and two scores and Mike Evans had six receptions for 113 yards and two touchdowns for Tampa Bay. The 44-year-old Brady completed 30 of 41 passes while having 400 yards and five scoring passes in the same game for the first time in his 22-year career.

Justin Fields threw his first career touchdown pass, and the Chicago Bears’ defense largely shut down the Las Vegas Raiders’ high-powered offense. Las Vegas struggled on offense in Jon Gruden’s first game since the revelation of the veteran Raiders coach’s racist comment about players’ union leader DeMaurice Smith in an email in 2011. The NFL is looking into the matter, and Gruden could face league discipline for comments made back when he was employed by ESPN.

Nick Folk drilled a 21-yard field goal with 17 seconds remaining and the New England Patriots rallied for victory over the Houston Texans at NRG Stadium.

Folk, who missed a PAT following the first Patriots touchdown, finished 4-of-4 on field goals, including a pair of 52-yarders. The Patriots (2-3) rallied from a 13-point deficit early in the third quarter behind rookie quarterback Mac Jones. Texans rookie quarterback Davis Mills passed for 312 yards and three touchdowns, including a 37-yarder to Chris Conley on a flea-flicker.

Derrick Henry ran for 130 yards and three touchdowns, Kevin Byard returned a fumble for a score and the Tennessee Titans beat Jacksonville, sending the Jaguars to their 20th consecutive loss.

Henry padded his NFL rushing lead as the Titans (3-2) rebounded from an overtime stunner at the New York Jets and avoided consecutive losses to winless teams. Jacksonville (0-5) moved into sole position of the second-longest skid in NFL history, six shy of tying the record Tampa Bay set in 1977.

Ben Roethlisberger passed for 253 yards and two touchdowns, Najee Harris rushed for 122 yards and a score and the host Pittsburgh Steelers beat the Denver Broncos.

Chase Claypool had five catches for 130 yards and a touchdown and Diontae Johnson had 72 yards receiving and a TD for the Steelers (2-3). Harris rushed 23 times and Roethlisberger completed 15 of 25 passes. Teddy Bridgewater was 24-of-38 passing for 288 yards and two touchdowns and Courtland Sutton had seven receptions for 120 yards and a score for Denver (3-2).

Jameis Winston connected on a Hail Mary for one of his four touchdown passes to help the New Orleans Saints beat Washington, a bounce-back victory that came at a cost with two more injuries. Winston completed a 72-yard touchdown pass to Deonte Harris, who departed with a hamstring injury.

Winston took every snap at quarterback for the first time this season, a necessity after Taysom Hill suffered a concussion while trying to catch a pass in the second quarter.

Jalen Hurts ran for a six-yard touchdown and threw a two-point conversion pass with 2:38 remaining as the Philadelphia Eagles took the lead for the first time in a 21-18 road victory against the Carolina Panthers.

A pair of pass plays from Kirk Cousins to Adam Thielen totaling 40 yards set up the winning kick. Detroit had gone ahead with 37 seconds remaining on D’Andre Swift’s scoring run and a two-point conversion pass. Minnesota (2-3) defeated Detroit (0-5) for the eighth consecutive time.