After leading Chiefs to Super Bowl win, the future belongs to Mahomes

The Kansas City Chiefs ended a 50-year Super Bowl drought with a dramatic 31-20 comeback win over the San Francisco 49ers on Sunday in a breathtaking finish to the NFL's 100th season that may have also revealed a new star to kickoff the next century.

The 24-year-old's performance underscored why he is being called the heir apparent to six-time Super Bowl champion and future Hall of Famer Tom Brady of the Patriots.

With the Chiefs trailing 20-10, Mahomes engineered three scoring drives in just over five minutes, hitting Travis Kelce and Damien Williams with short touchdown passes to give Kansas City the lead.

Williams then raced 38 yards for the clinching score, sparking wild celebration for long-suffering Chiefs fans who had not seen their team hoist the Lombardi trophy since their victory over the Minnesota Vikings in Super Bowl IV.

If Chiefs supporters were over-the-moon about the long overdue Super Bowl win at Hard Rock Stadium they will be doubly excited about what the future might hold with Mahomes calling plays for years to come.

With an aging cast of quarterbacking greats marching towards retirement the NFL is searching for the new face of the league and after Sunday's display Mahomes looks to be the man.

Mahomes, who completed 26 of 42 attempts for 286 yards and threw two touchdown passes, appeared out of sorts for nearly three quarters of the game but took charge when it mattered to earn the Super Bowl Most Valuable Player (MVP) honours.

He becomes the second-youngest quarterback to win a Super Bowl and the youngest to claim both NFL and Super Bowl MVP awards.

But while Mahomes has been more than willing to take on the responsibilities as a team leader he is not quite as prepared to assume the job of the NFL's frontman.

"There's several guys that could be the face of the NFL," he said. "Just how good the quarterback play is now, guys come in here year in and year out and play great football.

"Lamar (Jackson of the Baltimore Ravens) won the league MVP last night and he was a unanimous choice and had one of the best season of all-time at the quarterback position so there's guys like that it seems every year.

"A lot of young quarterbacks and still a lot of veteran guys are playing at a very high level.

"I'm just try to be the best Patrick Mahomes I can be and win football games."

During the postseason, with Mahomes leading Kansas City's explosive attack, no lead has been safe.

In the divisional playoffs, the Chiefs fought back from 24-0 down to beat the Houston Texans and then erased a 10-0 Tennessee Titans advantage in the AFC championship.

The strong armed, charismatic leader has become a one-man highlight reel with his no0look passes and scrambling wizardry.

In just his second year as a starter, statistically few have been better.

Mahomes became only the second quarterback with 5,000 passing yards and 50 touchdowns in a single season.

With his outrageous skill, blue collar work ethic, and self-belief, the Chiefs could be on the cusp of a dynasty.

"We will enjoy this and then we come back next year it is going to be the same hard thing, the same amount of tenacity, dedication every single day," said Mahomes, looking forward to next season even as the champagne corks were popping on the current campaign.

"We're going to take it one day at a time, one year at a time and try to put together great years.

"Then at the end of it all we will have no regrets on where we are at.

"As long as we keep the people we have in this organisation, on this team with the coach we have we have a chance to be good year in and year out but it is not going to be easy." 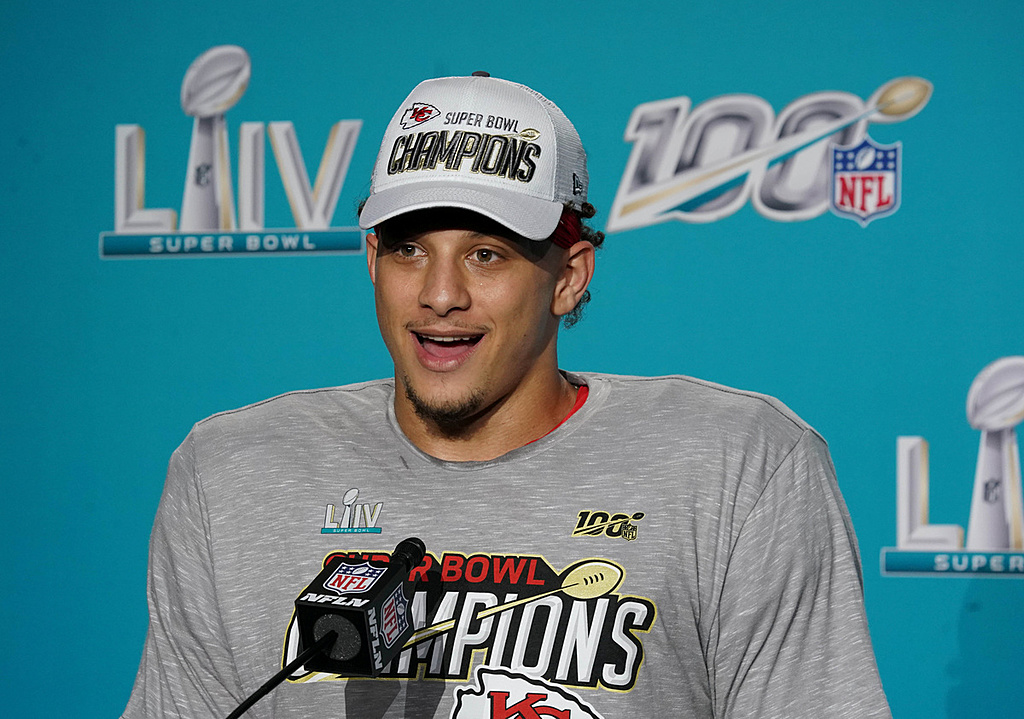 Chiefs QB Mahomes far from complacent after Super Bowl triumph
Patrick Mahomes, one day removed from leading the Kansas City Chiefs on a Super Bowl comeback for the ages, said…

That was a special fourth quarter from Patrick Mahomes.

Chiefs quarterback Mahomes took the award after taking over the clash with San Francisco 49ers in the fourth quarter, and…