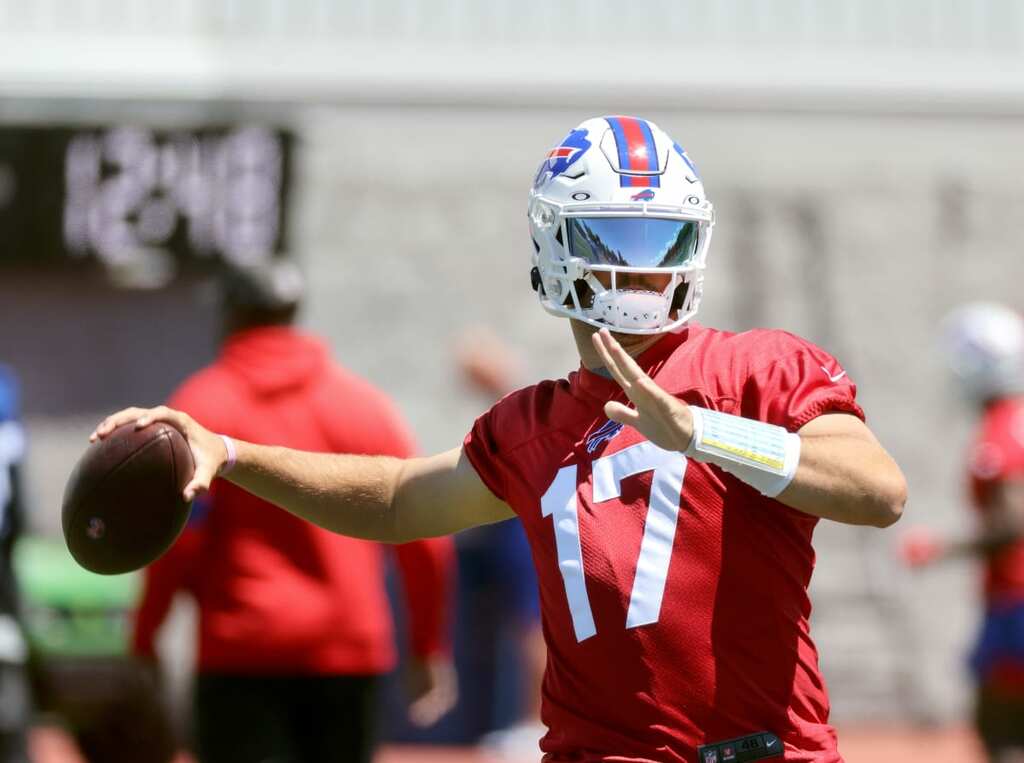 After researching the NFL player pool at quarterback, running back, wide receiver and tight end each week over the past few seasons, I will go on a new path for the daily games in 2021. I continue to make projections, and this baseline will be used to identify possible values at each position during the season.

In the daily games, we see each week players with low salaries post difference-maker scores. The key to winning is mixing a core of studs with some undervalued options that post impact scores for their price point.

Depending on the format, the goal is to find players that will score three or four times their salary to have a shot at GPP (grand prize pool).

Over the past four weeks, the Bills have scored 156 points (39 per game), highlighted by 18 touchdowns and eight field goals over 48 possessions. Buffalo’s quarterbacks have a rushing score in three straight matchups while delivering 9.3 yards per pass attempt. Allen moved to fourth in quarterback scoring (28.86 FPPG) thanks to impact games in Week 3 (367 combined yards with five touchdowns) and Week 5 (374 combined yards with four scores). In 2020, Allen had a dull effort vs. the Titans (281/2).

Allen almost feels like a rerun as I’ve listed him as the top quarterback over the past three weeks. He’s playing well with another favorable matchup.

After five weeks, Burrow sits 18th in quarterback scoring (21.17 FPPG) and has yet to deliver a difference-maker showing for the daily games. He had a floor of two touchdowns each week while seeing his passing attempts rise over the past two contests (32 and 38). Over this span, Burrow gained 644 combined yards with four scores. On the year, he has strength in his completion rate (71.7) and yards per pass attempt (8.8). Cincinnati continues to focus on the run game, leading to only 29 plays per week over the first five weeks.

The Lions are league average defending quarterbacks (1,345/10) despite quarterbacks gaining 10.0 yards per attempt. Their defense allowed 10 touchdowns and 76 points over their first two games against San Francisco and Green Bay. Detroit also has risk vs. the run (4.4 yards per rush), with backs scoring six times on the ground.

Burrow has the tools to shine in the passing game, but he needs the Bengals to fall behind early. His success in 2021 projects that 40 passes would produce 352 yards and three scores. His price point plays well if Burrow reaches his projections in Week 6.

At this time last week, McCaffrey looked close to returning to game action. After two games, he should return to action vs. the Vikings. Carolina stated that McCaffrey has a 50/50 chance of playing on Sunday. Over his first two games, he gained 324 combined yards with one touchdown and 14 catches. Even with success over this stretch, he didn’t have a run over 20 yards while averaging 3.8 yards per carry.

Minnesota allowed 4.5 yards per rush in four straight matchups (ARI, SEA, CLE, DET), with a rusher scoring one touchdown each week. They give up 4.7 yards per carry on the year, with backs catching 28 of 30 targets for 204 yards.

When on the field, McCaffrey has the best running back opportunity in the game due to his high floor and ceiling in the passing game. The only question comes from finding the right combination of players to build a winning roster behind in a salary cap game.

The quiet ride of Taylor ended over his last two contests, in which he gained 283 combined yards with three touchdowns and six catches. His success lifted him to 11th in running back scoring (16.88 FPPG) in PPR leagues. However, the most frustrating part of his game comes from his usage. Indy has only had him on the field for 50.3 percent of their offensive snaps. Last year, Taylor gained 230 combined yards with two scores and seven catches against Houston in two matchups.

In their last four contests, the Texans have given up 30 rushes or more, leading to 598 yards on 137 carries with nine touchdowns. Houston has allowed six touchdowns and eight field goals over 21 possessions.

The Colts need a win in the worst way, and they should ride Taylor harder in this matchup. Sports Illustrated has him projected for 130 combined yards with 1.5 touchdowns and three catches.

The Chiefs will score plenty of points, and Washington’s defense continues to fall short of expectations. As a result, McLaurin has multiple-touchdown upside while also having a chance to hit on a long play.

Beasley looks to be a low-value hookup with Josh Allen while also being a potential double stack option with Stefon Diggs.

Through five weeks of action, Kelce has averaged 18.18 fantasy points in PPR leagues. He finished the past two games with a low output in yards (23 and 57) after breaking out of the gate with 20 catches for 289 yards and three touchdowns over the first three weeks.

Tight ends have 26 catches for 279 yards and one touchdown against Washington, though the Football Team has only faced one top-tier player (Kyle Pitts – 4/50). The Saints and Giants wheeled out relatively weak options at tight end in Week 2 (Kyle Rudolph – 2/25) and Week 5 (Adam Trautman – 2/43).

SI Sportsbook posted an over/under of 56 for this matchup, pointing to a high output offensive game for Kelce and the Chiefs’ passing game.

A short week and a case of COVID-19 for Dallas Goedert opens up a bump in targets for Ertz in Week 6. His play progressed in Week 3 (4/53/1) and Week 4 (6/60) while working as the TE2 for Philly. The Eagles had him on the field for 56.4 percent of their plays this season. His matchup against Tampa should lead to 80 percent of playing time and a chance at double-digit targets.

The Week 6 projections are up at SI Fantasy, with a second update coming Saturday in the morning after all practices close Friday night.

Senior analyst Shawn Childs is a multi-sport, high-stakes fantasy legend with lifetime earnings in the high six-figures. He has been providing in-depth, analytical breakdowns for years all while helping his subscribers to countless titles and winnings across season-long & DFS. An inaugural inductee of the NFBC Hall of Fame, Shawn can teach you how to prep like a champ!