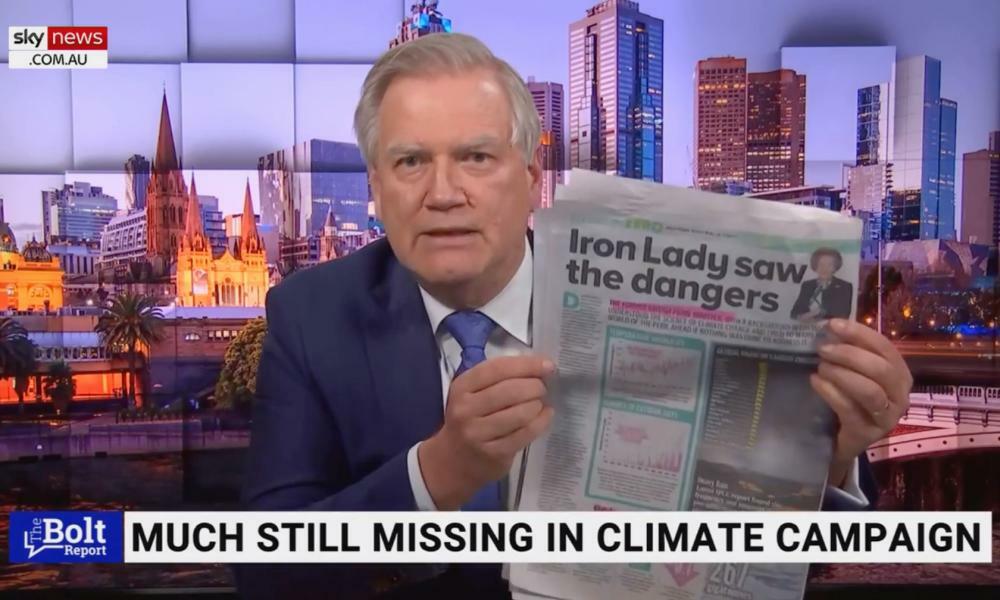 “Millions of Australian readers would have got a shock this morning when they picked up their Murdoch newspapers around the country,” Bolt told his Sky News Australia audience after the company published 16-page wraparounds in every tabloid.

“Prime minister Scott Morrison will actually be delighted because he can now have the Malcolm Turnbull-type policy that he wants – net zero emissions – and take it to the next big global warming conference in Glasgow in November, knowing that he has the backing of the Murdoch media.”

On Monday, Murdoch’s Australian arm launched a major editorial project, Mission Zero, to “inform Australians about the key environmental and climate issues of our time” in support of net zero emissions by 2050.

Ison and O’Shanassy said while they had not officially endorsed the campaign they were pleased to be offered a platform to share their views.

“News Corp has now joined the long list of scientists, environmentalists, business and community leaders calling for climate action. That’s welcome and we would welcome Andrew Bolt making that shift too. He and the Morrison government are the only ones left.”

Mission Zero was immediately criticised by some supporters of climate action, including the former prime minister Kevin Rudd.

Bolt, who says he does not agree drastic action is necessary, added his voice to the backlash, agreeing with Rudd that it was a “big U-turn”.

“Most of these same newspapers campaigned against Kevin Rudd’s global warming policies and against Labor’s later carbon tax,” Bolt said. “You should worry when big business, big media, big government, they all get into bed like this.”

The commentator added he had been assured by his editors that “we still believe in debate here unlike the ABC” and he was free to say what he liked.

When announcing it would ramp up its company-wide coverage of climate change last month, the executive chairman of News Corp Australasia, Michael Miller, said his conservative commentators woudn’t be “muzzled”.

“I know I’ve lost the argument,” Bolt said. “My whole company’s against me. I know that against these huge players, all the big political parties, my own employer, all the media and big media outlets, what am I? Just someone on the sidelines. Someone just howling on the sidelines, but telling you the truth.”

Bolt mocked the coverage, saying it urged readers to “forget all that stuff we used to say, that it would ruin us” and to now believe there would be a $2tn benefit to the economy in reducing carbon emissions. “It’s rubbish,” he said. “I don’t buy it, not the arguments here at any rate.”

Bolt proceeded to hold up the wraparound and fact check the articles.

“But what good would it do me going through all this and picking out the obvious flaws,” he said. “Who cares about the science when we’re talking about a religion?”

O’Shanassy said the world was moving too fast to get stuck on what could be seen as hypocrisy by News.

“It’s always important to consider where organisations say they want to go rather than where they’ve come from,” she said.

The Sky News host Alan Jones is no fan of a net zero emissions target, telling his audience last week it would entrench in Australia a “lower standard of living” and that regional areas would bear the brunt of it.

Two years ago the News Corp executive chairman, Rupert Murdoch, said “there are no climate change deniers around I can assure you”, after he was asked at the corporation’s AGM why his company gave them “so much airtime” in Australia.

The new campaign, which was not published in the Australian newspaper, promised to be devoid of “partisan sniping or politicising”.

“Perhaps the major reason that action on climate change has so repeatedly stalled in this country is that the debate has fallen victim to a culture of constant complaint,” the first Mission Zero article said.

“That nothing is ever good enough and everything is too little too late. Such extreme negativity does nothing to encourage progress and so here you will see only positive stories: Real, practical and pragmatic solutions that will help the planet and also help Australia’s interests as well.

“And so welcome aboard Mission Zero, the most important mission on Earth. Sometimes nothing is everything.”

The Australian’s editor-in-chief, Christopher Dore, did not respond to questions about the broadsheet’s role in the campaign.