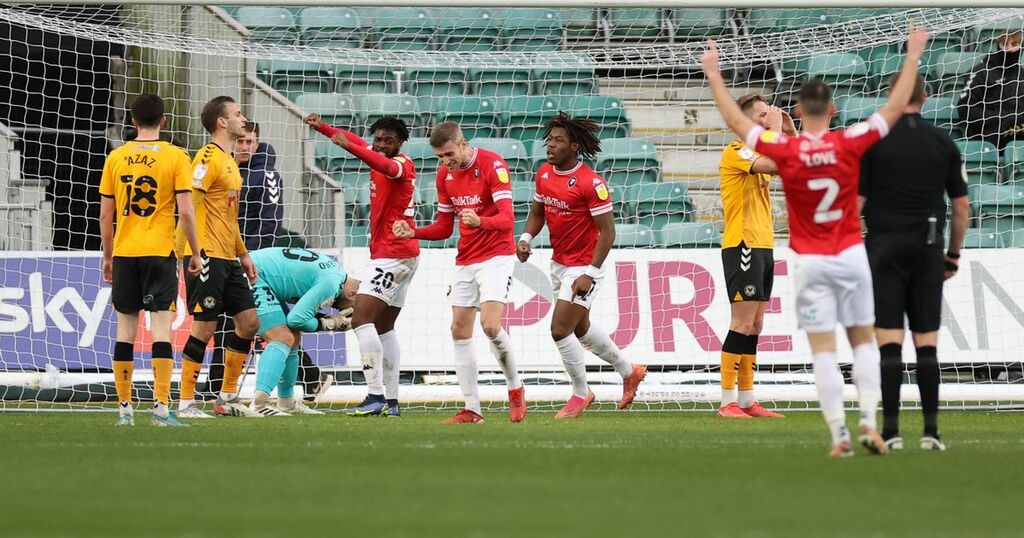 Newport County suffered in silence at a deserted Rodney Parade as Salford City took advantage of the lack of fans to ease to a comfortable victory.

The County supporters inspired their side to stirring comeback victories over Sutton United and Port Vale last month. But, after Salford took control with goals either side of half-time, James Rowberry’s men never looked like getting back into this match, which was played behind closed doors due to Welsh Government restrictions.

The lack of atmosphere contributed to a slow start to the contest, but County should have been ahead in the 11th minute when League Two top scorer Dom Telford spurned a glorious chance.

The 17-goal striker seemingly had a tap-in only a few yards out from Jake Cain’s cross from the right, but he claimed he was pulled back by a defender and subsequently failed to get enough on his effort, allowing former team-mate Tom King to gather the loose ball comfortably for the visitors.

King’s opposite number Nick Townsend was called into action for the first time in the 14th minute as he denied Brandon Thomas-Asante before Courtney Baker-Richardson hooked wide from Robbie Willmott’s corner at the other end.

Oli Cooper curled one just wide from the edge of the area midway through the first half and the midfielder then crossed for Baker-Richardson, whose flicked effort hit the side netting, as the hosts continued to have the better of the early chances.

But Rowberry’s men failed to build on a promising start and were made to pay a minute before the break.

There was a warning on 35 minutes when Townsend had to be alert to prevent Matty Lund’s side-footed shot from finding the bottom corner.

And Salford then made the breakthrough in the 44th minute when some sloppy defending allowed Josh Morris to drive past Townsend via a deflection off Finn Azaz and the post.

A frustrated Rowberry sprinted off at the break, but whatever he told his players during half-time failed to spark them into life.

Aramide Oteh headed wide from a Donald Love free-kick before Thomas-Asante doubled Salford’s lead on 52 minutes, waltzing through the County defence after Cain had given the ball away and driving confidently past Townsend.