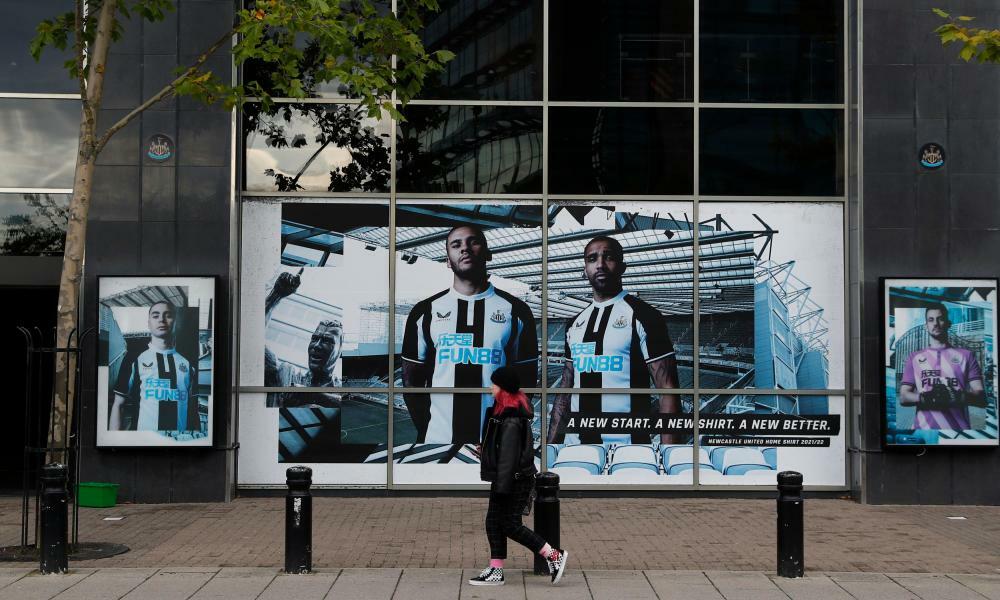 So imminent it may already have been signed and sealed by the time you’re reading this, Mike Ashley’s sale of Newcastle United to a Saudi Arabia-led consortium has provided grist to the mill of daily football emails so desperate for #content during the international break that Wednesday’s fun-filled epistle was about austerity, welfare cuts and Boris Johnson telling fibs at the Tory party conference. But with the Newcastle takeover the only show in town, today it behoves us to put such depressing pontifications on the back-burner and address far more cheery topics. Specifically, the reprehensible human rights abuses, torture, executions, state-sanctioned assassinations and bombings for which the Premier League club’s prospective new owners are responsible.

But first, a pre-emptive strike in an almost certainly futile bid to halt the inevitable whataboutery of Geordies who will of course complain that they alone are being picked on by the Fiver and Big Paper, while the moral shortcomings of owners of clubs like PSG, Manchester City, Chelsea, Manchester United, Leicester and others go unremarked upon. They haven’t gone unremarked upon; they have been remarked upon repeatedly at great length and will continue to be remarked upon long into the future. The evidence is there, freely available and easily accessible on Big Website.

The latest development in this ongoing, acrimonious saga came about when Saudi Arabia resolved its TV piracy row with Qatari network beIN Sports, and provided questionable assurances that the country’s Public Investment Fund (headed by Sheikh Mohammed Bin Salman), not Saudi Arabia (headed by Sheikh Mohammed Bin Salman) itself will be in charge of the day-to-day running of Newcastle. The same PIF, incidentally, that friend of the Fiver and Big Boy writer Tariq Panja pointed out owns the airplanes in which members of a murder squad were flown to and from Istanbul in order to assassinate journalist Jamal Khashoggi, before chopping him into tiny pieces with a bone saw. We can but presume the Premier League considered this a massive coincidence.

Fed up with seeing their club reduced to shuffling zombie status under the stewardship of the hated sports tat tycoon Mike Ashley, some Newcastle fans are prepared to look past the myriad moral shortcomings of the new regime of sports-washers, if it means replacing Ashley with somebody even more loathsome who might buy them expensive upgrades on Sean Longstaff and Matt Ritchie. Celebrating Ashley’s departure is all well and good, but actively cheerleading on behalf of a replacement responsible for far worse atrocities seems more than a little grim.

The Fiver gets it. We really do. Newcastle fans love their club and hordes of them have remained loyal to it through thick and an awful lot of recent thin. They are desperate for a change of ownership and have no say whatsoever in who gets to take over from Ashley. And if this desperation means being exploited as unpaid propagandists by a tyrannical regime trying to buff and polish its global image, then so be it. It would, however, be mildly reassuring if the only dilemma most Geordies find themselves grappling with now they’ve hit the jackpot didn’t solely revolve around which £100m player to spend their winnings on first.

Update: Twenty minutes late – not bad for a Fiver prediction

It’s Thursday, it must be Belgium 1-2 France in the Nations League semi-final. Join Simon Burton for live coverage from 7.45pm (BST).

“Hearing my parents’ story makes you want to fight even harder to give back everything they sacrificed for us. I couldn’t ever repay them – they risked their lives – but the life I try to give them is the one they dreamed of giving us” – Athletic Bilbao player Iñaki Williams talks to Sid Lowe about how his family crossed the Sahara in search of a better life.

Football Weekly Extra has landed! Join Max, Barry and co for all the midweek talking points over here.

“I thoroughly enjoyed the football-light lead story in Wednesday’s Fiver. As the STOP FOOTBALL campaign worked so well, can I ask that The Fiver STICK TO POLITICS?” – Darren Leathley.

“If I were to mention Southend and you were to include this letter, that would be four Southend mentions in as many Fivers. What a time to be alive!” – Phil Jones.

“Much as I love a bit of 90s nostalgia, I think sticking up a pic of drum-botherer Dave Grohl instead of Laurence Llewelyn-Bowen below your letter from Tom Paternoster-Howe [Wednesday’s Fiver] was a bit much” – Tim Jones.

“On a good day, I’m happy to see one mirthful entry in Fiver letters, so I was mesmerised by Wednesday’s offerings which were all solid gold content. I only hope that Thursday’s letters aren’t besieged once more by self-referential, football-less, meta-claptrap” – Neil Dobson [sorry – Fiver Ed].

Send your letters to the.boss@theguardian.com. And you can always tweet The Fiver via @guardian_sport. Today’s winner of our prizeless letter o’ the day is … Tim Jones.

Wednesday night’s games in the National Women’s Soccer League were paused in the sixth minute as players linked arms in solidarity amid recent abuse allegations.

A Brighton player has been arrested on suspicion of sexual assault and released on conditional bail until 3 November, Sussex Police have confirmed.

Little Jacky Wilshere is back training with Arsenal but he has got another thing coming if he thinks he will get a contract out of it. “I am very happy to have him back,” Mikel Arteta chirped.

Aaron Ramsey has said his fitness is not a problem “with the right management”, in a dig at Juventus as thinly veiled as Weird Uncle Fiver’s bald patch.

Roberto Mancini was not best pleased by fans jeering Gianluigi Donnarumma at San Siro during Italy’s defeat to Spain in the Nations League, after the keeper left Milan for PSG this summer. “They could have put it aside for one match, because Italy are meant to come above everything else,” Mancini gesticulated.

Tottenham Hotspur Supporters’ Trust has criticised the club for its refusal to engage with fans over a number of concerns regarding the current “strategic vision” at Spurs. “The recent mis-steps of the club’s board have been well-publicised and resulted in fierce criticism,” THST fumed.

And six Premier League clubs have applied to take part in a safe-standing trial from 1 January. Chelsea, Liverpool, Manchester City, Manchester United, Tottenham and Wolves are among the top-flight clubs to have installed rail seating. The trial will see fans allowed to stand at top-flight games in England for the first time in over 25 years.

These 60 breakout stars from around the world are talented, ambitious – and all younger than The Fiver. Behold the Next Generation 2021! Plus, catch up on our Premier League list with fringes galore.

Max Rushden will be getting some entirely normal messages on various Social Media Disgraces after asking: is it time to stop picking unvaccinated players?

The good, bad and ugly of Mike Ashley’s reign as Newcastle owner, by Louise Taylor.

Tammy Abraham gets his chat on with David Hytner about relocating to Roma and the boost it has given his England hopes.

Quiz time! Test your knowledge of international caps, why don’t you.