New Zealand's Latham unbeaten on 215 as Bangladesh strike back 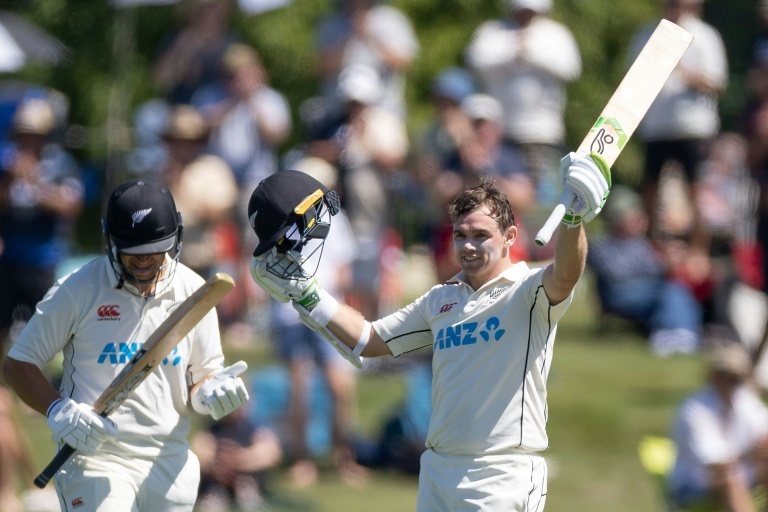 Christchurch (New Zealand) (AFP) - Tom Latham reached his second Test double century and then enjoyed some luck as New Zealand piled up 423 for five at lunch against Bangladesh in Christchurch on Monday.

Bangladesh fought back on the second morning of the second Test with four wickets and it would have been five had Taskin Ahmed held on to a regulation caught-and-bowled chance when Latham was on 208.

A leading edge from the New Zealand captain popped back towards a diving Taskin who put both hands under the ball but failed to secure it.

Latham moved on to be not out 215 at lunch with Tom Blundell due in next after Daryl Mitchell was caught behind for three off Shoriful Islam in the final over of a session that belonged to Bangladesh.

After resuming the day at 349 for one, Devon Conway, who was 99 not out overnight, brought up his century with a boundary off the first ball of the morning and had advanced to 109 before he was dismissed.

Latham called for a quick single and a sharp throw from Mehidy Hasan ran out Conway.

The Bangladesh players then formed a guard of honour for long-serving New Zealand great Ross Taylor as he made his way to the crease in his final Test before retirement from red-ball cricket.

Taylor, New Zealand's most prolific run-scorer, opened up with some trademark shots -- a cover drive to the boundary followed by a cut past point for four.

Just as the 37-year-old was looking comfortable, on 28 he edged a full Ebadot Hossain delivery to Shoriful at square leg and walked off to a standing ovation.

Henry Nicholls lasted only four balls before he edged Ebadot to wicketkeeper Nurul Hasan for his second consecutive duck before Mitchell fell on the stroke of lunch.

Shoriful has taken two wickets for 69 and Ebadot two for 143.