New Zealand has just joined an overtly anti-China alliance – are the economic risks worth it?

The uncertainty over whether Jacinda Ardern might land a White House meeting and photo opportunity with US President Joe Biden was perhaps fitting, given the lack of clarity about one of their main topics of discussion.

On Monday in Tokyo Biden launched his Indo-Pacific Economic Framework (IPEF). He was flanked by the three other leaders from the “Quad” alliance: Japan, India and Australia, whose new prime minister, Anthony Albanese, was speedily sworn in so he could reach Tokyo in time.

Ardern joined by video and plans to discuss the IPEF directly with Biden in Washington next week, White House COVID rules permitting. But despite the high-profile launch, the IPEF remains an enigma, a high-level idea in search of substance.

We know it has four pillars: trade, supply chain resiliency, clean energy and decarbonisation, and tax and anti-corruption. We also know 13 countries have signed up: the Quad plus New Zealand, Brunei, Indonesia, South Korea, Malaysia, the Philippines, Singapore, Thailand and Vietnam.

The next few months will be spent scoping the framework – something you’d expect might happen before countries opt in. But the lack of substance doesn’t matter for now. The launch was symbolic, applauding US re-engagement with the Asia-Pacific (now rebranded Indo-Pacific) region.

That was the easy part. Actually bringing the IPEF to fruition faces major hurdles.

Most commentators have homed in on the geopolitical conundrum. The Indo-Pacific Strategy issued by the White House in February complained that:

[China] is combining its economic, diplomatic, military, and technological might as it pursues a sphere of influence in the Indo-Pacific and seeks to become the world’s most influential power.

The US views the IPEF as the vehicle to reassert its economic primacy. And Australia and Japan are fully on board.

The IPEF gives Albanese an early opportunity to dispel election campaign suggestions he is soft on China, while distinguishing himself from his predecessor Scott Morrison’s belligerence as trade tensions with China escalated.

Aotearoa New Zealand has a bigger dilemma. For years successive governments have sat on the fence, assuming they could divorce the country’s economic dependency on China from strategic alliances that were increasingly anti-China.

Read more: ANZUS without NZ? Why the new security pact between Australia, the UK and US might not be all it seems

To have credibility, the US also needs broader buy-in from the region. Seven of the ten ASEAN countries have agreed to participate. But these are early days. Few will want to jeopardise their relationship with China for nothing tangible in return.

US unions have already targeted Malaysia, Indonesia and Vietnam for their poor human rights and labour records. They are hardly likely to accept US demands that they accept “gold standard” labour laws.

The second hurdle is US domestic politics. There is no question the IPEF will put “America first”. But internal US consultations reveal a battle between two camps on what this means.

The Democrats’ core labour and environment base has been promised a new trade model that prioritises workers, the environment and domestic communities ahead of US corporate profits.

They’re rallying behind US Trade Representative Katherine Tai who is responsible for the trade pillar of the IPEF. Its broad scope includes the digital economy and emerging technology, labour commitments, the environment, trade facilitation, transparency and good regulatory practices, and corporate accountability.

These are all chapters in the Trans-Pacific Partnership Agreement (TPPA), including the super-sensitive issue of cross-border data flows and data localisation. But Tai’s trade mandate excludes the domestically volatile issues of market access for goods, including agriculture, which is what most countries, including New Zealand, really want.

The US corporate lobby, on the other hand, wants to revive the tariff-cutting agenda of the TPPA, which Tai rejects as a 20th-century model that is not fit for purpose.

And corporate America wants to secure strong rules to protect Big Tech from new regulation, something that falls within Tai’s “trade” mandate. They seek a champion in Secretary of Commerce Gina Raimondo, who oversees the other three pillars.

During this week’s White House briefing on the IPEF, Tai made the administration’s priorities crystal clear. While traditional stakeholders have to be part of the solution, she said, they will be

ensuring that other stakeholders, like our workers, like our environmental organisations, the ones who are the smartest about climate and the policy solutions that we need, that they have premier seats at the table and that they will be influencing and shaping the policies that we create.

Is the IPEF worth it?

Of course, the IPEF may never be concluded. It has no bipartisan support in the US. Even if the Biden administration has the best of intentions, it cannot give an assurance that future administrations will maintain improved environmental and labour standards in the US or honour commitments to other countries taking part in IPEF.

The Biden White House wants to avoid putting the deal to a vote in Congress. But once it drags into the next presidential election cycle it risks falling into the abyss behind the TPPA.

Realistically, the IPEF is a “pig in a poke”. Aotearoa New Zealand and Australia need to take a deep breath and realistically assess the opportunities and threats from such an arrangement.

That means assessing it next to pressing challenges like the climate emergency, lessons from the pandemic, successive global financial crises, the largely unregulated private power of Big Tech, geopolitical rivalries in a multi-polar world, New Zealand’s obligations to Māori under Te Tiriti o Waitangi, and more.

Then they must weigh up the options: stand aside from the negotiations, pursue alternative arrangements, or establish a clear, public negotiating mandate that would truly maximise the nations’ interests for the century ahead.

Professor Kelsey was a prominent critical commentator on the Trans-Pacific Partnership Agreement. 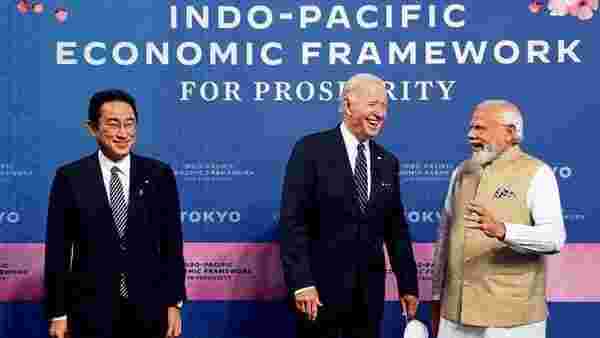