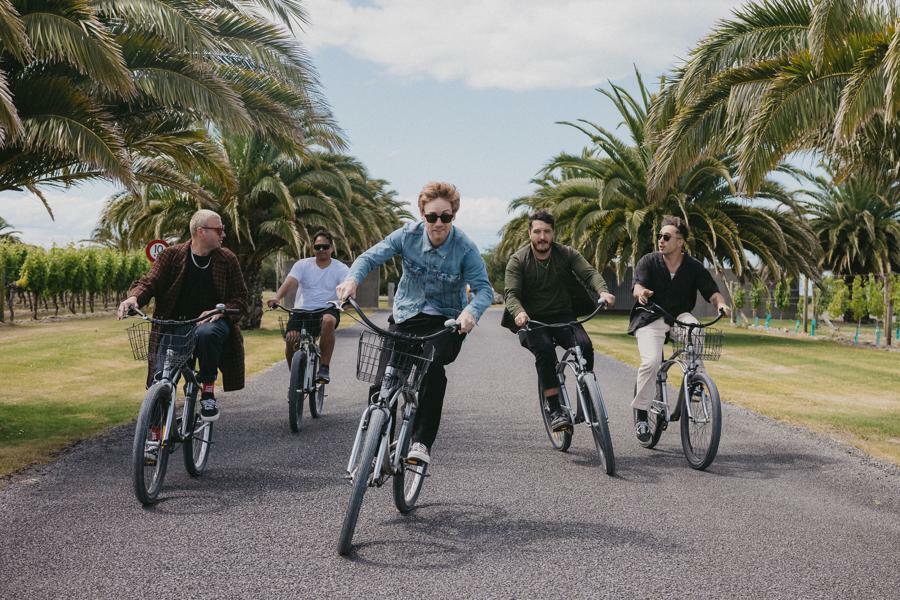 Distant New Zealand is a country many Americans dream of visiting, but most don’t ever get there. It’s a long journey by air and an expensive trip, and now COVID-19 has caused New Zealand to close its borders to nearly all travelers.

When the borders reopen, Americans may appreciate some advice where to go. I asked the members of SIX60, one of the New Zealand’s most popular bands, to recommend their favorite places. SIX60, a five-piece band that has released three full-length albums, is playing its first U.S. shows Saturday at the Fonda Theatre in Los Angeles and next Thursday at New York’s Webster Hall.

“Auckland has a bit of everything,” Matiu Walters, the band’s lead vocalist and guitarist, says about New Zealand’s capital city. “It has a great blend of city and nature. You can walk up Mount Eden and get a great view of the whole city, or head up the Sky Tower downtown. You're also about 20 minutes from amazing black sand beaches like Piha on the west coast, and you can take a ferry or chopper out to Waiheke Island for wine tasting in the Auckland harbor. There are great restaurants and shopping, and it’s an all-around great city.”

Mount Eden, one of New Zealand’s 48 volcanic cones, stands 253 feet tall and is Auckland’s highest natural point. It is dwarfed by the 1.076-foot Sky Tower which offers 360-degree views and fine dining and has dominated the skyline for more than two decades.

Visitors to New Zealand should see historic Eden Park, the country’s national stadium for cricket and rugby, says Eli Paewai, SIX60’s drummer. This year, more than 50,000 fans came to the arena to see SIX60, which describes its music as rhythm and blues pop with rock, reggae and Kiwi roots influences.

“Eden Park is the home of the All Blacks (rugby team) and the Blackcaps (cricket team), and we were lucky enough to play its first concert in 100 years,” Paewai says. “Seeing a concert or sports event at Eden Park is the best big-event experience in Auckland. There’s a great, little neighborhood outside called Kingsland with a bunch of restaurants and bars, including Auckland’s best dive bar, the 605 Morningside Drinkery.”

Paewai grew up in Hawkes Bay, about a 5 ½-hour drive southeast of Auckland on the country’s North Island, so he favors that region.

“It has Te Mata Peak, which gives you a great view of the Hawkes landscape and countryside,” he says. “Like most places in New Zealand, it has great beaches like Waimarama. You can do amazing vineyard tours, and most have great restaurants. My favorite is probably Black Barn, which also has a great, little 2,000-person amphitheater we played at about five years ago. Cape Kidnappers also has a great golf course.”

“It’s about a 90-minute drive to Manahwhai from Auckland,” he says. “You can grab lunch at the Mangawhai Tavern on the estuary and hit some white sand beaches like Langs. Further north, you have the Bay of Islands, which is visually amazing. You get on a boat and can stop on any island and have your own private island for the day. Further up, you have Waitangi and Russell. We played on the Waitangi Treaty Grounds during our last tour, the birthplace of New Zealand. A ferry out to Russell brings you to the old Duke of Marlborough pub, one of New Zealand’s oldest and most historic pubs.”

On New Zealand’s South Island, Queenstown “is one of the most beautiful cities on Earth,” Walters says. “The city sits between a mountain and the water, so you can be skiing or on a boat within 10 minutes. Queenstown has great food, it’s easy to get around and you can go up to the skyline gondola and see amazing views. It is also really close to most of the great central Otago wineries.”

Dunedin is Paewai’s favorite place on the South Island and, possibly, in the entire world.

“It's New Zealand's true college town, based around Otago University,” he says. “Check out the 660 Castle Street flat where our band was formed and where we got our name. The whole street is just student flats. The Octagon (an eight-sided plaza) is the center of the city and a must-stop. There’s a great steakhouse called the Prohibition Smokehouse and another great restaurant, Vault 21.”

“New Zealand is a great place to visit and a hard place to leave,” he explains. “The nature is amazing, including a lot of native animals and plant life you only see in New Zealand. Visitors can learn how truly diverse New Zealand is. Maori, Europeans, Pacific Islanders, Asians and all cultures who have come to New Zealand have made an incredible impact. It is probably not something outsiders first think of but something you notice once you arrive.”