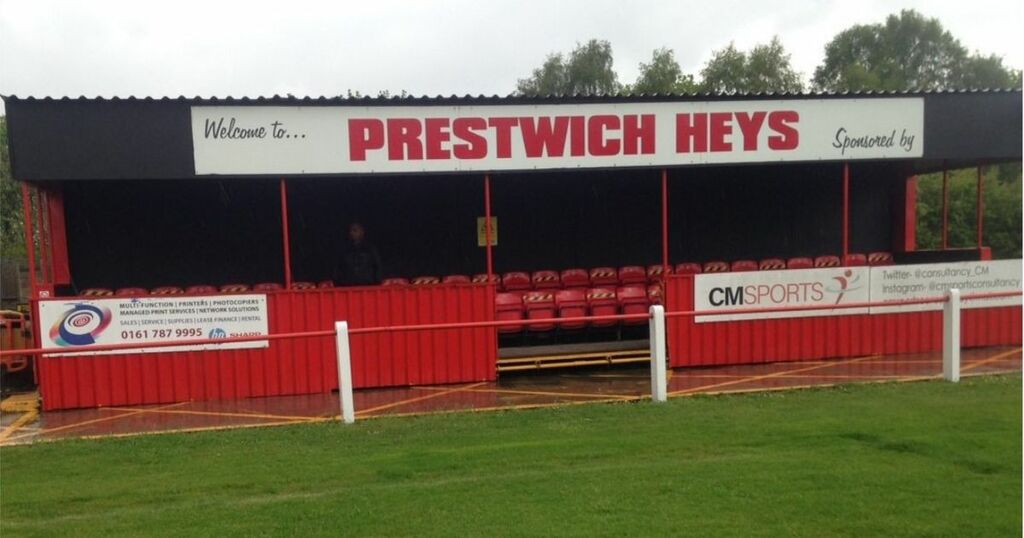 A football club is to build a new stand to comply with league rules after unprecedented success means they now play at a higher level.

Prestwich Heys FC are to replace their old 25-seat stand with a 100-capacity seating area.

The club, whose ground is on Sandgate Road, Whitefield, said the new stand was needed to comply with the FA’s national ground grading document.

READ MORE: Greater Manchester mum facing prosecution on why she's not sent her children back to school for 20 MONTHS

That stipulates that a covered seating capacity of 100 spectators is now a requirement at the level Heys are now playing at.

A supporting document from the club, said: “In recent years, good results in Prestwich Heys performance has earned them promotion into the North West Counties League Premier Division, the highest level that the club has ever played.

“Our proposal is therefore to remove the existing stand and replace with a new structure capable of seating 98 able bodied spectators and two wheelchair users.

“As required by the FA, the proposed stand will be positioned at the side of the pitch in a position of unobstructed visibility.

“Relative to the size of the football pitch, the proposed stand is small in scale.”

A Bury Council planning report on the application, said: “The proposed development would provide improvements to the club facilities for supporters
and visitors to the site enabling the club to continue to compete and play within the football league at a higher level.

“The proposed development would replace the existing stand and there is plenty of room in this area of the site to locate the new stand next to the football pitch and within the site area.

“Existing access and parking arrangements would not be affected.”

Two objections to the plans were received by the council.

Among issues raised was parking.

One objector, said: “On recent match days I have come home from work and not been able to park outside my own house due to the fact that the football grounds were full, despite extending the car parks.

“This is now getting way out of hand and the clubs activities are now encroaching on us too much. I didn’t move to Old Trafford.”

A decision notice granting the planning application by Bury Council was published on January 7.