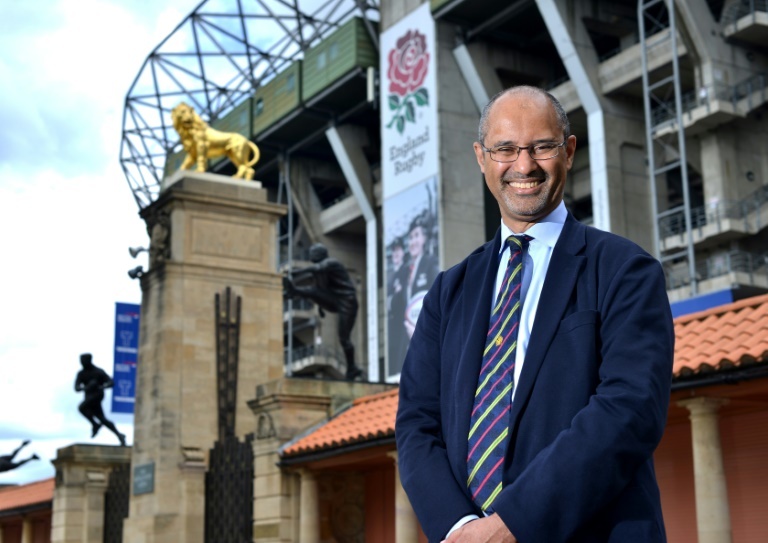 Twickenham (United Kingdom) (AFP) - New English Rugby Football Union (RFU) chair Tom Ilube said on Tuesday he plans to launch a bid for the 2031 World Cup and believes Eddie Jones's men must establish themselves in the top two of the global rankings.

Ilube was appointed in March and took over in August making him, the RFU say, the first black chair of a sports governing body in Britain.He said he wants to change perceptions.

Ilube is also targeting the World Cup which he said would be a catalyst for boosting local interest in the sport.

"That would be really exciting to have it here and you could imagine what it would be like and I think that really gives us a focus as well."

England last staged the competition in 2015.

France will host in 2023, with Australia and the United States the leading contenders to stage the tournament four years later.

"I'm not certain our system at the moment continuously generates those absolutely world-class players," said Ilube."I think England should consistently be ranked one and two in the world.Just year after year we should be there."

"To do that we need that cohort of absolutely world-class players."

The 58-year-old was born not far from Twickenham but spent periods of his youth in Africa.On Tuesday he told the tale of how he was almost shot as a boy by Ugandan dictator Idi Amin.

"My dad was from Nigeria, originally.My mother's English from up the road," said Ilube.

"We went to East Africa, into Uganda actually, at the time a dictator called Idi Amin took over, which was quite lively.At one point I was tied up and nearly shot by security guys, for some random reason.

"That's probably a whole other conversation.But eventually, we got out and got back to England."

He worked for a number of high-profile companies, including British Airways and Goldman Sachs, before becoming a private equity entrepreneur.

Ilube played rugby for the junior section of London Welsh and is a self-confessed "touchline Dad" -- his son plays the game.

As a black man he breaks the mould in a sport that in England is seen as a preserve of white, wealthy and privately educated men, even though a number of the country's top players are black or mixed race.

"There's this perception in some people's minds and that doesn't quite marry up with the reality so there is something about the communication we need to look at over time," said Ilube.

"I don't come from a posh background.I'm a state-school educated, foster-care kind of guy and I'm chair of the RFU.I think we can change perceptions over time.It doesn't change overnight."