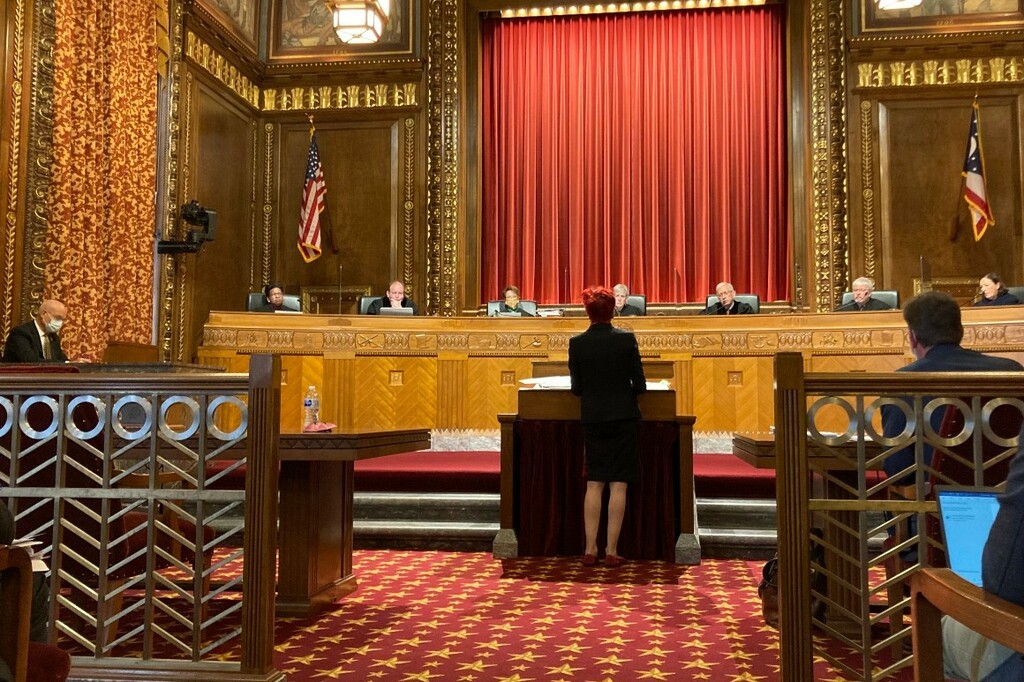 Ohio's state Supreme Court has struck down the state's new congressional map as a Republican gerrymander that violates the state constitution.

The ruling is a boon to Democrats, who could've held as few as two of the state's 15 House seats after the next election.

"When the dealer stacks the deck in advance, the house usually wins. That perhaps explains how a party that generally musters no more than 55 percent of the statewide popular vote is positioned to reliably win anywhere from 75 percent to 80 percent of the seats in the Ohio congressional delegation," state Supreme Court Justice Michael Donnelly wrote in the court's majority opinion. "By any rational measure, that skewed result just does not add up."

The court — which voted 4-3 to strike down the map, with Republican Chief Justice Maureen O'Connor joining the panel's three Democrats in the majority — ordered the GOP-controlled state Legislature to draw a new map that "is not dictated by partisan considerations" in the next 30 days.

The Ohio ruling represents Democrats' first major legal victory of the once-a-decade redistricting cycle — and perhaps not the last. Since the U.S. Supreme Court ruled in 2019 that federal courts couldn't police partisan gerrymandering, Democrats in particular have homed in on state courts to roll back Republican-drawn district lines. Earlier this week, after a lower court signed off on North Carolina's new, GOP-drawn congressional map, Democrats said they would take the case to that state's Supreme Court — where the majority of justices were elected as Democrats.

"Ohio Republicans purposefully drew gerrymandered maps in spite of redistricting reforms — and they did so because they thought they could get away with it. But they underestimated our preparedness and our tenacity," former Attorney General Eric Holder, the chair of the National Democratic Redistricting Committee, said in a statement. "It took every tool available to fight against this egregious power grab, from grassroots engagement to years of planning and preparation, to arguing before an engaged state supreme court."

Friday's decision represented the second time this week the Ohio Supreme Court had slapped down redistricting plans from Republicans. On Tuesday, the justices invalidated state legislative districts Republicans had also redrawn without Democratic support as improperly favoring the GOP. The decision came from the same 4-3 majority, with O'Connor joining the Democrats, and the other three Republican justices dissenting.

It was unclear Friday whether the court ruling would delay Ohio's May 3 primary — including the hotly contested race for the state's open Senate seat. Congressional candidates have until March 4 to file with state officials for the ballot. If the state Legislature uses its entire 30-day window to produce a new map, it would leave fewer than three weeks for candidates to file before the deadline.

The state Legislature will likely turn to its own redistricting first: The state Supreme Court gave it only 10 days to fix those maps, since the filing deadline for state legislative candidates, Feb. 4, is a month earlier than the congressional deadline.

Republicans in Ohio's state Legislature drew a map that would continue their dominance of the state's congressional delegation, despite a voter-approved ballot initiative last decade to crack down on partisan gerrymandering. The map, which was signed into law by GOP Gov. Mike DeWine, would only have been in effect for the 2022 and 2024 elections, because it passed without Democratic support in the state Legislature.

The new lines preserved two strongly Democratic seats, packed densely into cities: the districts currently held by Reps. Shontel Brown and Joyce Beatty in Cleveland and Columbus, respectively. But the rest of the state was carved into 13 districts designed to elect Republicans, albeit with competitive seats in Cincinnati, Dayton and along the state's northern border with Michigan and the western half of Lake Erie.

That northern Ohio seat could have doomed Democratic Rep. Marcy Kaptur, who was first elected in 1982. Her current district was won by now-President Joe Biden by 19 percentage points in 2020, but under the new map it would have transformed into a district Donald Trump carried by 4 points.

Kaptur called the decision "a resounding stand against unconstitutional districts that rob communities of fair representation" in a statement issued after the decision. "It is time for the Ohio Legislature to come together to create districts that are in line with Ohio's electoral competitiveness," she said.

State Sen. Theresa Gavarone, a Republican member of the state legislature's joint redistricting committee and a declared candidate against Kaptur, decried "activist judges legislating from the bench" in a statement issued from her congressional campaign.

In 2018, Ohio voters approved a state constitutional amendment that put up guardrails for legislators during the congressional redistricting process. The amendment limited legislators' ability to split municipalities and forbade them from drawing a map "that unduly favors or disfavors a political party or its incumbents." It also said a map passed solely along partisan lines would only be in effect for four years, not the usual 10 years for most states' redistricting procedures.

The amendment passed overwhelmingly, with nearly 75 percent of voters in favor.