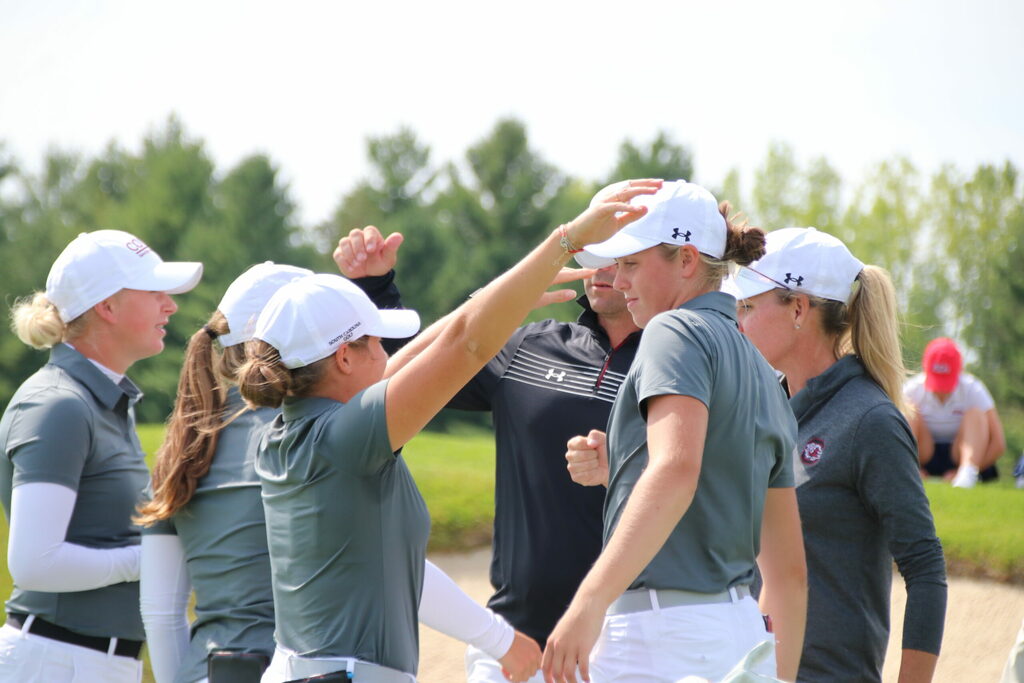 In her college golf debut, Hannah Darling didn’t make even one bogey. The highly anticipated South Carolina freshman from Scotland, the reigning British Girls champion, certainly lived up to expectations, and the Gamecocks fed off that in Monday’s first round of the ANNIKA Intercollegiate Presented by 3M.

“It’s a long year ahead and certainly this is only our first round,” head coach Kalen Anderson said, “but it’s fun to kind of come out and make a statement early. It’s a great field and there’s a lot of golf left.”

Behind Darling, who made six birdies in her bogey-free 66 at Royal Golf Club in Lake Elmo, Minnesota, the Gamecocks counted a 68, 71, and 72 to reach 10 under and open a seven-shot lead on Duke.

This is new-look South Carolina, a team that lost three seniors after last season as well as former world No. 1 Pauline Roussin-Bouchard, who turned professional last month and won her first Ladies European Tour title at the Skafto Open two weeks later.

Roussin-Bouchard remains on campus completing a psychology degree and is serving as a student assistant. Her early departure was well-communicated, Anderson said, and expected after a season during which Roussin-Bouchard won four times individually, including at the SEC Championship.

The Frenchwoman was a big part of South Carolina’s success last season. The team spent a portion of the spring ranked No. 1 by Golfweek and won four team titles. Despite an extraordinarily deep lineup, South Carolina only squeaked into the NCAA Women’s Championship, winning a playoff against Arkansas to take the sixth and final spot out of the NCAA Louisville Regional.

At the national championship, South Carolina missed the first cut to 12 teams.

Only two players return from that lineup (Paula Kirner and Mathilde Claisse), and only Claisse is teeing it up at the ANNIKA. Anderson said postseason memories are driving Gamecock returners, but largely the ill-timed stumble has been forgotten with the turnover and the start of a new season.

“It certainly drives me to a certain extent, it drives the people that were there last year,” she said. “I think this team, there’s a new energy, we got some transfers in that are super excited to be here that maybe have a little – I don’t know if I’d say a chip on their shoulder by any means but extremely coachable and just absorbing a lot. Right now, last year’s team was amazing but just a really fun group to coach right now. I think we have a lot of potential moving forward with this group.”

Darling, who compiled a 2-1-1 record for Great Britain & Ireland at the Curtis Cup in Wales earlier this month, could be a major factor for a South Carolina team looking to replace a star player in Roussin-Bouchard.

“She doesn’t overthink things,” Anderson said. “She’s a really relaxed player and very mature. She literally simplifies the game and is very laid-back.”

That’s a plus for a player who has hardly competed in the U.S. But back-to-back starts in the Northern part of the country – South Carolina will competes in next month’s Windy City Collegiate in Chicago – should ease the transition. Then it’s back to Bermudagrass in South Carolina as the Gamecocks keeps adapting – to many changes.