By Rod Nickel and Moira Warburton 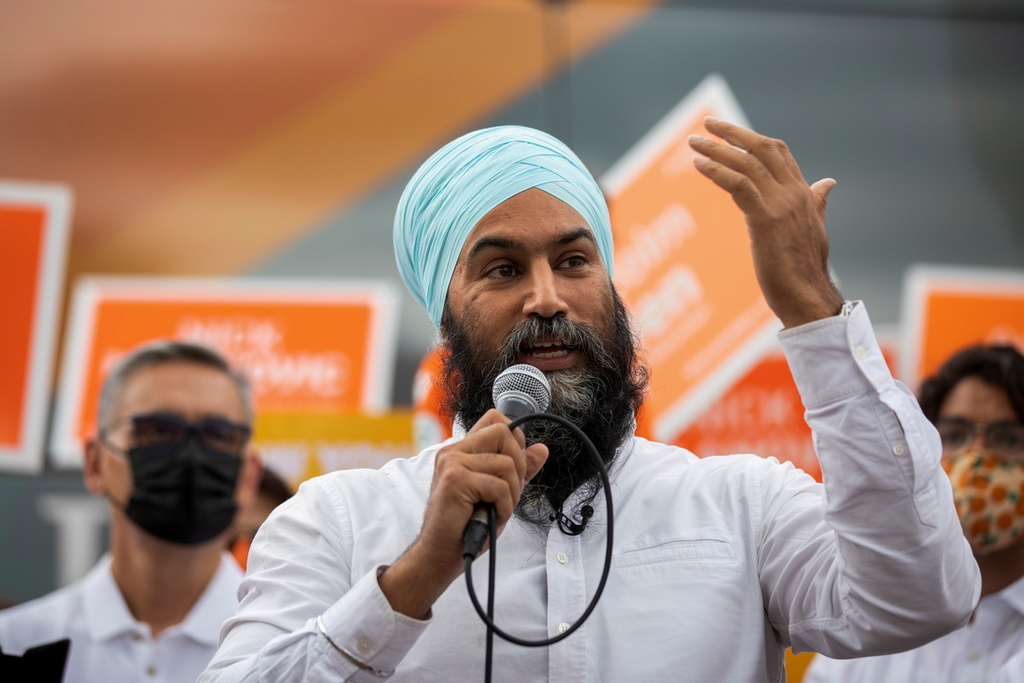 Sporting dance moves on TikTok videos in his signature neon turbans, the leader of Canada's left-leaning New Democratic Party (NDP), Jagmeet Singh, is poised to recover from a 2019 election stumble and strengthen his position as kingmaker in the country's next government.

Singh, the first member of a visible minority to lead a major Canadian federal party, helped prop up Prime Minister Justin Trudeau's Liberal minority government for two years and could resume that role. A tight race means the Liberals or Conservatives may end up with another minority after the Sept. 20 election.

Singh, 42, a criminal defence lawyer who became NDP leader in 2017, outstrips Trudeau and Conservative leader Erin O'Toole in personal popularity, according to polls and surveys. But the NDP lags both parties in polls, with 20% support among undecided voters, compared to 32% for both the Liberals and Conservatives, according to a Leger poll on Tuesday.

The NDP campaign has been on the offensive, with Singh almost exclusively visiting districts where the party does not have seats, a party official said.

The party, which currently has 24 seats in Parliament, says it has more cash than in 2019, when it finished third, and is actively trying to capitalize on Singh’s popularity and his social media savvy.

Singh’s TikTok videos regularly draw more than 1 million views and he is quick to jump on Instagram and Snapchat with updates from the campaign trail. Last year, he squared off against U.S. Democratic congresswoman Alexandria Ocasio-Cortez on the popular Among Us video game, in a livestreamed fundraiser.

In the campaign’s final days, the NDP plans to feature him in the Nintendo video game Animal Crossing and is considering projecting his image on the sides of buildings.

Whether that will translate into more votes is unclear. The NDP could also see its traditional youth base affected by the absence of college-based voting stations this year, due to COVID-19 pandemic restrictions.

However, the party is trending higher in polls this time than in 2019.

"People didn't really know Jagmeet Singh last election," said Nikki Hill, who previously helped run federal NDP campaigns and is now an Earnscliffe political strategist. "What they've seen in the last couple of years is someone they actually identify with.”

During the past two years, Singh pressed for more social spending by the Liberal government and resisted previous gambits by the government to trigger an election, saying it was unnecessary in a pandemic.

Another minority government would result in either the Liberals or Conservatives relying on Singh to support the next government, giving the NDP an opportunity to push for concessions on its priority issues such as government-paid drug or dental care, higher taxes on the wealthy, hiking minimum wage and cancelling student debt.

"People are fed up with being taken for granted by the Liberals," Singh told Reuters. "Things haven't gotten better, they've gotten worse, so they're looking forward to something different."

Asked about areas of common ground on which the NDP could work with either the Liberals or Conservatives, he said: "I'm less interested in committing to a party (to work with). I'm committed to working on the things that will make people's lives better."

"If someone wants to work with me to tax the super-wealthy, I welcome people to do that," Singh added.

Trudeau has warned that progressive votes for the NDP, instead of Liberals, may help elect the Conservatives, and he has criticized Singh's climate plan for lack of details.

The NDP has committed C$200 billion ($158.2 billion) in new spending over five years, and promises to cut emissions 50% by 2030 from 2005 levels. But at a recent leaders debate, Singh sidestepped questions about whether he would cancel expansion of the government-owned Trans Mountain oil pipeline.

The NDP needs to pull out wins in British Columbia and in urban Toronto to cement significant gains, benefiting in part from a dysfunctional Green Party, pollsters say. The NDP could pick up six seats in Canada's biggest city of Toronto, according to a senior Conservative.

The NDP may have more leverage in the next government because polls indicate it may be the only losing party, other than either the Conservatives or Liberals, with enough constituency seats to pass bills, said CIBC Chief Economist Avery Shenfeld.

Winning it all may be a step too far for the NDP, which has never held power federally. In its best showing, it romped to a shock second-place finish in 2011 and became the official opposition for a few years.

In a late August campaign stop in Winnipeg, indigenous leaders appeared with Singh at a press conference before unexpectedly endorsing a Liberal in a Manitoba parliamentary constituency.