Squid Game owes its popularity to anxieties of modern life 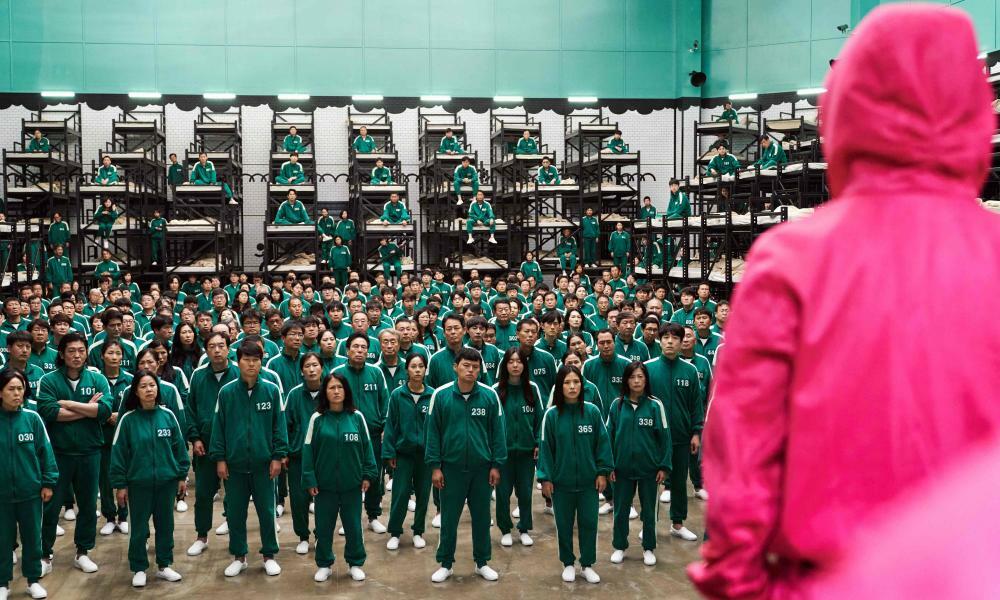 Squid Game, a Netflix series made in Korea by Hwang Dong-hyuk, was released on 17 September and within 10 days was the platform’s highest ranking show in 90 countries. It’s the first time a Korean drama has ever been at the top of the US charts; 95% of the viewers are outside Korea, capsizing the idea that the younger generation won’t read subtitles. I managed to kid myself the other day that my 12-year-old daughter had watched so many episodes in a single session she was effectively reading a book.

The premise: 456 people are catastrophically in debt, and they’re competing for untold riches in a series of feats that are sometimes whimsical, sometimes terrifying, usually both. They might have to carve round a honeycomb shape with a pin, or stay stock still while a giant robot shouts “red light” at them. Two downsides – if you lose, you get shot in the head. And there can be only one winner.

It has generated an insatiable fascination that has led to a cosplay site selling out of the villain costume, Parisian teenagers having fistfights outside a Squid Game pop-up shop in Paris, and thousands of words of behind-the-scenes revelation, in which actors recollect the “dreamlike terror” of shooting it, and technicians describe their awe at the sinister, cartoonish sets.

There’s only one season of nine hourlong episodes; you can binge it in two days, but when the kids finish it, they go back to the start and watch it again. Or they play the Squid Game world on the digital game platform Roblox. In my household, we’re all on a different episode, and nobody is allowed to discuss it – not even a spoiler risk. I think the worry is more that adult interest taints it – but someone always does discuss it, and then we have a fight. We’re trapped in a mini domestic Squid Game.

There is no question, the drama is compelling; but the intensity of the interest, specifically among the young, is remarkable. So what’s got into the kids? And are they OK?

Arguably violence and mortality defanged by carnivalesque, primary-coloured depiction have been with us since at least the middle ages – think the Mexican Day of the Dead, the French danse macabre etc. But this is a more specific and recent trope, what Mark Johnson, a lecturer in digital cultures at the University of Sydney, describes as the “death game genre” – in dystopian surroundings, whether that’s Battle Royale, the Hunger Games, Maze Runner, Exam, or Squid Game, characters game to the death. Life is trivial, victory is lavish, the rules are strategic but there’s a huge amount of luck involved: in Squid Game, there’s a tug-of-war.

Johnson elaborates over Zoom: “If you get put on the weaker team, you just lose, bad luck, you die. In Battle Royale, and you have a flick knife instead of an Uzi, you just lose.” In his view, the genre is, at heart, a critique of the “central implicit idea of the late-capitalist world, that everything is hard work, everything is skill, everybody gets to where they belong in a perfect global society. All those claims are shown to be nothing.”

Barry Watt, a psychoanalyst working predominantly with homeless young people, says it’s a very recognisable trope, “where a person or group has to be sacrificially offered up, as a way to put limits on community violence.” You can see it in early religious movements, but also in gang culture, and homeless shelters: it reflects a deep sense of precariousness. Watt also situates this within the “bigger movement of young people turning to Japanese and Korean anime and manga, looking for a response to their experience that isn’t being met by western European culture.” The characters, he says, toggle between low affect (not feeling anything) and high violence, they present quite a narrow emotional range.

He floats the idea that this might appeal to the growing number of people who identify as neurodiverse, for whom old-school storytelling, with its layers of characterisation, is perplexing. Johnson has a different interpretation, that it’s the game itself which flattens the characters, “hyper competition turns normal people into monsters”.

Squid Game has a USP within the death game genre. The underlying anxiety used to be environmental collapse, the backdrops tended to be post-apocalyptic, following some unknown weather or war event. Now the threat is debt, which feels so Victorian. Paradoxically, this hyper-real, totally unrealistic drama has lit on the anxiety that really is driving day-to-day, all-too-real mental illness. Helen Garnham, head of equalities at Rethink Mental Illness, describes how debt brings together denial, a sense of impotence because it often feels as though “nothing can be done, it can just seem overwhelming”, and a “huge stigma, people don’t like to admit to debt or seek help, they feel they have to manage it on their own”. Garnham points out this irony, that so much work has gone into reducing the taboos around mental health, “that’s what we’ve been trying to say, it’s OK not to be OK”, but debt, such an important tributary to mental illness, is still wreathed in shame.

It might not be an accident, 10 years after a global financial crash, that the entire globe is watching a drama whose core message is, “Can I ever pay back this debt? Would it not be easier to game to the death?” Maybe the kids aren’t the problem; maybe more adults should be watching it.