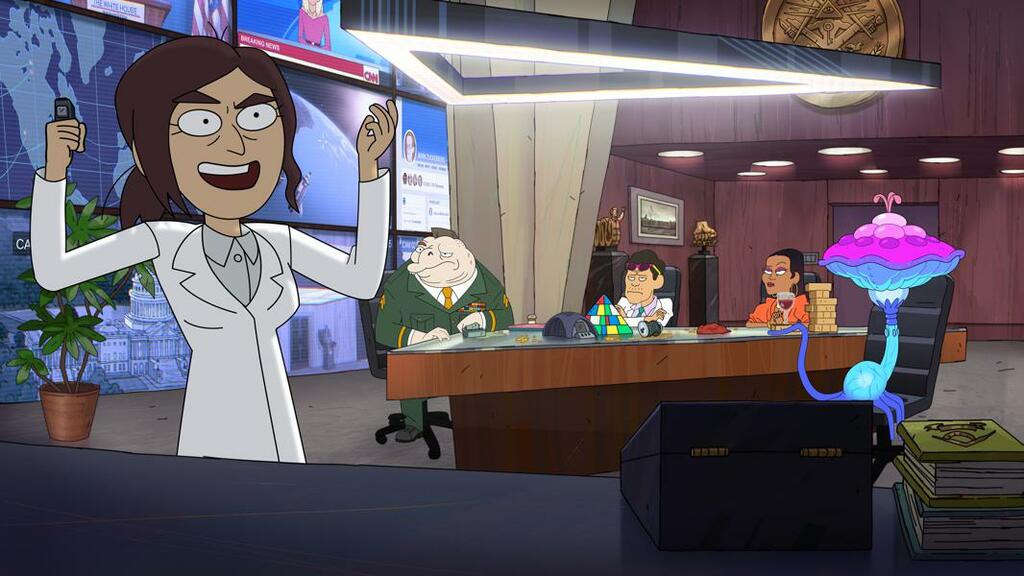 Reagan Ridley has a tough job. Her coworkers are strange, self-absorbed dolts. Her father is a drunken crank who used to run her office and has lots of ideas about how she could do better. Oh, and the Illuminati are her bosses.

That’s the setup for Inside Job, an adult-skewing animated comedy series about to debut on Netflix, created by writer/artist and first-time showrunner Shion Takeuchi with executive producer Alex Hirsch.

“Inside Job is a workplace comedy about a crazy group of people who work for the Deep State,” said Takeuchi, who first worked with Hirsch on the all-ages animated show Gravity Falls. “It's a classic idiots-empowered story. Co-workers are struggling (with) the kinds of struggles that you or I would have, but they are controlling the apparatus that controls the world.”

That this lot are actually controlling the world is not exactly comforting, though in Takeuchi’s hands it is frequently entertaining. Think Dunder Mifflin meets Ernst Stavro Blofeld, with more collateral mayhem. Somewhat incidentally, the series also reflects Takeuchi’s own journey as a first-time showrunner.

“I think it's funny because the protagonist of the show is this woman named Reagan (voiced by Lizzy Caplan), who has lots of ideas and drive, and wants to make the world a better place, (but) is not in possession of wonderful social skills,” Takeuchi said. “And she spent her time getting her promotion at the expense of her health and happiness. And her hygiene. Once she gets it, she realizes that there's more to leadership than telling people what to do.”

Takeuchi developed the story while writing for Disenchanted, the Matt Groening-produced Netflix animated comedy about a princess grappling with life in her not-very-functional fantasy kingdom.

“When I developed this story, I was a staff writer,” Takeuchi said. “And I did not know that I was developing the story of my own life in this context, because it was very much exactly the way I experienced, in a very meta sort of way, (getting the show-running opportunity). I was thrown in, and I felt like I was swimming in the deep end, so to speak, all the sudden.”

Asked if Inside Job was actually her autobiography, Takeuchi would say only, “Um, it’s loosely based on my personality and perspective on things. I can neither confirm nor deny my actual feelings.”

Nor, of course, can she confirm the creepy, robe-wearing bosses (we’ll forgo any jokes about what Netflix co-CEOs Reed Hastings and Ted Sarandos wear when they’re not on an earnings call).

Despite her talk of being tossed in the deep end, Takeuchi, 33, brought plenty of experience when she got her shot. She grew up in suburban Boston the daughter of a computer software executive and former translator, then went to CalArts, the exclusive Los Angeles-area arts school that has been a direct pipeline to Disney animation jobs for decades.

After graduating with an animation degree, Takeuchi’s first job was on Cartoon Network’s long-running Regular Show, where animators were allowed to create their own dialogue within the producers’ story outlines for each 11-minute episode.

“In 11 minutes, there's not a lot of room for (the story) to take tons of twists and turns,” Takeuchi said. “But I love the creativity of that.”

She went to become a storyboard artist for Pixar, working on deeply crafted feature-length projects Inside Out and Monsters University. After three years, however, Takeuchi decided to make a bold and unusual shift from animation artist to animation writer, because, “I really missed having some level of authorship and being able to write jokes and decide the rhythm of the scene.”

Writing for Gravity Falls and Disenchanted helped fill in Takeuchi’s resume in important ways. Now she’s what Hollywood likes to call a multi-hyphenate, a writer-animator-showrunner who brings multiple skills to the job, useful when trying to quickly and accurately communicate her vision.

“I was an artist, so I understand the artists,” Takeuchi said. “In terms of a medium, animation has visual possibilities that aren’t available to you in live action. So when you're used to drawing those things, with your brain thinking that way, you can really take advantage of what the medium is capable of. And you also know what doesn't work.”

In creating the look of the show, Takeuchi took advantage of the animation program Harmony’s ability to add subtle background effects that add to the story.

“(Harmony) enables you to take advantage of expressive drawing styles,” Takeuchi said. “We did a couple of things to give the very subtle impression that you’re looking at conspiracy footage. You wouldn't notice as a viewer, but they have the appearance of a Xerox-made, redacted document. We don't just use a clean black line. And then we do other kinds of treatments to be working on a subconscious level to remind you of conspiracies. It's really fun to think about art that way.”

In creating Reagan Ridley, “I always start with a character and what a relatable conflict is that these characters might be going through,” Takeuchi said. “They have jealousies, insecurities. They’re late for work in the morning. And through that lens, examining different forces in pop culture and different ideas that have been around for a while about conspiracies and paranormal (myths).”

For influences that helped shape the series, Takeuchi taps a surprising one, the fiery 1976 media satire Network, which debuted long before she was born.

“The way that Network deals with the sharply pointed comedic take on the satire of that time still feels fresh to me today,” Takeuchi said. “I don't really think you'll see Network in the final product in Inside Job, but it's something that I deeply admire and I just want mention.”

Less clear is who, in a sharply divided polity, might be the natural audience for Inside Job’s wide-ranging pokes at conspiracy theories, theorists, paranormal activities and the like.

“I’m guessing that they're people who are fans of comedy and animation,” Takeuchi said diplomatically. “Fans from both sides of the political divide will be into this show. I can’t really tell you, though I would be really curious to ask.”

Presuming, of course, that Hastings, Sarandos and the Illuminati would actually tell her.