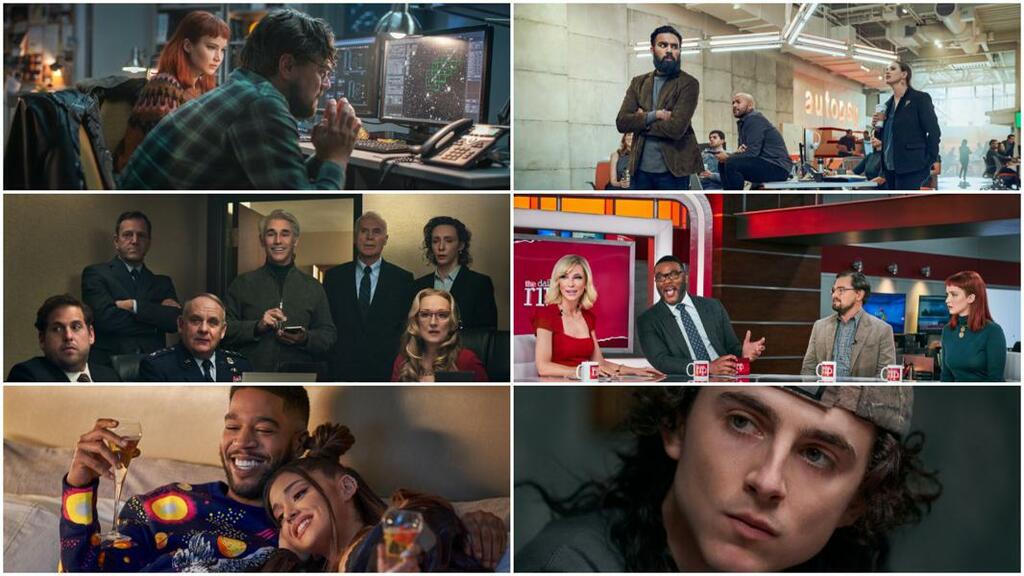 After a first trailer for their unofficial “tentpole/blockbuster” offering for late 2021 (Red Notice), Netflix just dropped a trailer for their unofficial Oscar mega-movie. The big hook for Don’t Look Up is, of course, the bonkers-sized cast. Not only does it star Leonardo DiCaprio and Jennifer Lawrence , it has a cast that includes Meryl Streep, Johah Hill, Timothée Chalamet, Cate Blanchett, Himesh Patel, Ron Perlman, Michael Chiklis, Kid Cudi and Ariana Grande.

Adam McKay directs and co-writes (along with longtime journalist/political wonk David Sirota) this comedy concerning the end of the world and the Earthlings who don’t seem to care. The plot concerns two low-level astrophysicists who stumble upon a planet-killing comet racing toward Earth and must embark on a worldwide media campaign to convince an indifferent or disbelieving public to plan accordingly.

The climate change metaphor probably won’t be subtle, but I think humanity (or at least those with the levers of power) proved a long time ago that subtly doesn’t work. Sure, this could end up just preaching to the converted, as is likely the fate of any politically-specific work in our fragmented, “art for any and all viewpoints” pop culture, but that won’t matter if enough casual Netflix subscribers watch (almost certainly) and if the film is good enough to appeal to awards season voters.

As for the trailer, it’s a remarkably efficient tease. Running just 69 second, the film implicitly announces “Netflix has Leo now too!,” with DiCaprio (still the last remaining butts-in-seats movie star) breathing heavily and acting panicked at being “here.” It then launches into a visual roll call of the all-star ensemble, with teases of halfway decent production values and just enough of the core plot (“there’s a comet heading to Earth but nobody cares”) to make the sell.

In terms of getting the job done, this is a perfect teaser and we probably don’t even need another plot-spoiling trailer. The film will play theatrically starting December 10, which is the same day as Steven Spielberg’s West Side Story. That is a little ironic as Spielberg tried to get major theater chains to play streaming Oscar contenders, comments that were widely misinterpreted as the filmmaker having a bias against streaming platforms. It’ll debut on Netflix on December 24.

I can’t imagine it not being one of Netflix’s biggest (in terms of global household viewership) original movies ever by default. I’d say “I hope it’s better than Vice,” but the Annapurna-released Dick Cheney biopic did snag eight Oscar nominations including Best Picture, Best Director and Best Original Screenplay, so...