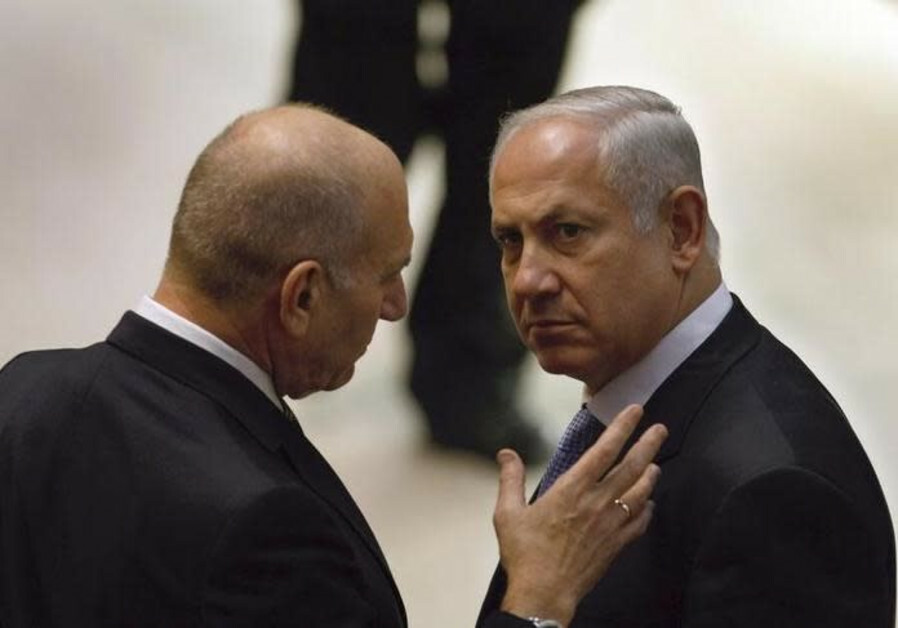 From Taipei to Toronto, Minneapolis to Melbourne, the world’s media reported Monday on the bizarre sight of two Israeli former prime ministers – men who in this century made weighty decisions affecting the peace and well-being of the country, region and even the world – facing off in court because one (Benjamin Netanyahu) is suing the other (Ehud Olmert) for calling him and his family crazy.

Scriptwriters for Israel’s satirical shows, as well as writers for late-night television talk shows in the US, must be rubbing their hands in glee at the material here.

First of all, why is Olmert calling Netanyahu “mentally ill,” as he did on two television programs last year?

Olmert is an intelligent man who obviously despises the Netanyahus and is chock-full of criticisms about them. Is that the best he can do – say they are mentally ill, an especially insensitive insult, considering that mental illness is real and something many people suffer from? Was this the only punch he could throw? Couldn’t he craft a more stylish insult?

This brings to mind one of the great monologues in literature, the “nose speech” in Edmond Rostand’s Cyrano De Bergerac. In the play, a stuffy viscount insults Cyrano, he of the extraordinarily large snoot, by saying that Cyrano’s nose is “rather large.”

“Is that all?” Cyrano replies, and then he launches into what the insulter – if he had “some tinge of letter, or of wit” – could have said instead. If the man wanted to be aggressive, Cyrano said, he could have said, “I sir, if that nose were mine, I’d have it amputated on the spot.”

Were he friendly, he could have commented, “How do you drink with such a nose? You ought to have a cup made specially!”

Were he insolent, he could have quipped, “Sir, when you smoke, the neighbors must suppose your chimney is on fire.”

And on and on and on. In other words, if the man were truly clever, there could have been so many other ways – more colorful and artful ways – to level the insult.

As for Netanyahu, is this something really worth suing about to the tune of NIS 837,000? A political enemy hurls epithets, and the answer is to go to court? Whatever happened to the art of the stinging political repartee?

Netanyahu is a huge fan of Winston Churchill, and some say he fashions himself as the British premier’s Israeli reincarnation. Then why not just pull a page out of Churchill’s playbook and parry insults with an even more clever put-down?

For instance, there is the famous, though perhaps apocryphal, exchange between Churchill and Lady Nancy Astor, a political antagonist from within his own party. “If you were my husband, I’d give you poison,” she is said to have told Churchill. And his response: “If you were my wife, I’d drink it.”

Or there is this exchange with playwright George Bernard Shaw: “I am enclosing two tickets to the first night of my new play; bring a friend... if you have one,” Shaw wrote to Churchill. And Churchill’s reply: “Cannot possibly attend the first night, will attend second... if there is one.”

Netanyahu is a soaring orator and a man of words and letters. He couldn’t come up with a counterpunch to Olmert other than suing him in court, thereby creating a spectacle?

And that is exactly what took place Monday in the Tel Aviv Magistrate’s Court: a spectacle, a circus. Olmert’s lawyers asked that the former prime minister and his wife, Sara, and son Yair submit to a psychological examination. Olmert said he had concluded from recordings he heard and conversations he had with people around Netanyahu that the family’s behavior is abnormal. Netanyahu’s lawyer responded that in a normal country, Olmert would be arrested for such remarks.

That this scene makes Israel look ridiculous around the world is one thing. But it also makes Israeli leaders look juvenile in the eyes of the Israeli public, a public that – for the good of the country – needs to have respect for its leaders.

Olmert calling the Netanyahus “mentally ill” is, unfortunately, not the exception in Israel’s political discourse.

Just take a look at what happened over the last couple of weeks. Likud MK David Amsalem took to the Knesset rostrum and called a Supreme Court justice “deranged” and suggested he was drunk when he rejected a petition Amsalem submitted. Opposition backbenchers chanted “fraud, fraud” at Prime Minister Naftali Bennett, who responded by telling one of them to “get out of my sight.” And Deputy Economy Minister Yair Golan called the residents of Homesh “subhuman.”

This is name-calling disguised as political discourse. It’s everywhere, all the time. And it makes the country look bad to others and – what in the long term may ultimately prove even more corrosive – to ourselves.