Nestled in the 'Alps of Southern California,' Lake Arrowhead holds power to heal

Three years ago, I lost Lola, the dog of my life. She was a 7-pound bundle of joy that had the power to fill my love-tank with nothing but the wag of her tail. She shadowed my every move, to the point I felt I had physically lost part of my body when she left the world.

Unable to bring her back, I went on a mad hunt to find a dog that, at least, looked like Lola. Friends warned me that I was setting myself up for the greatest letdown, yet I refused to stop the search.

And then it happened. One night while on a work assignment in Sweden, a dog appeared on Facebook that looked a little like Lola. The only caveat was that “she” was a “he” and the single photo was blurry, oh, and the dog lived in Mexico. My poor husband had suffered with me, doing all he could to heal my shattered soul. Thus, he caved into my begging and pleading, and that night, drove to the Tijuana border at 11 o’clock for a dog we had never met.

While I remained in Sweden, he bonded with this special-needs dog for several days, preparing me with the words, “Don’t expect Lola.” But I did expect Lola, and my heart sank when I met this Tijuana pup we named “TJ.”

He was scruffy, shy, mean, bipolar, and stealthily ate dog treats in dark corners of our house. Visually, he looked nothing like Lola with his snaggle tooth, watery eyes, and mullet that hung over his collar. TJ refused to cuddle, kiss, bond or ride in a car. He peed when I approached, puked when in motion and pulled away when I held him close.

When I told my husband that I had made a horrible mistake, he told me that this “rescue” was no longer about what I wanted. Now, it was all about saving TJ.

Fast forward three years, and now, I can’t imagine life without this little nugget. I won him over (or was it the other way around?) with daily hikes, cuddle sessions, and unconditional love despite his quirks. To this day, he collects pine cones when he’s anxious, does handstands when he poops, burrows deep into blankets, and squints into the sun.

Naturally, when my birthday hit this year, I had to take TJ with us on our romantic getaway to Lake Arrowhead. Since the onset of the pandemic, my husband and I had pushed pause on travel for the simple fact it had become overly complicated. But the SoCal mountain town of Lake Arrowhead seemed feasible and appeared to be a good place to get our travel feet wet again.

Located just two hours from San Diego, this lake community is often overshadowed by neighboring Big Bear, famed for its ski resorts. There wasn’t much we knew about Arrowhead other than the fact it was nestled within the San Bernardino National Forest and boasted a network of hiking trails.

So away we drove, to the quaint hideaway that won us over with its proximity to home and its distance from the world. Considered “The Alps of Southern California,” there was a stillness, secrecy and preservation about the place we noticed the moment we laid eyes on the water.

Void of buzzing jet skis and boat parties, the exclusive lake is privately owned by residents perched around its 14-mile perimeter. Measuring 2.2 miles long by 1 mile wide, the beauty of the manmade lake was enough to restore my faith in humanity.

The dream of Arrowhead dates to the 1890s when the town was nothing more than a sawmill community. Although the area had fertile soil for farming, it lacked sufficient water for irrigation. In 1891, engineers Adolph Koebig and Adolph Wood planned the Arrowhead Reservoir Company with the intention of impounding waters from neighboring creeks. Where there is water, there is potential, especially for tourism.

In 1914, the lake — originally named Little Bear Lake — was opened to fishermen, and less than a decade later, it lured the leisurely with its fashionable alpine town. In 1971, Lake Arrowhead was purchased by seven businessmen from Chicago who saw dollar signs in development. Despite fires and droughts along the way, Arrowhead’s chance to shine finally came in the 1980s with the unveiling of Lake Arrowhead Village.

Today Lake Arrowhead is home to not only “the Village,” but to lodges, marinas and a golf course. The lake itself, owned by the Arrowhead Lake Association, is preserved solely for its lucky residents.

There is one exception, however. Lake Arrowhead Resort and Spa has “lake rights” with its own private beach and dock, open for fishing and kayaking for guests. Best of all, the hotel is pet friendly.

Stacking hands on these benefits, we settled into the lakeside resort for two nights, where midweek rates drop as low as $150 per night. The property has transferred owners over the years, from Hilton to Marriott, to now the Los Angeles based investment firm, The Yucaipa Companies.

Clearly, they recognized a good thing when they saw it, showcasing a lobby with stone fireplaces, birchwood decor, and lake views. Within the three-story hotel are 173 rooms including 11 suites, plus a wellness center, Bin 189 Restaurant, a pool deck, health spa, and beyond.

Privileged perks include daily fitness classes and complimentary coffee and wine in the lobby Thursday through Saturday from 3-4:30 p.m. Within walking distance is the waterfront village, reminiscent of the 1920s, featuring over 50 shops and restaurants.

Needless to say, we maximized our stay, of course with TJ in tow ... hiking, boating, swimming, yoga, beer-tasting and savoring exceptional meals. The very pet-friendly Arrowhead Lake is like a refined dog park where people know your pooch by name. To TJ’s delight, there were pine cones everywhere.

Shortly after check-in, we went to the lobby bar for a glass of Malbec, allowing TJ a chance to acclimatize to the good life. The copper bar beckoned early happy hour with its mountain decor complete with antler chandeliers, leather couches, stone fireplaces and an outdoor patio facing the lake.

Next door to the resort was Lake Arrowhead Brewing Company, where locals go to exhale the day. Opening just three days before the pandemic, this beer-haven bravely survived the COVID storm.

It has certainly paid off. The place was packed solid, now thriving with 12 beers on the board, including Strawberry Peak, Shoreline Sour and an AleSmith collab called “Trail Mix Speedway.”

Despite the endless list of local attractions, we returned to our hotel that evening for dinner at Bin 189 restaurant. With TJ tuckered out under the table, we dug into hearty portions of Wagyu burgers, truffle fries and glazed Brussels sprouts.

We were hooked on the menu, returning the following night for grilled salmon, tenderloin and dirty martinis. TJ might have sampled his first bite of Wagyu beef, and maybe even salmon (not guilty ... guilty).

After all that consuming, we woke early the following morning to burn calories during a 3-mile hike on the Abell Memorial Trail. For some reason, the gray squirrels seemed to be moving in slow motion, meaning TJ was in full-hunting mode, barking up trees and digging into darkness.

My heart was full, watching this street-pup live his best life in the wilderness, fully safe with a warm bed, a full belly, and two people who vowed to protect him.

That afternoon, the three of us returned to the Village for lunch at Jetties Waterfront Kitchen. Heads turned as we passed, with several strangers commenting, “Look at that dog strut — he’s one proud pooch.”

That was a given. Months after we rescued TJ from the border, the good Samaritan who saved him from the streets texted us photos of his original condition. Without a single hair on his scabby body, our little buddy was just days from starvation.

Now, three years later, we had him tucked into our booth at Jetties restaurant where we sunk our teeth into poke nachos, crab cakes, burgers and fries. We washed it all down with jalapeno cucumber margaritas.

TJ might have snagged a sweet potato fry or two (not guilty ... guilty).

That afternoon, time grew wings as we window shopped, sipped coffees and toured Skypark at Santa’s Village. Less than three miles from our hotel, this 230-acre adventure park draws families with its ziplines, train rides, biking trails, entertainment, climbing walls, games and themed-restaurants and shops. Kids and teens scurried about, reminding me that my years were literally increasing by the day.

Instead of riding trails and climbing walls, we returned to the Village to board the Arrowhead Queen. This one-hour boat trip enlightened us with lake tales of residents who had lived on its shores. Among them were Brian Wilson, Doris Day, Sammy Hagar, Michelle Kwan, Max Factor, Patrick Swayze, Desi Arnaz, Tom Selleck, Shirley Temple, Ed McMahon and Liberace.

We passed homes as large as 20,000 square feet with private elevators and 20-car garages. On the banks were fisherman casting their lines for bass, trout, and carp that are restocked annually.

I was beyond impressed, nudging my husband with the question, “Could we live here?” Meanwhile, TJ fell asleep on the ship, as did I several hours later in the hotel. We napped as a family, grateful for the birthday escape we had chosen for May 2022.

For over a century, Arrowhead has lured strangers to this mountain resort for its recreational activities, stunning scenery and natural peacefulness. As a speck in its history book, it had also lured a couple from San Diego, along with their dog from Tijuana.

The three of them — healed from loss, loneliness and isolation — finally reentered the world of travel in a little place called Arrowhead, with hearts full of contentment and a pile of pine cones. 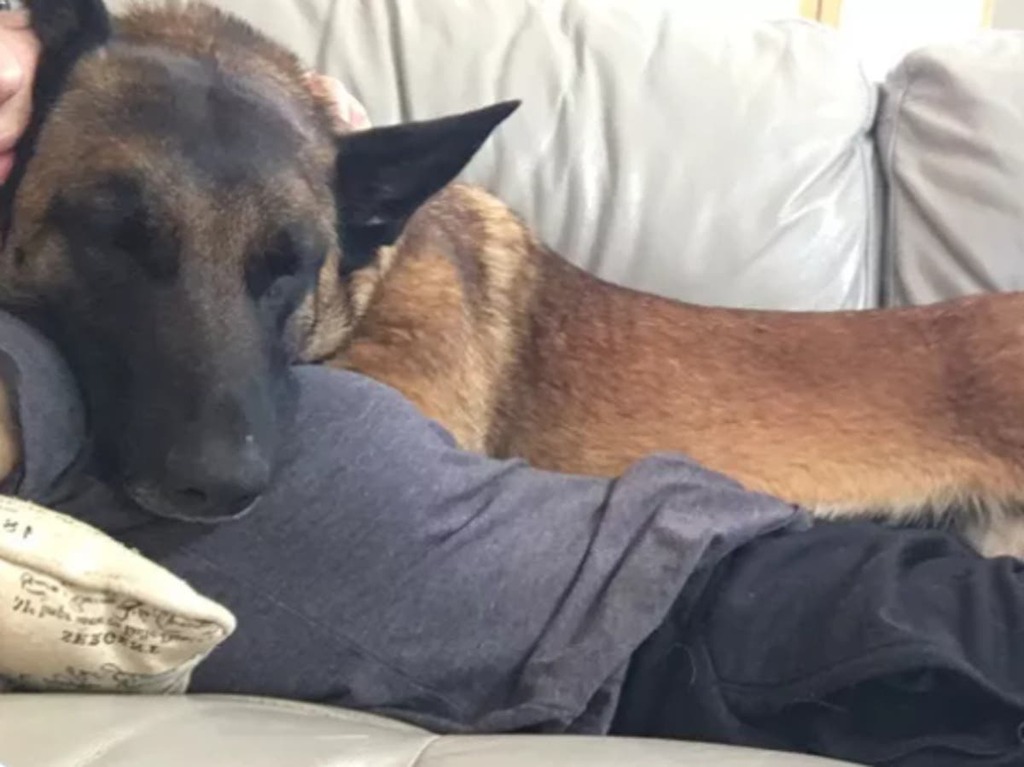 Hero pet dog saves California hiker attacked by mountain lion: ‘She’s a fighter, clearly’
‘My dog is my hero and I owe her my life’

Manchester Evening News
Every day I wake up and wonder if today is the day. Why am I not dead yet?

More than three weeks ago my doctor told me I had three weeks to live. How will I know when…