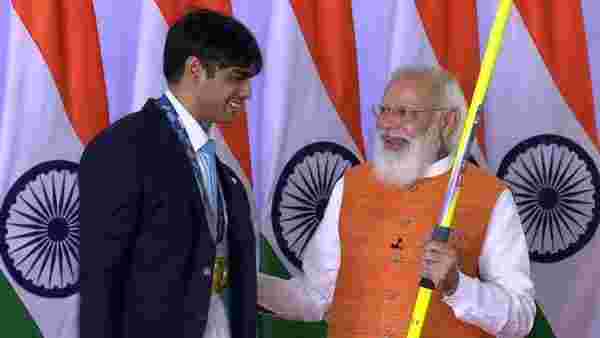 Olympic Gold Medalist Neeraj Chopra's javelin received a bid of ₹1.5 crore during the third round of e-auction of prestigious gifts and mementos presented to Prime Minister Narendra Modi.

The third round of the e-auction was held from September 17 to October 7 through the web portal www.pmmementos.gov.in. The proceeds of the e-auction will go to the Namami Gange Mission, according to the press statement from the Ministry of Culture.

1348 mementos were put up for e-auction in this third round, which has evoked huge interest among the public, who enthusiastically placed bids to get an opportunity to own a valuable piece of history. The highlight items of this round of e-auction included the sports memorabilia of the medal-winning Tokyo 2020 Paralympic Games and the Tokyo 2020 Olympic Games; models of Ayodhya Ram Mandir; Varanasi's Rudraksh auditorium and many other precious and interesting collectibles. More than 8600 bids were received for the items.

Items like decorative mace, a replica of the Statue of Unity, a Charkha and a bell received the highest bids in terms of bid value as compared to the base price. The maximum number of bids were received by the sculpture of Sardar Patel (140 bids), wooden Ganesha (117 bids), memento of Pune metro line (104 bids) and memento of Victory flame (98 bids).