NATO and Russia lay out stark differences on Ukraine crisis 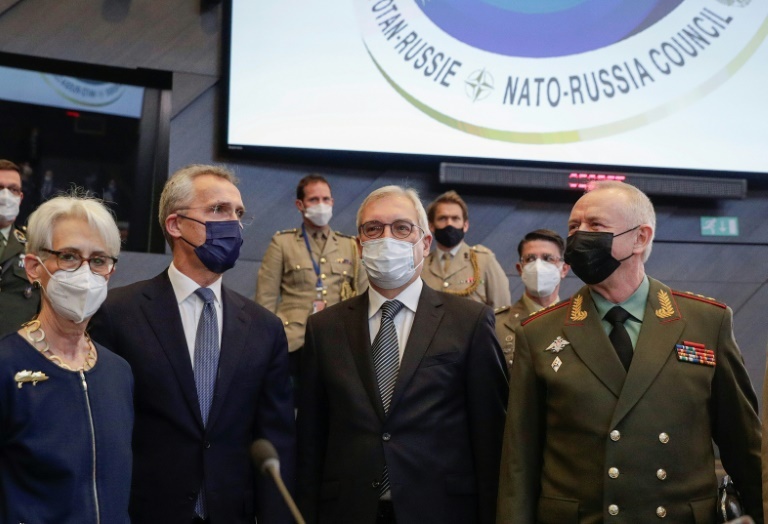 Meeting senior Kremlin envoys at their headquarters in Brussels, the NATO members said Moscow would have no veto on Ukraine or any other country joining the alliance, warning it would pay a high price if it invaded.

"Russia most of all will have to decide whether they really are about security, in which case they should engage, or whether this was all a pretext, and they may not even know yet," US Deputy Secretary of State Wendy Sherman said.

Putin's government has demanded the West to rule out accepting new members like Ukraine, Georgia or Finland on its eastern flank and has demanded limits on allied deployments in the former Soviet allies that joined NATO after the Cold War.

Russia's massive troop build-up on Ukraine's borders has forced Washington to engage diplomatically -- with bilateral security talks in Geneva on Monday, a NATO-Russia meeting on Wednesday and another planned at the OSCE in Vienna on Thursday.

But the Western allies have received no promise that Russia will stand down its forces -- which Moscow insists pose no threat to its already partially occupied neighbour -- despite threatening massive economic sanctions if the Kremlin unleashes an invasion.

Instead, the 30 member states invited the Russian envoys to return to Moscow and to advise Putin to join them for a series of confidence-building talks on limiting provocative military exercises, arms control and reciprocal limits on deploying missiles.

"Russia was not in a position to agree on that proposal.They didn't reject it either, but the Russian representatives made it clear that they needed some time to come back to NATO with an answer," alliance Secretary General Jens Stoltenberg warned:

"There are significant differences between NATO allies and Russia on these issues," he warned.

Stoltenberg said it would be impossible for NATO members to agree to Moscow's core demands for a new security order in Europe, and in particular added that Russia would have no veto on Ukraine's right to eventually join the alliance.

"Ukraine as a sovereign nation...has the right to self-defence.Ukraine is not a threat to Russia," he said."It is Russia that is the aggressor.It is Russia that has used force and continues to use force against Ukraine.

"And then they're building up, with around 100,000 troops, artillery, armour, drones, tens of thousands of combat-ready troops and threatening rhetoric -- that's the problem."

The West defends NATO's "open-door policy" towards potential future members, while Moscow is demanding a cast-iron guarantee that the alliance will not expand further towards its territory, seeing the westward tilt of one-time Warsaw Pact or Soviet allies as a threat.

Before Wednesday, the NATO-Russia council had not met since 2019.NATO and Russia broke off practical cooperation in 2014 after Moscow occupied and annexed the Ukrainian region of Crimea.

Russia's diplomatic mission to the alliance was withdrawn in October last year after eight of its staff were expelled on allegations of espionage.

But the former ambassador -- now a deputy foreign minister -- Alexander Grushko was back to confront Stoltenberg and Sherman, having earlier this week described the meeting as a "moment of truth".

After the meeting, the senior US diplomat said: "Together, the United States and our NATO allies made clear we will not slam the door shut on NATO's open-door policy.

"NATO has never expanded through force or coercion or subversion.It is countries' sovereign choice to choose to come to NATO and say they want to join."

Just ahead of the talks, Kremlin spokesman Dmitry Peskov said: "The continuation of NATO's open-door policy and the further advancement of NATO towards our borders is precisely what, from our point of view, threatens us.

"This is exactly what we are asking not to continue through legally-binding guarantees."

The allies have threatened massive economic and financial sanctions against Moscow if its huge troop build-up on Ukraine's frontiers and in Russian-occupied Crimea turns into a new invasion.

Peskov refused to be drawn on whether Russia could launch a military operation if denied."We would not like to throw around threats and ultimatums like American officials," he added.

Russia has put intense pressure on Ukraine since 2014, after a revolution overthrew a government that had sided with the Kremlin against moving closer to Europe.

Russia has seized and annexed the Ukrainian region of Crimea and Moscow backs an insurgency in eastern Ukraine in which more than 13,000 people have died.