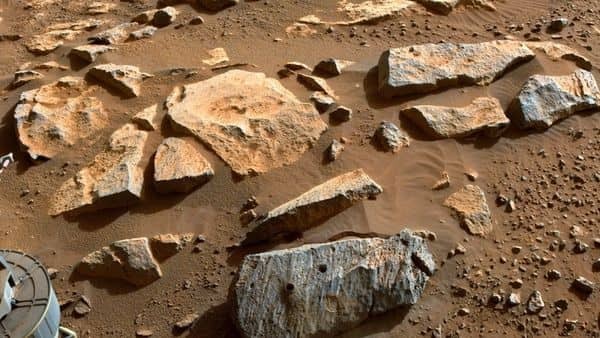 NASA’s Perseverance rover has successfully collected two samples of Martian rock and sealed them in airtight titanium tubes for eventual return to Earth.

Agency officials hailed the accomplishment as a milestone in the search for evidence of life that might have existed on the red planet billions of years ago, when Mars is believed to have been a warmer, wetter and more hospitable world. The rover’s first collection effort failed last month when a sample taken from another site crumbled before it could be placed into a collection tube.

“This is truly a historic moment," said Thomas Zurbuchen, NASA’s associate administrator for science in Washington, D.C., after the first sample’s collection. “We expect jaw-dropping discoveries across a broad set of science areas, including exploration into the question of whether life once existed on Mars."

In pursuit of any evidence of life signs, Perseverance is exploring an ancient lake bed called Jezero Crater just north of the Martian equator. The six-wheeled, $2.2-billion robotic rover landed there on Feb. 18 after a seven-month, 300-million-mile voyage from Earth.

The rover has been driving along the rocky outcrops and boulders of a half-mile-long ridgeline called “Artuby" that borders two geologic zones believed to contain the crater’s deepest and most ancient layers of exposed bedrock.

There the rover used its intricate drilling rig to extract two core samples from a flat, briefcase-sized rock—apparently a remnant of lava from an ancient volcanic eruption—that mission engineers nicknamed “Rochette." The rig’s hollow coring bit and a percussive drill are at the end of the rover’s 7-foot-long robotic arm.

The samples, named “Montdenier" and “Montagnac," were retrieved on Sept. 6 and Sept. 8 from the same rock and are 5.9 centimeters, or 2.3 inches, and 6.1 centimeters, respectively, in length.

Initial analysis of rock revealed that they are likely volcanic in origin, and contain salts that likely formed in the presence of water.

“It looks like our first rocks reveal a potentially habitable sustained environment," said mission project scientist Ken Farley, of the California Institute of Technology. “It’s a big deal that the water was there a long time."

Martian soil, called regolith, is an arid mixture of several minerals, including silicon, calcium and sulfur, NASA scientists said. They hope that rocks, however, might be more likely to retain traces of organic compounds—possible evidence of an alien biology, if any ever existed on the now-barren planet.

The rover carries 43 tubes into which rock samples will be placed over the next two years, with the expectation that a subsequent Mars mission will collect the tubes and return them to Earth.

The failed first collection effort highlighted the exasperating complexity of trying to work on another world.

The second attempt began on Sept. 1 and appeared to go smoothly. Photos transmitted to anxious mission engineers and scientists on Earth showed that the rover had successfully drilled a hole into the rock without shattering it.

But they waited to celebrate until additional images confirmed the first core sample was intact and could be safely stored.

“I’ve got it!" the space agency said in a tweet. “With better lighting down the sample tube, you can see the rock core I collected is still in there. Up next, I’ll process this sample and seal the tube,"

While the Perseverance rover lingered over its first successful rock sample collection, the Ingenuity helicopter—ferried to Mars aboard the rover—continued to explore new vistas for possible exploration.

In a series of flights, it captured aerial views of sand dunes, boulders and rocky outcrops of the nearby “South Séítah" region of the Jezero Crater.

During a flight on Aug. 4, it relayed a view of Perseverance hard at work.