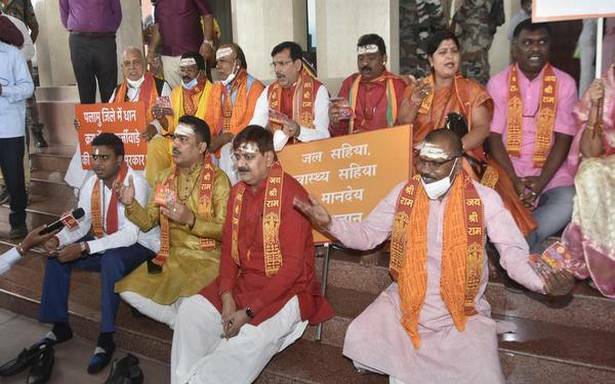 Protesting over the allotment of a separate room to offer namaz (prayer) for Muslim MLAs in the Jharkhand Assembly, Opposition Bharatiya Janata Party (BJP) legislators on Tuesday chanted ‘Jai Sri Ram’ and the ‘Hanuman Chalisa’ inside and outside the House while Speaker Rabindra Nath Mahato repeatedly urged them to allow the proceedings of the House to take place.

On Tuesday, the BJP legislators first sat on the stairs at the Jharkhand Assembly’s entrance gate, chanting with drums and cymbals. Narayan Das, BJP MLA from Deoghar, recited the ‘Hanuman Chalisa’ with sandalwood tikkas on his forehead and earlobes, wearing a garland of leaves. As soon as the Assembly proceedings began, they trooped into the well of the House. Despite the Speaker’s repeated requests to allow the conduct of the House, the disruption continued during Question Hour, which led to an adjournment till 12.30 p.m.

“No disrespect of the chair will be tolerated. This pains me. If you are angry, you may beat me up but please don’t disrupt the House proceedings,” Mr. Mahato said to the protesting BJP MLAs. “The chair is not a subject of mockery. Even yesterday you behaved badly.”

On Monday, BJP legislators had chanted ‘Jai Sri Ram’ and the ‘Hanuman Chalisa’ sitting on stairs of State Assembly.

But the BJP MLAs said, “The Speaker is supreme in the Assembly but it hurts when we see his behaviour is not impartial in the House.”

Amid the din, Mr. Mahato also asked the BJP MLAs to respect the ‘Hanuman Chalisa’ and not to use it for “political gains”. He also said, “May Bajrang Bali grant wisdom to the protesting legislators.”

Earlier, through a notification issued on September 2, the Jharkhand Assembly Speaker had allotted a room (number TW348) for Muslim legislators to offer namaz. The 81-member Jharkhand Assembly has four Muslim MLAs. Protesting over this, BJP MLAs of the State began demanding a Hanuman temple inside the Assembly premises and separate rooms for followers of other religions to offer prayers as well.

Meanwhile, the BJP MLA from Bisfi in Bihar’s Darbhanga district, Hari Bhushan Thakur Bachaul, on Tuesday demanded space and time in the Bihar Assembly to recite the ‘Hanuman Chalisa’.

“To offer prayer to Bajrang Bali, we too need time and place on every Tuesday so that all religions will get equal respect,” Mr. Bachaul said, adding that he would meet the Bihar Assembly Speaker soon in this regard. However, former Bihar Assembly Speaker and now Education Minister in Chief Minister Nitish Kumar’s Cabinet, Vijay Kumar Choudhary, said, “Such issues should not be politicised.”