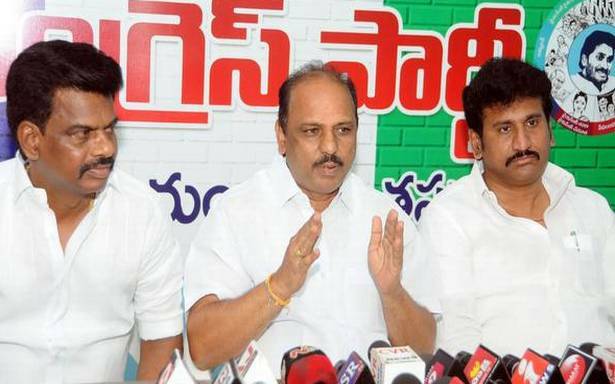 TDP national president N. Chandrababu Naidu could not complete the Rayalaseema irrigation projects despite being the Chief Minister for 14 years and also could not get the rightful allocation of Krishna waters to the region, alleged R&B Minister M. Sankaranarayana here on Saturday.

Addressing the media at the YSRCP office, Mr. Sankaranarayana reacted strongly to the criticism of Chief Minster Y.S. Jagan Mohan Reddy by the TDP leaders during their conference here on Krishna waters.

The Minister, along with Hindupur MP Gorantla Madhav and Rapthadu MLA Thopudurthi Prakash Reddy, claimed that 90% of the works on the Rayalaseema projects such as the Handri-Neeva Sujala Sravanthi had been completed during the Congress term under the leadership of Y.S. Rajasekhara Reddy.

“The TDP had completed the remaining 5% works,” the YSRCP leaders said.

“It was during Rajasekhara Reddy’s tenure as Chief Minister that Kuppam too had received water. The TDP government had the dubious distinction of terming agriculture as useless and converting all irrigation projects into drinking water schemes,” said Mr. Prakash.

“Devineni Umamaheswara Rao, who had asked the government not to release water to Rayalaseema, was given the irrigation portfolio by the TDP,” the MLA alleged.

Mr. Madhav said there was no need to react to the comments of the TDP as its own leader J.C. Prabhakar Reddy had given a befitting reply.