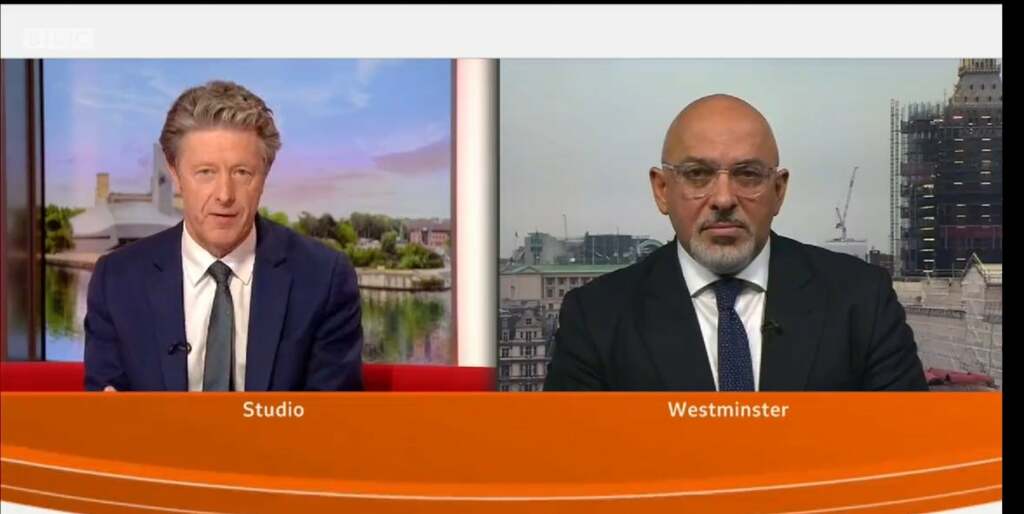 The new Education Minister has had an absolute ‘mare of a BBC Breakfast interview this morning.

Nadhim Zahawi appeared on the show to discuss the new (ish) government £3,000 premium to encourage talented maths and science teachers to go and work in disadvantaged areas as part of Boris Johnson’s nebulous “levelling up” programme, but ended up needing his own levelling up to improve his performance.

Questioned about how teachers will benefit from “higher wages” while their wages are actually frozen amid a period of inflation, Zahawi waffled about teacher’s average salaries before mumbling and stuttering:

“The increase is about seven percent because teachers have a path to increasing their salary as they improve and extend their experience.”

A befuddled Charlie Stayt who was interviewing the minister replied: “Okay, if I may I‘m going to jump in because I don’t really understand what you’re saying.”

Zahawi nodded and said: “Sure”.

Reacting to the clip, people found it pretty awkward and praised Stayt for his intervention:

When they say "let me be absolutely clear" they will be anything but clear in their answer.

Zahawi absolutely roasted there by Charlie Stayt. A like for like replacement to Williamson. Frightening for Education.......#ToryShambles

Charlie Stayt to get a medal from the RNLI for saving Nadhim Zahawi from drowning in his own words. https://t.co/9qbOh76Fca

New Education Secretary @nadhimzahawi is stumbling and floundering under intense questioning by Charlie Stayt on #BBCBreakfast. This is what happens when you challenge this governments rhetoric and hold them to account.

It was PAINFUL 😖 the best they’ve got to offer our kids & their future, Zahawi 🤦‍♀️

Charlie Stayt: ‘I’m going to jump in because I don’t really understand what you’re saying if I’m honest with you’

We cross live to the #BBCBreakfast studio where Nadhim Zahawi attempts to answer Charlie Stayt's fact-based questions about infection rates in schools and teacher pay. pic.twitter.com/EyuXvTxpo8

Nadhim Zahawi the new Secretary of State for Education has just achieved the impossible.

He’s just made it look like Gavin Williamson knew what he was doing.#bbcbreakfast #nadhimzahawi #bbcnews pic.twitter.com/OKHI2SsKOb

Zahawi also appeared on Sky News this morning and defended Johnson’s conference speech, which was criticised for being rather joke heavy and policy light.

Niall Paterson - Usually after a PM's speech we've pages of analysis on the policies announced, instead we had pages on the jokes he made.. 300000 children are going to be pushed into poverty.. why did he skirt the biggest issues of the day

Then he put on his old vaccines minister hat to talk on talkRadio about whether the UK should introduce compulsory coronavirus vaccines:

Former Vaccines Minister Nadhim Zahawi says Canada's mandatory jabs would not be needed in the UK, despite already bringing it in for for UK care workers.

"We don't need to mandate vaccines in the UK, as millions have come forward already."@JuliaHB1 | @nadhimzahawi pic.twitter.com/ylmNa217B4